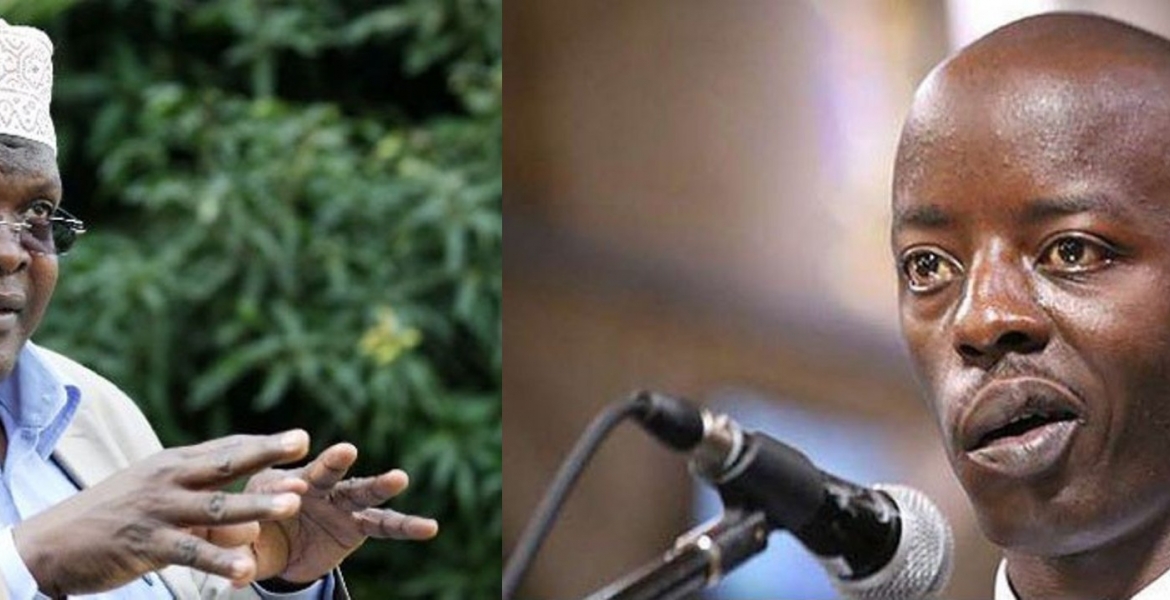 There were fireworks on Twitter after deported Kenyan lawyer Miguna Miguna was embroiled in an online spat with Raila Junior, the son of ODM leader Raila Odinga.

The online exchange began after Miguna trashed a tweet by Junior, where he suggested that Nairobi should not have been made a county but a metropolis to facilitate service provision.

“Now, in my opinion, Nairobi should never have been a county, rather, it should be a metropolis and Lavington, Kileleshwa, Westlands, Langata, Eastleigh, Dagoretti among others should be different boroughs. It’s about service distribution to the communities,” he proposed.

In response, Miguna dismissed Junior’s argument, suggesting that he gained nothing from his studies in the United States.

“You are as confused as your con-man ‘father’. Services are now distributed by changing the name from county to borough. Your cowardly father used public money to take you to the USA for studies and you only returned with the word borough. Go sleep,” he retorted.

Junior replied by questioning why Miguna was now saying Raila is his father while in a tweet last month claimed that his biological father was Joe Ager.

“I thought Joe Ager was my father, how did he [Raila] sire me if he was castrated?” posed Junior.

He continued: “I was actually asleep when you tweeted, well me being in Kenya and you in baridii lands. I went to school in Wales and I believe the MSc In finance I have differs from your assertions.”

Junior also taunted Miguna by saying: “Miguna pretends to be so intellectual, he couldn’t even log in to his Facebook account on his computer, we literally had to show him how to retrieve a password nonsense fellow Nkt  Fuo ka chieth.”

All you two “ washenzi kabisa”!!!. ones’ mouth is tilting to the left and the other one is constantly loose. At the end of the day all of them cannot control their lips

U think merely spelling ur name as "kikuyu" makes u special? Ati that's synonymous to Governance? or state power? Tell that to empty headed Nairobi slay queens whose only value they add to Kenya is entertaining half-baked fellows like u.

Instead of u fool castigating Miguna,u predictably rushed to Raila junior, mang'aa wewe!

Shame on you for daring to insult Raila Junior’s disability! You hit your childish self way below the belt, you heifer!?! Rethink your naive attack on Junior! Don’t be so silly and stupid!!

All you two “ washenzi kabisa”!!!. ones’ mouth is tilting to the left and the other one is constantly loose. At the end of the day all of them cannot control their lips

When people whose education is limited to only basic reading,and understanding see this kind of nonsense between so called intellectuals -devoid of academic,and scholarly substance,they wonder if they really missed anything by not furthering their education.
It is shameful to see adults sparring in public arena with vitriol,and abusive language,for the sake of humiliating one another.Then we wonder why our kids behave badly...

Quite a number of Kenyans suffer from same kind of intellectual superiority complex but have NOTHING to show for it besides the books they crammed in school. If your education can not help lift someones life,or community or country, then your education is useless.
Out of curiosity though I was wondering whether Kibera (Kibra..what a silly name) should be a borough in Juniors eyes.

Come on miguna, tells us more about baba and how many more of the children are not his

Grown men! MM always has a point but unfortunately it's almost always lost in translation. Odinga's son's vision is obviously borrowed from Western infrastructure and he foolishly volunteered the information that he was schooled in Wales, where their counties are sub divided into boroughs. So MM has a point, in my humble opinion.