'I Have Sex in Car, Kitchen with My Husband’, Kenyan Pastor Says in Viral Video 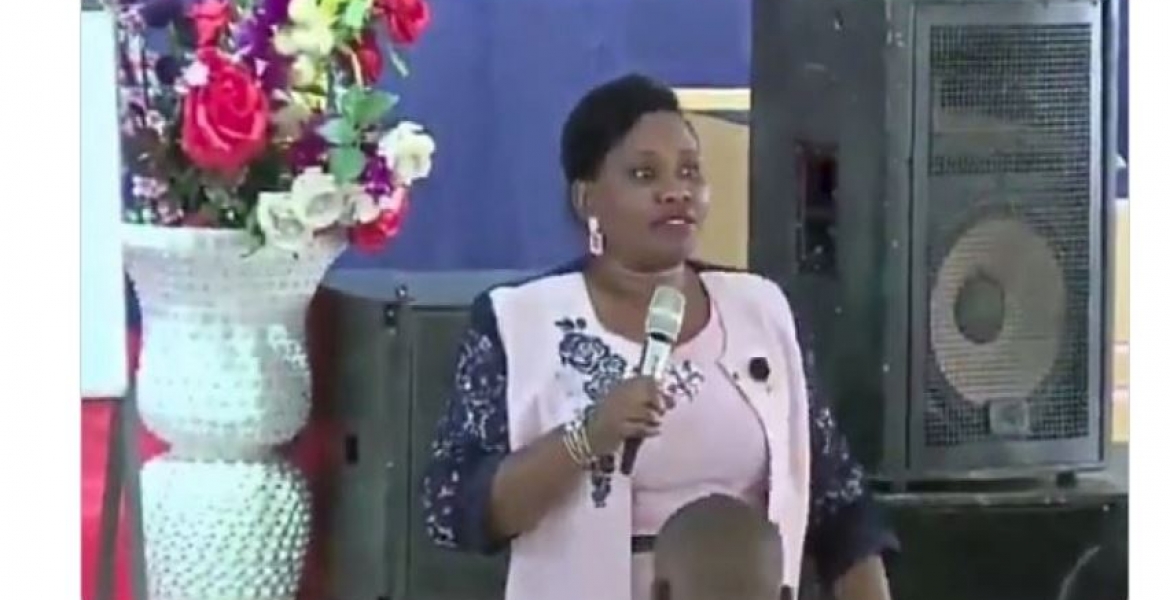 A video of a female Kenyan pastor talking about sex has gone viral on social media, sparking hilarious reactions from Kenyans online.

In the video, Pastor Susan Munene of Overcomers Hope Ministry in Kasarani, Nairobi says sex is the only game made by God and couples should have it anywhere. She goes ahead to reveal that she haves sex in the car and kitchen with her husband, noting that this is the secret to the strong bond between them.

“Sex is the only game that God created, think about it, Football, Rugby, Netball are all man-made” she notes.

(If there is anything that keeps me and pastor (referring to her husband) together, it is sex, we can have sex anywhere, in the car Twa Twa, Kitchen Twa Twa. Everywhere.)

In an interview with Ureport on Tuesday, Pastor Munene said she learned the video had gone viral online.  “It’s a good video for me because that is something I have been poking over and over again, I am surprised that this is when it is coming up and in all my meetings, that is what I preach,” said Pastor Susan.

She indicated that the video went viral after a couple in the US sent it to comedian Daniel Ndambuki, alias Churchill.

“Someone picked the CD and they went and practiced the message and it worked for them then they gave another couple. So the couple they gave are the ones who actually took the highlight of that CD and sent it to one of their friends in the United States who now sent it to Churchill,” she noted.

Pastor Munene said the video was recorded two weeks ago during a couples meeting whose theme was enjoying sex in marriage.

“A man actually posed a question and asked me… because when married women get annoyed in the marriage most of the time, they cut off everything. So the man asked me ‘Pastor how many times should a married couple have sex,” she explained.

Now they're into selling pornography, previously it was false promises of wealth, resurrection, cure of disabilities, name it. They won't shy from peddling anything to grow their pseudo religious business enterprise. Cocaine, meth or even arms dealing could be next. They have broken up and destroyed families by isolating partners for exploitation, I know, I've been a victim. But desperate, culturally deprived Kenyans continue to trek into these houses of abuse. Lord help us.

Very good!! Next time do it in your church during the overnight session, do it on altar and bathroom too!! Life is too short pastor!!

Am no Atheist...
First... how exactly did the one and only Immaculate conception of Jesus occur.
Second... Was Jesus a virgin when he died?
We know nothing about Jesus teenage years... his sexual activities if any.
I mean all we know about Jesus Christ besides being a Son of God is his conception and his life after 30 years.
He died sometime between 30 and 36 years old.
Think about it...
It's not fair being sent to hell for crimes you committed btw the day you were born and when you hit 30 years.
Anything after 30 is fair game

“A man actually posed a question and asked me… because when married women get annoyed in the marriage most of the time, they cut off everything. So the man asked me ‘Pastor how many times should a married couple have sex,” she explained.
The pastor explained the"Wrong" answer.She is mainly pointing at locations one could have TWA TWA TWA,failing to note that the man was asking about frequency.
Women know that the frequency of TWA is a function of what the man does in helping out sustain the relationship.
This may or may not play in african families,but some women say that "aman cleaning the house,and washing dishes,changing dippers is stimulating"and thus a sure promise of hot and steaming TWA twa...
It has been said that,all a man needs for sex is aplace,and same cannot be said of women.And yes Iam mindful that some women also just need a place,when cash is right:)
Anyway, frequency does to equal to good sex.What counts is the quality.And Iam not sure the very reverent pastor is the person to go for that answer.My two cents.

I was waiting to Maxiley explanation to this. Well when your spouse is giving you excuses on why there is no Twa, twa, then it means the problem might be you men. Women sexual organs are not like yours, they needs kumbembelezwa:-). We do not get "wet" instantly like you do and just want to be "twatwad". Nyinyi you come with vunjo ingine, then you expect wa mama wainue miguu, and then after that expect kusikia "oh it was great". Until you learn the anatomy ya mwanamke, what sex is all about (not the porn type) then you will get twa twa everywhere. Listen to your mamas needs and how to get it done , that's it , there is no mystery!. Women kwanza like twa twa more than you guys. I'm lucky to have a twa twa mate who listens to my needs and knows the right approaches /mood setter etc and he gets twa twa very frequently ! Hiyo tuu

Well said. Female sexuality is quite different from male sexuality. Women are not turned on by the same stimulus man are. You have to awaken the libido women. Its laying latent.And you do that by slowly doing the right thing,and that is listening to her needs,which include taking care of the watoto,to bills,the seduce the to the be room by being flowers, romantic music, loving words... then gently touch her paying attention to the parts she likes.Most african men dont know that women hardly orgasm through penetration.You have to be nice to her,ask the right questions at the right time, in the right monent,and you will find her"hot spots".
Anyway like I said, the pastor it not the right person to divulge twa twa formula. For that, start with Dr. Maxiley.

You did a damn good job. If nothing else,as awoman your perspective reinforces what I have said. Now they cannot attack me and say," you Maxiley you are aman with a"drillerscope" like ours how do you know what women want":) Yes I know what women want.If you are getting by fine with scanty information,think of how much better you would fill with full knowledge in that department.Its like working hard and getting a C all the time,then suddenly you learn more,and incorporate in your "work"/TWA and voila A+ appears...satisfactorily,I might add. and madame fires the Shamba boy.

Most men would consider her past that age.

Somebody once said that discretion is the better part of valor. Your teenage daughters are also reading and listening to the pastor.

Not that I know, or that am a know know, tell it all, or simply, a "Mjuaji." But apart from professional sex-ecologist, our African traditions had their own experts(experienced old men and woman), whom, maybe after centuries of soul-searching, behavioral patterns of girls and or women, decided to chop off the ka thing after monitoring a trend of sexually hyperactive girls gone amok, every they hit teen age. That is why tribes Kikuyus and Maasai, whose cultures are almost the same owing to their impromtu raids and village ambush. And although other tribes like Mijikenda, Somalis, Boranas, always kata kata the ka thing, that shows the danger of women who got on heat and couldn't trumpet it due to cultural believes. Thats where this twa twa pastor comes in. Na wale hawana wamme wakuwachora wakati pambazuko wa moshi unapopaa hewani? Wanaketi pwee na nyangume akion hivyo, mmmmm. Mara nyege zilizomuasha binti huyo zikamgeuka ndugu yetu akaingizwa kidimbani: ikawa ni hatia.

@MujuAji, probably our ancestors knew more than we know today.For example we are just now learning that the "kathing" as you put it is nolonger "kathing" it is much larger that what is visually observed...
We also know that "kathing" is the only organ designed purely for pleasure.So I think our ancestors knew this,and pleasure being what it is, they curtailed women from having it from some one other than the husband.It was a control mechanism.See man could still get his pleasure,by penetration.
Iam not saying that women dont like to be penetrated.Its natural.But for them to enjoy,and probably reach the "pinacle of pleasure",more attention should be paid to the "kathing".
See unlike men, women cannot get turmed on sexually looking at a naked man.In fact some find it disgusting. And again Iam not saying that they dont appreciate male wellbuilt physique.Two different things One is artistic,another is sexual.
Men have always looked at women's sexuality,through their eyes.Thinking that women are just like them sexually.This is wrong approach.They are not. Find out what they want by getting their trust then ask them. Ofcourse knowing the nature of this subject of sex,some will be truthful,some will lie,and some will get made when asked.
But stay turned,SCIENCE is making headways in the female sexualty department as women shade of the "inhibition,and embarrassement "of the subject and scienfitically search for the truth. When we are all educated in this department, TWA TWA TWA will bring earth shuttering,blissful pleasure,know to homosapiens-that includes homosexuals as well.

She is teaching to the converted. Someone once said that to be a good spouse one has to: "be a maid in the living room, a cook in the kitchen and a wh**re in the bedroom"! The problem today is we demand equality in everything and so we should, lakini some "tinks" were just made to be so!

Not true If the quality of the act is not good increasing the frequency or making time for it just creates more problems.This is not practice makes perfect scenario.Her explanation makes an assumption that both partners jive in that area.Well that is not always the case

@GuestI tell us how you have successfully managed to navigate this land mine called sex so well...