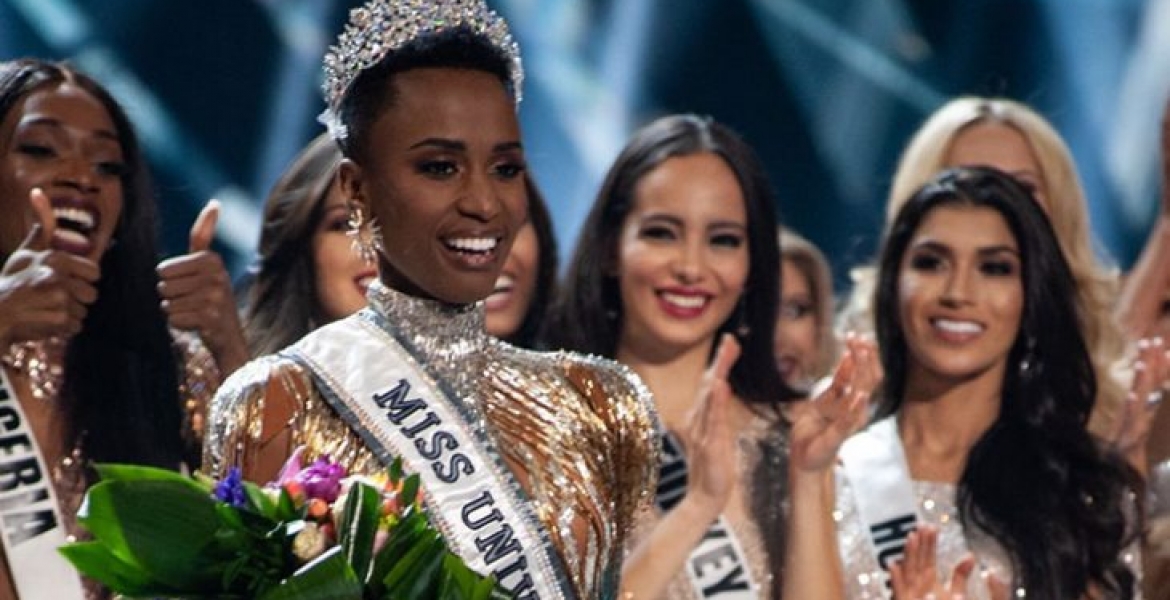 26-year-old Tunzi, who is also Miss South Africa, won the crown after impressing the judges and fans through the different rounds in the contest, ahead of runner-ups Miss Puerto Rico, Madison Anderson, and Miss Mexico, Sofía Aragón.

Tunzi was applauded during her closing speech in which she talked about wanting to empower young women to feel confident. "I grew up in a world where a woman who looks like me, with my kind of skin and my kind of hair, was never considered to be beautiful. I think that it is time that that stops today," she said.

She trumped over 90 other contestants from around the globe in the 68th edition of Miss Universe, which was held in Tyler Perry Studios in Atlanta.

Miss Thailand Paweensuda Saetan-Drouin and Miss Philippines Gazini Ganados, who were considered favorites ahead of the contest, did not make it to the final 10. Miss Myanmar Swe Zin Htet made waves last week when she announced she is a lesbian, becoming the competition's first openly gay contestant.

"I have that platform that, if I say that I'm a lesbian, it will have a big impact on the LGBTQ community back in Burma," Htet told People magazine. Homosexuality is illegal in Myanmar and is punishable by up to life in prison.

. "I grew up in a world where a woman who looks like me, with my kind of skin and my kind of hair, was never considered to be beautiful. I think that it is time that that stops today," she said
I wonder if she could have won if she had said that,"for alongtime,white people did not consider black people like me to be beautiful".
Anyway,good for her. However, I have always taken the stand that this kind of contests do not add value to humanity.Iwould rather they be judged by their brains,and not on youthfulness,and looks. Besides that, Iam not sure if apanel of 7 people are" qualified" to determine the most beautiful women,by just looking, and throwing afew soft ball questions. My point is that ,what are the chances that Miss.Tunzi would have won if all the countries in the universe had to voted? So its not very convincing,in my opinion for 7 people to subjectively decided who the most beautiful woman in the world is. But if judged by their brains,we could use test like SAT where the best scorer in indisputable,world over .My 2 cents

You can keep your hate with you. No one wants it.

Are you refering to what miss universe was quoted as saying,about her hair and skin when growing up?

@ Mimi, please read @ Formery guest 2 comment,bellow.She read my post and did not see any hate(Ihope).You must be projecting your hate.Why dont you tell us the validity or there lack of these beauty contests?That's the issue in my post.
If you truly see hate in my comment,then you really need some mental check up.I like to question. That's one of the best ways of arriving at the truth,and dispelling steriotypes,and counterproductive traditions,superstitions,and mores.

I agree, these pageants only exacerbates the same thing she is peddling against in her speech here which is standardizing beauty. The same way she felt unworthy, is the same way young girls watching this and do not look like her regardless of race or creed are feeling if they can't reach those standards, if they are not tall enough, dark enough , cannot afford European wigs, have wide hips, are not as thin as a stick etc. These are useless displays and should be done with.