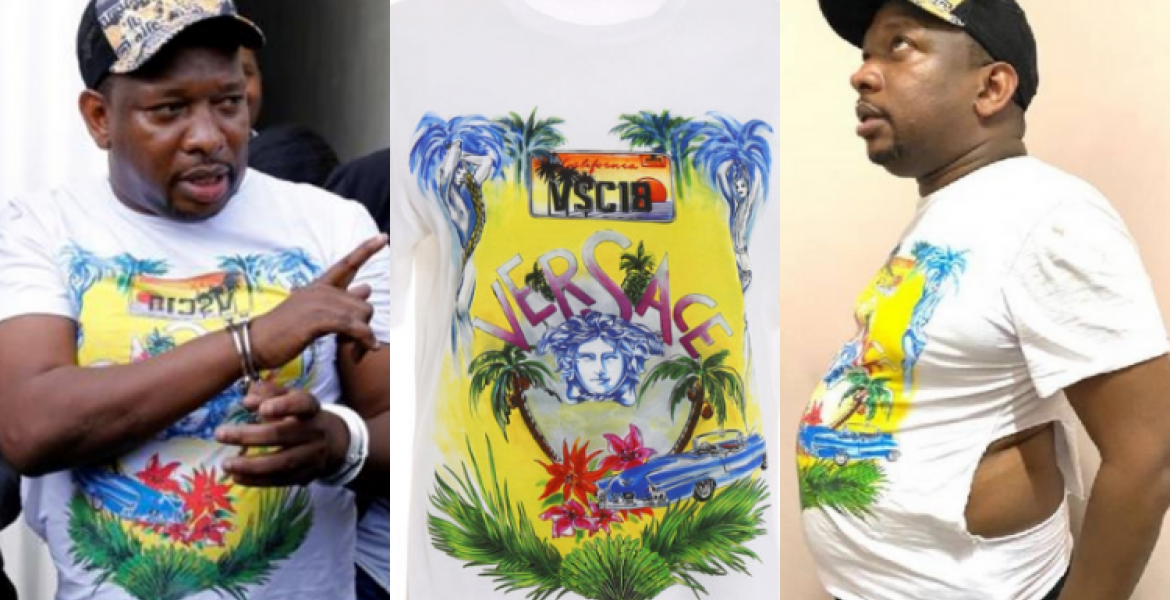 A search on the internet revealed that the t-shirt, which got torn during the arrest, is a tropical logo print T-shirt with a cotton crew neck and goes for $531, according to global fashion store Ikrix.

Sonko, who was released on bail on Wednesday after spending five days in police custody over graft accusations, leads a flashy lifestyle, especially when it comes to dressing. He has never shied away from showing his love for Italian fashion powerhouse, Versace products including shoes, t-shirts, jackets, chains, and belts, among others.

Sonko, 43, recently caused a stir online after he splashed photos of his gold-coated Versace-inspired dining room table and seats, in what some social media users termed as the highest show of opulence by a public office holder.

As expected, some Kenyans online combed through the internet and established the cost of the t-shirt, which according to Ikrix, was designed for the female gender.

Social media user @mmnjug said: “Kumbe this mtumba-like tee is a Versace... Lesson: You can buy the latest fashion but still have bure style!”

We can greatly reduce corruption if all public funds,and expenditure were made public,and have a panel of financial experts track the transactions as wananchi throw in their insights.This way we are all accounting for our taxes/public funds.With many eyes checking the legder,chances of someone trying a fast one is drastically reduced.
There is practically no accountability in Kenya,and what passed as one is slower than molasses on afreezing day.

Is he pregnant? Ugh that body looks bloated and screaming for help from Alcohol abuse

Throw him and his big belly somewhere in Kīamwathi or Gīakaibīi with the locals and he fits right in. Ati Versace t-shirt surely, imechorwa mzungu hapo kwa tumbo. Colonization of the mind. Why can't he buy from the local market?

Rot in jail Sonko. You have been showing off all your stolen public funds thru your jewelry, furnishing, etc. I hope this con man is indicted and sentenced to a long prison term where he belongs. No catch and release please. This case should be swift due to overwhelming evidence available. Lock him up!

You will not find someone who has WORKED HARD for his money spending money on sh** like this. Sonko's show off is nauseating. He is an airhead too and it is appalling the people of Nairobi trusted this imbecile to run the county. Ugh! You deserve what you are getting right now.

People like sonko we have all over our governing sistems. Cs, Governors, Mps, Ps & Heads of parastatals. To clean all this will take him President Uhuru, many years to come. So we need our President to stay power, whether Prime Minister or extended terms.