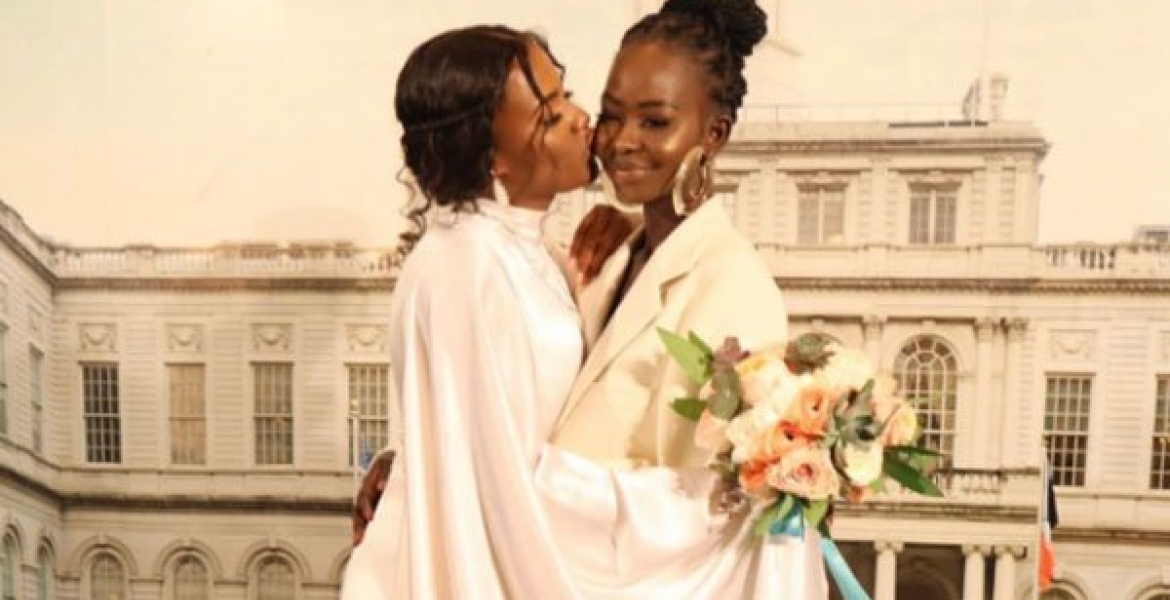 Kenyan-born South Sudanese model Aweng Chuol has tied the knot with her gay partner, Alexis weeks after the two got engaged.

Aweng and Alexis exchanged marriage vows in a private wedding ceremony held on Thursday, December 12th. Aweng, who is based in New York, the United States broke the news about her marriage on social media, where she shared photos of their wedding ceremony.

“Married my best friend today. I am. GEEKED,” she captioned the photos of herself and her wife.

Aweng, who is a law student when she is not walking the runways of the fashion capitals, revealed that the wedding was a private ceremony attended by only two other people.

"We got married. We had three people in the room with us. And four people at the entire ceremony. It was for us. But wanted to share my happiness with y’all," Aweng wrote on Twitter.

Are there people out there still saying it's unafrican to be gay other than uhuru?

It's extremely UN-African to me. If God gave permission to take them out, I would bludgeon them out.

It's not a matter of if it's HOW SOON you'll find out that free speech is not a protection against screaming "fire in a crowded theater". You have a track record of advocating and in this case talking about killing others who don't hold your narrow minded views.

You sound very Shallow minded and without idea. So CYI: Go Read the Bible about Sodom and Gomorrah; and get Straight insight.

Google this Nubian's images and you will know that she is the Ugliest model and lezzy ever on earth. Sympathy to her so-called "wife".

The poor girl may have learnt about gaysm while in Kakuma camp! I can't blame her much considering the tuff kind of life people go through there! She's geeked while I am jeezed! It's Her life though.

At 21 you have neither the experience nor the knowledge of who you are leave alone get married.Find yourself and date real men then decide which you prefer