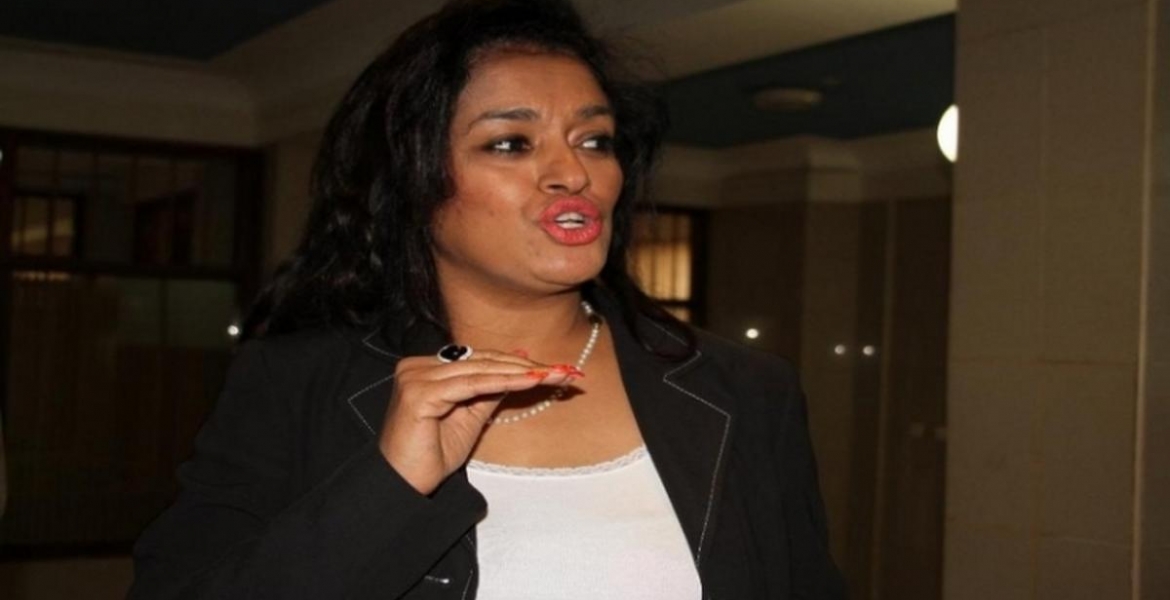 Nairobi Woman Representative Esther Passaris was on Sunday under fire from Kenyan on social media after she told off a Twitter user who condemned her for seeking medical treatment abroad.

On Friday, Passaris announced on Twitter that she was recuperating after she underwent successful spinal surgery at an Indian hospital on January 2nd.

“I flew to Ahmedabad, India on 31st December, 2019 and successfully had Spinal Surgery the following day at CIMS Hospital. I thank God for the Gift of Life, my family for their unconditional love and everyone who whispered a word of prayer as I went in,” Passaris tweeted.

Her tweet did not go down well with a section of Kenyan online users who said that being an MP who sits in the Parliamentary Health Committee, Passaris should push for the improvement of facilities in local hospitals instead of seeking medication in a foreign country.
Twitter user George Gathecha, wrote: “You should stop posting this because, how do you think people from slums feel yet they can’t afford Kenyatta National Hospital KNH?”

In response to Gathecha, Passaris claimed that she spent KSh.50 million campaigning to be elected to her position and he should “man up.”

“What are you doing about it? #ManUp I invested 50 million to be elected a leader. I served way before being elected. At 55 #OfficiallyMadeOfTitenium because of sacrifices I made. As a member of the Health Committee we shaping the Presidents #AgendaFourKe #UHCKe being crucial,” said Passaris.

Her comment angered KOT, including rapper King Kaka of the ‘Wajinga Nyinyi’ hit song who criticized Passaris for being “selfish.”

“@EstherPassaris shame shame Shame. The talk should be on how we have made our health reliable to the point you are getting your surgery at KNH. Wewe Uko Hapo unatuambia juu ya 50million. Stop being selfish for once , just for once and serve the people who put you there. Shame,” wrote Kaka.

@mmoywaywa tweeted: “This is so sad @EstherPassaris.  So shameful that I am even ashamed to call myself a Kenyan who voted you in.. Please enjoy while it lasts.”

@OjRobbert stated: “Waah! Kenyans Lets wake up. This is too much arrogance from an employee we pay with our money and they do nothing.”

@FatmaYabdi asked: “So we ought to be nice to politicians because they ‘invested’ 💰 to be elected? Really.”

@Meleas7 said: “Do you understand the meaning of investing and if so does it mean you were expecting returns and if that is the case then thanks for being http://honest.Now  I can vote for Nganga to complete the circus.”

@JedielKimath wrote: “Passaris is just a result of a rotten and broken system. Talking of investing 50 million in elections, too arrogant in did. Then talking of agenda 4 to cover up for the failed system.”

@Aseka_Oluchina said: “Plus you aren’t doing anyone a favor by running for office! If you used 100 billion for campaign, it was your decision. Live with it. As an elected leader we’re expecting you use the services that you want us to use! If you can’t, resign.”

I have said this before;I dont blame the politicians.I blame the electorate who VOTE for them.And I cannot accept that the lot of representatives we have now are the best we have among all politicians.This lot was just good at conning the masses.
Now what do we do to rectify this gross error? We keep quiet,swallow our dissapointments,and patiently VOTED them all out.
We have listened to their lies far too long.If we elect these do nothing ,self enriching crooks again in 2022, we have ourselves to blame and should not cry when they do not deliver.
If we want thinks done, we have to demand it from our leaders,or VOTED them out.It is that simple.

Maxiley. You're judging voters. Why? Because I have read your comments here on Mwakilishi and Noted clearly: How you've been "Voting for EXTREME Immoralities like Homosexuality and Destruction of Marriages" compared to Passaris' meagre ones. So please remove the LOG in your eye first.

@ Guest1 how can you deny the fact that voters voted for people who do not deliver.
I have to assume that you are of asound mind.Please re read my comments again,and tell me who I sent to mount another luhya's wife.I have espoused rights for all.Including homosexuals.Mindful that the dont harm anyone.
And please keep your religion to yourself or share it with your ilk.Respect other peoples'faith.Including mine.Let's try to eliminate what harms society,such as crime,insecurity,and lack of freedom of expression,and speech.We should also encourage people with sound mind to make choices that do not harm society.And if they dont,then prepare to suffer the consequences.How about that.What did I do wrong.

We are "demanding it" now, here in our expressions....this way. Please share a more effective way of demanding it if you can.....or better, please LEAD us in doing so.

For starters,any public official embroiled in any scandal should not hold office till the"mess" is cleared.Public should go to his office and demand that he clears his name before he,sets foot back in his or her office.Paint some more pigs will blood like paint and again release them at the offices of the suspected public looters.This should be relentless.Thats the start.When this step is successfully done.I will offer the next step.
Unfortunately,Icannot lead this public protest now,but later.

survival of the fittest. cry foul instead of working minding own business we wasted tim in discussing what we cannot change .clever

Thanks Passaris. I hear you telling us you bought your way to Parliament. So you bought the votes that put you there. If that be the case, you don’t need to be accountable to anyone. After all, your money put you there. Our votes do not matter. C’mon mom, now we know. Tell that to us come 2022. That’s why you and your kind do not care for wananchi. All you care of is to get rich through whatever means so that you can buy the poor people’s votes that you helped to make even poorer. Tell us more. Educate us of what you do to us to find your way to the top. We are here listening. Get well and return to the Kenya of poor hospitals and brag about your good treatment in India. Welcome back mom.

The same case with sabina muranga County rep, she traveled to Dallas TX to give birth and yet she is the chairman committee of health, sane to them

Passaris was never a sharp one. Her high yellow color is all she ever sold.

Your 50m investment is doing well... medical insurance...Spine surgery is no mean feat, the travel bills, the hotel bills...including your assistants and may be family....dining and wining...that bill alone before we count the salary and benefits you get.... ROI not doubt superb....ALL ON OUR BACKS....and then rubbing it on our poor faces as we struggle to buy panadol while hoping and praying for a thou to go to a dispensary to be attended by a clinical officer, if not a nurse ....mutigakua... SAD! Do you even have an iota of Shane?

I wonder which guy blew her back 😳😁