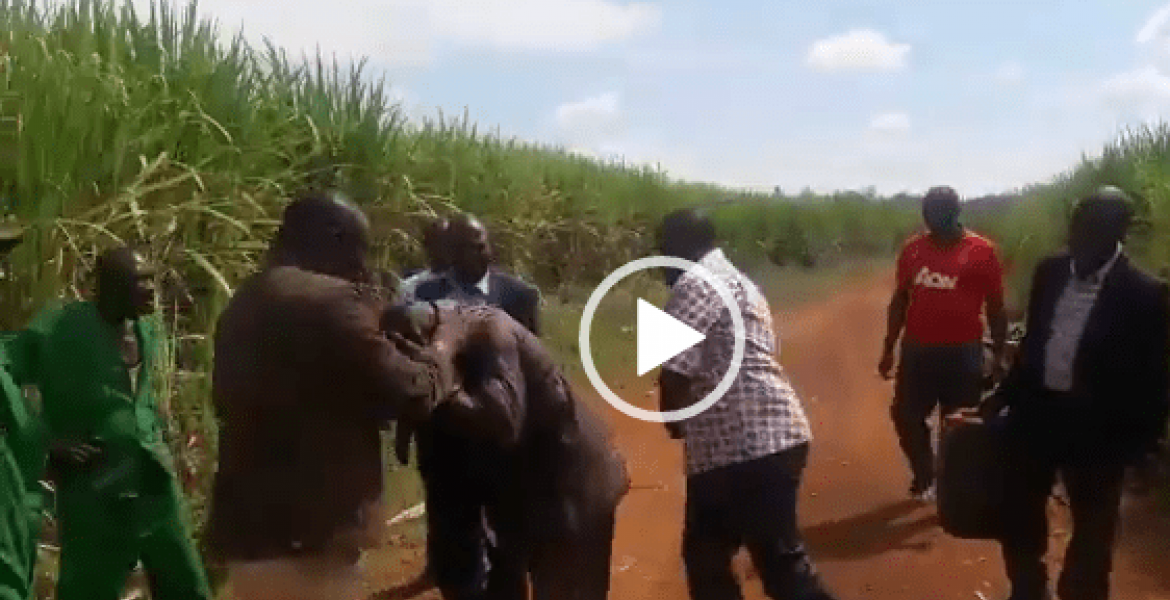 A video of National Assembly Chief Whip Benjamin Washiali raining blows and kicks on a man in Mumias, Kakamega County has gone viral on social media.

In the undated video clip recorded along a road in a sugarcane plantation, Washiali is seen slapping, punching and kicking the man whose identity is yet to be established. Washiali, who is the Member of Parliament for Mumias East Constituency, is ably helped to beat up the man by his aides.

When contacted for comment on the video, Washiali dismissed it as an “old clip” captured in 2015. He claimed that the victim was busted siphoning fuel from a tractor that was working in the adjacent sugarcane farm.

The video sparked heated reactions on social media with many online users calling for his arrest and arraignment for assault. Others want the ruling Jubilee Party to strip him of the Chief Whip position.

Lawyer Miguna Miguna tweeted: “Totally unacceptable! So, the young man is not supposed to have money? When he does, he is physically assaulted and brutalized. Ben Washiali should be publicly arrested and frog-Matched in shame by members of the public to Kodiaga Prison tomorrow.”

Former Mukurweini MP Kabando Wa Kabando noted: “Chief Whip assembles a Whip in a hamlet to Whip a villager. He is my good friend, but I think he’s Tangatangaring and wimping too much with a Whip and should urgently be DeWhipped and Whipped and ‘CANED’ into senses to whimper.”

Nairobi-based lawyer Donald Kipkorir reacted: “In between engaging in public heist, TangaTanga MPs revel in breaking the law; if not flouting traffic rules, it’s beating up IEBC officials, abusing State Officers and of late beating up fellow “hustlers” as Ben Washiali has done …. Imagine what they will do if they get State House.”

Iguess kenya is not a civilized world.In acivilized world there is no way apublic offical would hold office after clobbering another person in public like that.
Even if the incident happened 40 years ago.Could someone enlighten the neanderthol that its the act of kicking,and punching ahuman being that is against the law,much less offensive.
Iwould think that the national assembly whip would know better on how the law should be,followed,and not broken He should not go unpunished.

Third World Country; Kenya
This guy is an Mp! treating a voter like garbage no regard for human dignity!
At least in the Western World, citizens have a right to own guns! That's why everyone is cautious; don't know who has what! Do shit like this fat ass Mpig, pretty damn sure what's next!

Cowardly Luhya men, hitting a defenseless man from behind and still throwing punches like a "girl" (no pun intended girls). The guy being kicked would knock that SOB mpig and all the faeces and tapeworms lined up in his stomach in a minute. Useless men