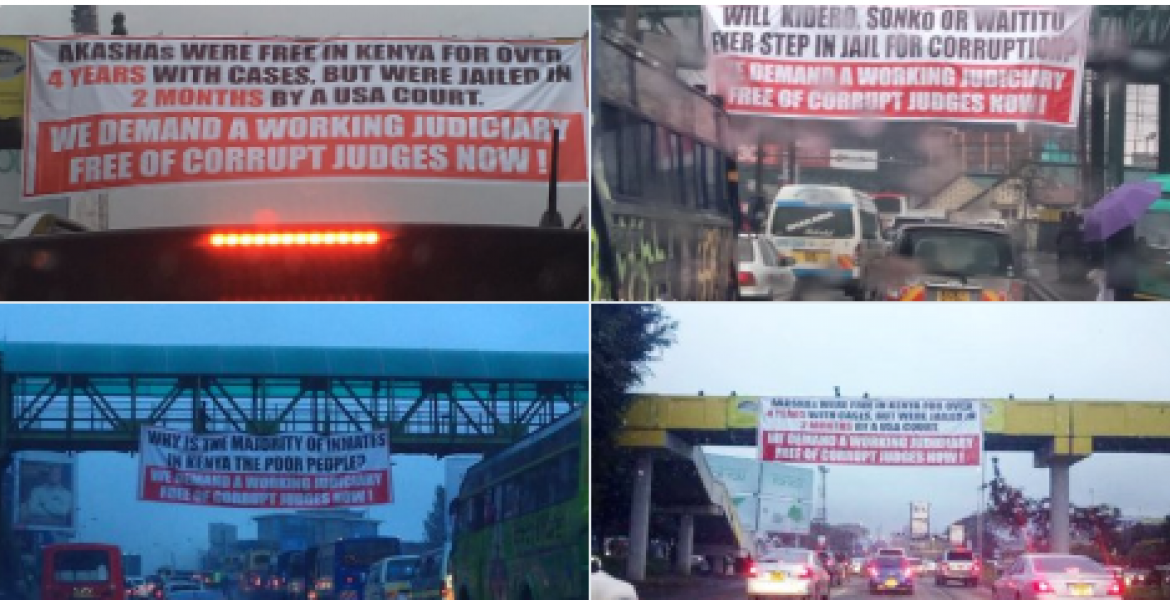 The banners, written in bold letters, contained different messages castigating the Kenyan judiciary over some of its rulings perceived to be favoring the rich.

The posters were mounted hours after Embakasi East MP Babu Owino was released on a KSh10 million cash bail in a case in which he is accused of shooting Felix Orinda, alias DJ Evolve.

Kenyans online were critical of the magistrate’s decision to direct Owino to pay the bail amount in four installments of KSh2.5 million over the next four months.

“Akashas were free in Kenya for over four years but were jailed in two months by a USA court. We demand a working judiciary free of corrupt judges now,” a banner erected at Nyayo Stadium roundabout read.

Another banner mounted on a footbridge in Pangani stated: “Why is the majority of inmates in Kenya the poor?”

A banner along Ladhies Road, asked: “Will Kidero, Sonko or Waititu ever step in jail for corruption?”

Commenting about the sentencing of Akasha brothers in the US two weeks ago, President Kenyatta said: “I think it is a shame on our country that we prosecuted a case against drug traffickers in our country and we couldn’t get a conviction and, within a year of them being arraigned in the United States, they have been jailed for not less than 25 years. That is something that our judiciary should come to terms with.”

Ibrahim Akasha was sentenced to 23 years on January 10th, 2020 while his elder brother Baktash was jailed for 25 years in August 2019. The two pleaded guilty to drug trafficking and bribery charges before a New York court in 2018.

Your excellency president kenyatta please send all those charged with corruption charges to the United states for real trial!!

If I were one of these in the judiciary system, I would resign in shame. Yes I understand about separation of power among the executive, legislative,and judiciary bodies,but Iam not sure if the president is all that powerless to let the judiciary be so incompetent and corrupt.How about using some executive powers to put some of these crooks in jail...
Obviously as corrupt as the judiciary is,it impossible for it to police itself,or be impartial when one of its own breaches the law.
If supposedly the USA used the same evidence to convict the Akasha drug dealers,and Kenyan judiciary had the same evidence,and could not get aconviction.What does that say? Should We not demand that they all step down,and new judges assigned? Right now there are numerous backlog of cases,one wonders if they are working,or just collecting paychecks,and clamoring for recognition,and new Merc.Benzes.

Unfortunately the rules for removal require action through the JSC. That is akin to the fox guarding the henhouse. Barring action by the people or executive action, Mwita, Mwilu, Ndungu, Ojwang, Marete, Muya(a known drunk) Waithaka, and others will continue serving under questionable circumstances. Almost a year ago 4 judges were accused of improper conduct. The cases, as usual went nowhere. The JSC and The tribunal are composed mostly of judges, ex judges and wanna be judges. Appeals are of course to the Supreme court where your friends and colleagues reign supreme. In sum, this is rigged.

Kenya should hand back judiciary to britain or US. Problem solved.

Am so glad there is a section of Kenyan wananchi who cares about the state of the Judiciary system we have here. Kenyan judges and the whole system need to be gutted. Fire everyone and start all over. The judges are all corrupt and taking billions in bribes. Politicians are killing and maiming at will. They know very well that the system will do nothing other that a slap on their corrupt behinds. They steal billions from public coffers, they end up spending a few days in jail. The case is continued for ever and ever. The witness dies or disappears. The judges are bought off all the time. Who cares for the poor folks and the victims. It is time to stand up.

The supposed independent judiciary needs a new name the corrupt judiciary.It is time for the executive to flex its muscle .Maranga and his ilk are sleeping on the job .What is Babu Owino doing out of prison, Will the likes of Sonko and governor Obado ever serve time for their crimes, others like Anne Waiguru are busy preaching BBI having never even been tried for their crimes

Kenyans are pretenders. Getting all shocked and enraged when the rich get away with murder or attempted murder but behind the scenes, hapo kwa local pub dining and sloshing and voting for these same muthafuckers. Yule amewahi votia hawa wauwaji na majambazi wacha pia naye aface the outcome of their reckless actions siku moja. So sad

Kenyans are getting tired of corruption, unfair justice and over the board levels of inequality!

Indeed, “We the people” have just started fighting back for what is rightfully ours. Our good country and our freedom!

The fight will not stop until we reclaim our country back!!