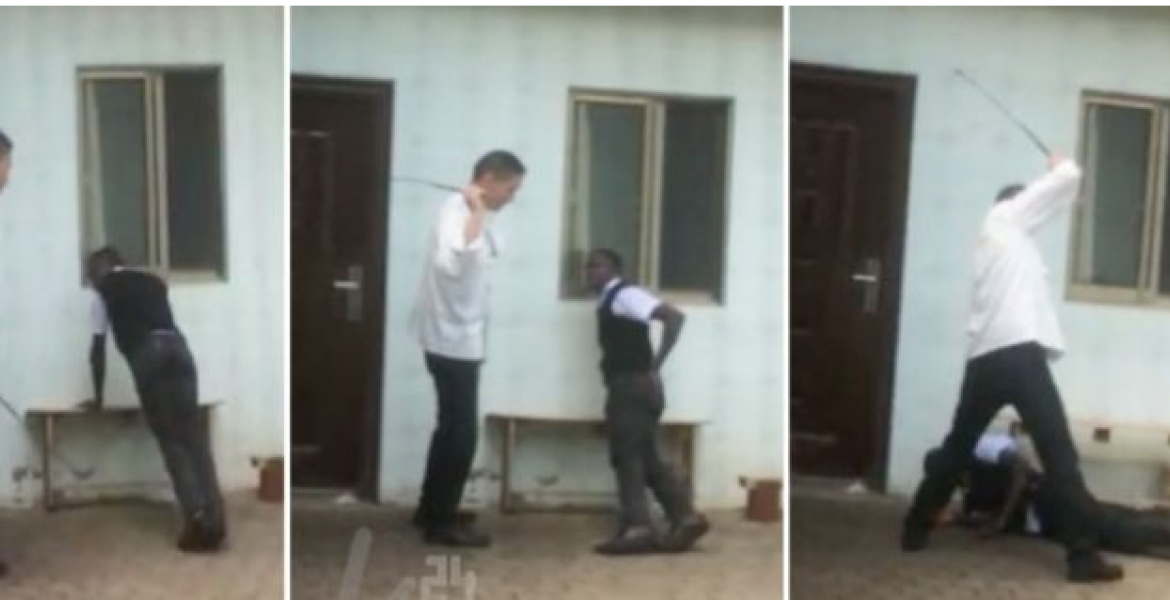 In the video that was first shared by K24 Digital on Saturday, the Chinese man believed to be the head chef at Chez Wou Restaurant in Kileleshwa, Nairobi is seen punishing the seemingly youthful waiter who is alleged to have arrived late for work.

The waiter is heard pleading with the Chinese man to cane him in quick succession to possibly minimize pain while the foreigner asks him to state which part of his body he prefers to be whipped. He then goes ahead to give the waiter a number of strokes of the cane on his back, and the worker is seen writhing in pain.

“He walks around carrying the whip. He uses it solely in disciplining us. When he goes home, he locks it in the store,” a worker at the restaurant told K24 Digital.

For real: The employee should Fire himself to Freedom; Never to go back to this "Dead Fish Eyes".

What happened to our self esteem, self pride, self determination. Why are we not principled, that we will let others take advantage of us. Why can't the employees gang up and teach this fool a lesson. Individualism, me myself and I culture has taken over. Can't Kenyans fight for themselves? Nikama watu wamekatwa mikono.I mean grab the freaking cane and whack him hard in the head till he sees the stars or are people waiting for Uhuru to do this for them? Don't they have balls left? Watu waache upuzi na unjinga.

And the africans accept that kind of punishment?It is bad enough for the boss to use this form of punishment for any work infringement.
There are many valid reasons why an employee,or even the employer could be late for work...
The best punishment in this case is not to pay him for the time not worked...
I tell you this chinois guy is lucky. One of these days he will trying to cane a 6'3" 250 lbs black stallion, who does not give a damn about getting fired.You can imagine re-arrangement of the chinese's face after 3 well timed upper cuts,and a left -right hook for good measure...

@Maxilley, rearrangement would be a wise idea and once through with him he would be bruised well enough (read "melanined") to resemble Njoroge or Onyango.

@ JamboKenya, hahaha,I take it as a compliment. Maths was my favorite suject because one does not have to read alot,as opposed to logic,and reason.
Actually, I have been told afew times to write abook. Well, I guess when I retire this might just be what I would do ,instead of chasing ndogo ndogo.
Stay tuned.

It is all Moi's fault!

Uhuru was called a monkey by a chinese right here in Nairobi not very long ago. We did not hear a peep from him either.

hawa watu wa hii handshake ya MAFI. WHY LET YOUR CITIZENS BE HUMILIATED LIKE THIS???!!!!

It's official, the Chinese are our new colonial masters and grown men are being whipped like it's pre-independence. Meanwhile, the other men are out here singing wamlembez, getting stupid drunk & flexing their beer & hard liquor muscles bragging how this can never happen to them.
The rest of us are waiting for God to help us.
God helps those who help themselves.

Get up stand up,stand up for your rights

Jameni! how can you allow this Chinese to whip you? Show him wewe ni ndume. Kazi ikae but I cannot allow anybody to whip me without fighting back.

Deport him right away. Then he can go back to China and perish.

This Chinese hits me, and that is the end of one of us. I think there should be a law passed where men videotaped being beaten by Chinese without defending themselves go to jail. Aibu!!!!

We are busy singing bbi,bbi yet we are still colonized. Si SGR, si kwa hoteli we are still slaves. We are citizens by birth and we are treated like we are garbage. When the SGR incident was reported to the authorities. kenya goverment denied any existence of abuse coz someones palm got greased. Uhuru was called a monkey what did our sweet government do, they deported the character. tuko pamoja wajinga sisi. Bring that bbi we pass it and let it screw ourselves as usual.

I'm going there to apply for a job on one purpose only; be late for work on the first day. No way, not on my body and in my country.

Koffi Olomide,the congolese crooner was given less than 24 hour to leave the country, after he was caught on video kicking one of his dancers-acongolese woman.Here caught on video is a chinese dwalf canning a Kenyan worker.Shouldnt we give him 6hour to pack and leave?And if he is a citizen, which idoubt,revisit his application forms.

Where is the government? This guy should be in jail and after in the airline for deportation. Kenya is independent and our people should enjoy the fruit of the independence.

Ooh men!!!You don't need rocket science to defend yourself and preserve your diginity...Did this Kenyan really allow a chinese to whip him for getting late to work,or is it a joke..God forbid it wasn't me.So very sad for desperate Kenyans.This is so off the hook for these chinese people...seriously.This is where Kenyans need to take the so called Kenyan LAW into their own hands..It's appalling to see this Kenyans.Get up,Man up,give what is necessary to these dog eaters

Rosa Parks (1913—2005) helped initiate the civil rights movement in the United States when she refused to give up her seat to a white man on a Montgomery, Alabama bus in 1955.

I am sorry Mr president I know you are mourning His excellency president Arap Moi but please stop allowing these Chinese nationals from mistreating kenyan nationals!! This is nothing but slavery!! Why? How? Where are the elected leaders? Where is the police commander? What is wrong with judicially? We going to be exploited, harrassed, abused and spit on in our own motherland??? Please give me a passport and I'm denouncing my nationality!! I think it would be mu h better than seeing these humiliation happening to poor Kenyans in the hands of " New colonialists"!

We need to sent this idiot back to his coronavirus. Come on Kenyans. This is bullshit

I wonder what the employee's wife and kids think after they saw this video. Is this what daddy has to go thru' every day just to bring home that bread & butter? Really? Not worth it! NOT WORTH IT A BIT!

People are commenting on the guy "how come he could take that degrading punishment". The guy has no choice, jobs are hard to come by in Kenya!

True. Most people commenting seem very diconnected from what is going on in Kenya. Why would anyone take a swipe at the victim who's only desperately trying to survive.

US secretary of State Mike Pompeo today warned US state Governors of Chinese infiltration into US. Its getting ugly folks.

Job my ass .How much does a waiter make in Kenya and here you go blaming pickpockets in Nairobi.I would rather be stealing phones and running tricks in river road than serving dim sim and duck to foreigners.Corona virus was no accident these Chinese have become too much .Not only have they overstayed their welcome but does Kenya really need Chinese restaurants.The mpigs and fake Kenyans who eat in such places can eat elsewhere or hire personal cooks.This guy needs to be deported like yesterday.Corporal punishment is not allowed in schools how dare he practice it in the workplace.Put him down like a rabid dog.It happened to the Indians and they were just insulting Africans .Time this Chinese dude was made an example of

Show me where this hotel is and i will go for a revenge! Are we in a colonial era where people walikuwa wanapimiwa hewa kwa mkembe...He should be deported and let have those coronavirus!

I NEED TO KNOW THE CHARACTER BEHIND POSTING PEOPLE'S COMMENTS HERE ON MWAKILISHI...
IF YOU KNOW PLEASE REPLY ON HERE

In other places, that hotel would have been burnt down to the ground by now. Wakenya tulilogwa na nani. Is Kenya now a colony of China.