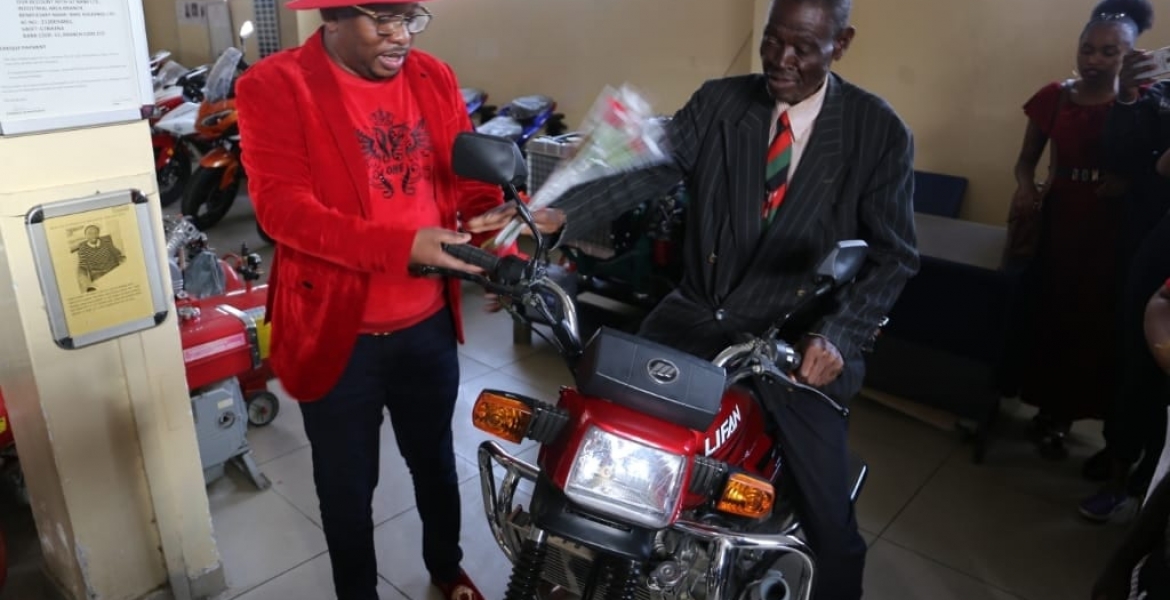 Nathan Ambuti, a 76-year-old Kenyan man who made headlines this week after he cycled 223Kms to attend the late former president Daniel Arap Moi’s burial in Kabarak has been gifted a brand new motorcycle and a posho mill.

Ambuti, a self-declared peace ambassador, rode a bicycle for four days from Butere, Kakamega County to Kabarak, Nakuru County to attend the burial of Moi, who he adored.

He said he opted to cycle since he did not have any money for a hotel room and he would sleep on verandahs before resuming his journey the next day.

On Valentine’s Day, Nairobi Governor Mike Sonko announced through his Facebook page that he had gifted the man a motorbike and a machine used to grind maize after his story touched him. Sonko said the motorcycle will ease the elderly man’s movement.

“Today my family donated a Posho Mill machine which he requested from me to start his own business in Butere, it’s a diesel-powered machine which can Mill with electricity and diesel. We have already fueled his machine and ready to Mill,” Sonko wrote.

I knew another "Githeriman" was in the Offing for Hand-outs. And here here he is for sure. Kenya hii?

why on earth do you have to advertise of for your good course. Oh I get now, its the limelight syndrome - thinking of what can I do to be at least in the front page

This could be why he was Denied the Podium at Moi funeral (for wanting to Capitalize on other People's grief).

Sonko hoping the good old times will come back.

Ithought all his bank accounts were frozen.How much did he stash in the mattress?
Anyway, say what you may about his politics and how he acquired his wealth. He shares.Others have acquired wealth same way,but cannt donate a cent to a starving street kid.

Unclothing Peter to clothe Paul does not create wealth. Only increases paupers and beggars.

What have you done for the nairobi constituents.