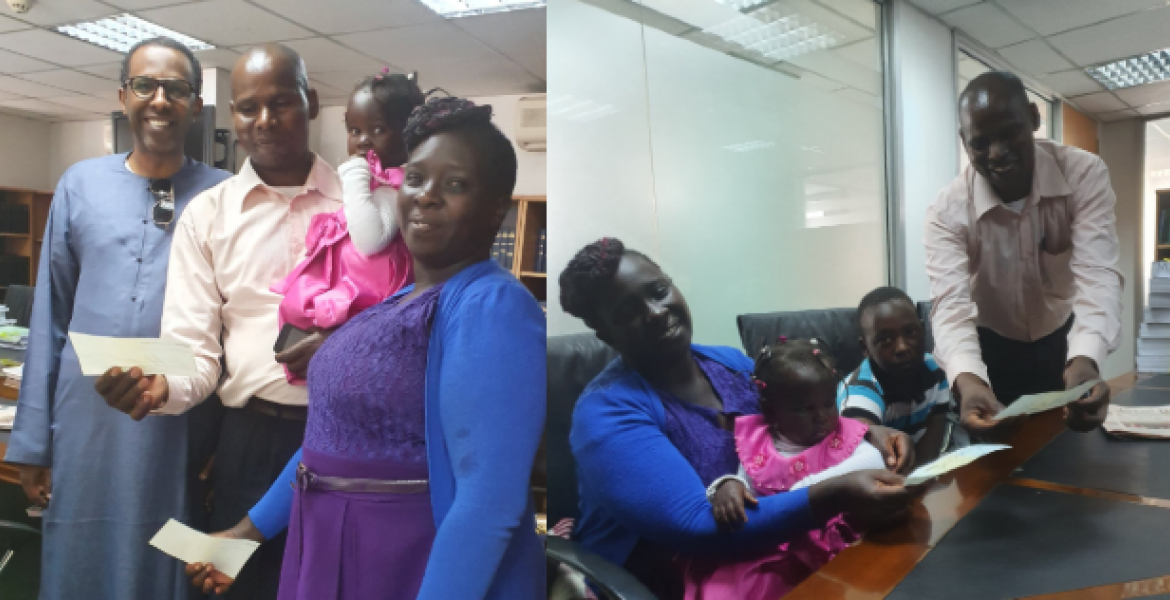 Nairobi-based lawyer Ahmednasir Abdullahi has fulfilled his promise to give Sh1 million to a Kenyan security guard who walks 15 kilometers to work.

Ahmednasir, a senior counsel, made the pledge after he met the man on the streets of Nairobi walking home from his work station on January 23rd, 2019.

Ahmednasir, in a series of tweets, said the story of the father of two touched him after he disclosed that he walks 15 kilometers to work daily and earns Sh12,000 monthly.

“Gave a lift to this hardworking Kenyan...he works as a security officer in Lavington and stays near Lenana school...he walks 15 kilometers a day...to work and from work...”

“He told me many things like his affection for Malcolm X.. the havoc the Sexual Offences Act has caused in the slums. "Justice Njoki made very bad law," he said...and then his family. He has two kids and he is very proud that "I buy every book the school asks my kids to get," he said.

“He earns Kshs 12K a month...I shed tears when he told me about his 2 kids. When he alighted I gave him some money and he said: "my kids will have SOUP tonight"...I also gave him my phone number.”

“I know we have millions like him but who said Allah can't help his servant through another one?” wrote Ahmednasir.

On Friday, Ahmednasir announced through Twitter that he had given the man and his family Sh1 million to enable him to start a small business. The man, Alfayo Omwenga visited the lawyer’s office with his wife and child, where they were presented with a cheque of Sh1 million.

“Alfayo Omwenga...and his family visited my Chambers as promised...gave them Kshs 1 million from my FRIENDS and CLIENTS...hope/pray it will help this beautiful family...INSHAALLAH,” tweeted Ahmednasir.

The Grand Mullah,God bless you

Didn't know there are Kenyans of GOOD WILL until now.Thank you Bw Wakiri.May God Bless the work of your hands.

What we need is to act.....thank you Ahmednasir.

Train him how to use his money wisely so that he does not drink all of it like Githeri-man.

There is a saying in my village.. Give a man a fish and he'll be back asking "wapi unga?"

Good job bwana wakiri but u could have given the jamaa pesa without involving cameras n all hullabaloos.Give n walk away n let the guy who gave cash b the one to come out one day to talk about yr generosity.U have put that guy on the risk too from other guys coz wananjua ako na pesa.Tenda mema nenda zako.Personally when i give i don't let other pple know.Wacha wao wenyewe waongee mazuri umefanya.

I hope our politicians will borrow a leaf from you to Learn to keep their words to their constituents.