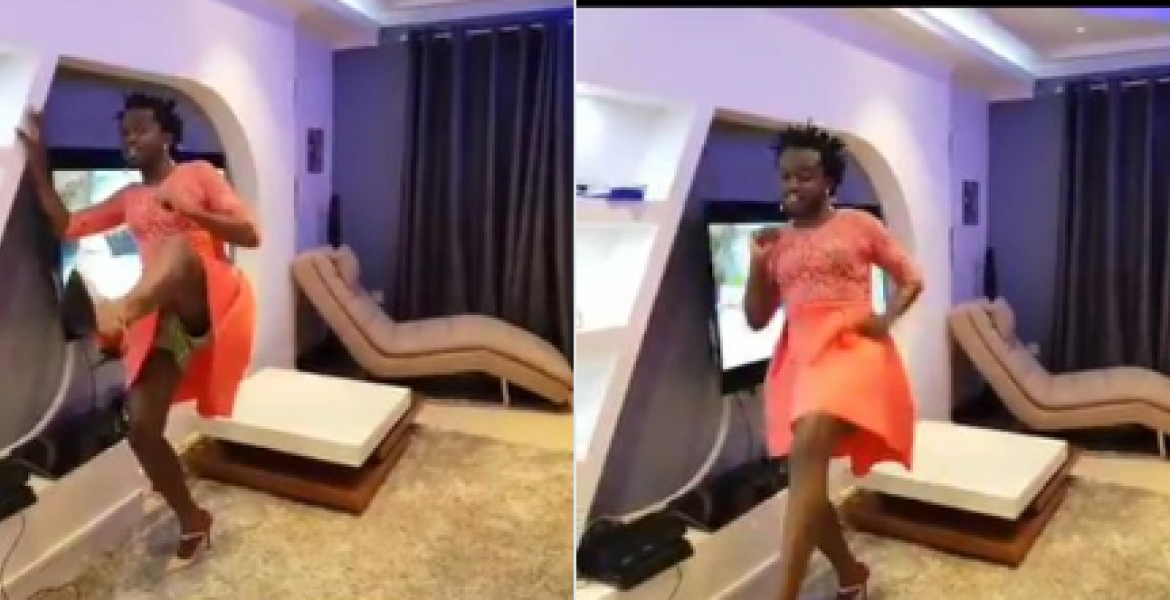 Kenyan gospel singer, Bahati is under fire from Kenyans on Twitter for wearing a dress belonging to his wife, Diana Marua.

Bahati, through Instagram on Saturday, shared a video of himself dancing to Akothee’s song while wearing his wife’s orange dress, earrings and high heel shoes.

“CALL POLIS 😂😂😂 I Was Forced to Put on this Dress Jus for Tik Tok - But Singetoa without Imitating #Akothee Msi Mtag Sitaki Shida 😂😂😂,” he captioned the video that has so far attracted over 27,000 likes and more than 4,000 comments.

Online users criticized Bahati, saying his action was ‘inappropriate’. Below are some reactions sourced from Twitter.

@bojakversion wrote: “Bahati humbled himself, got a "sympathy" support; reached on top of the ladder and automatically switched to default settings. Indeed, you can remove an individual from Ghetto but the reverse is impossible.”

@agot_bonface posed: “Bahati just put on an oversized Diana panty and her dress. This kid needs help. How is he even a husband? Which woman allows her husband to put on her full dress ati 'call the police haters?”

@umurobudha said: “Being famous doesn't mean u start misbehaving and lose respect. History will judge u harsh if you're not careful. This is not Bahati I looked up-to.”

@Gikony0o noted: “Someone tell Bahati it’s enough of trying to show us how much he loves Diana and that he is standing with her in times of bullying😂😂😂 SMH, dude is losing it 😂🚮.”

@MuriukiVice stated: “I think Bahati now need to grow up as King kaka said...This nigga anafanya utoto in the name of chasing clout😣🚮.”

@gescokenya wrote: “I have always said that bahati aliolewa na diana but kenyans do you believe anything??? Now look at this lady @BahatiKenya and tell me if his head is sane. Women will continue to disrespect men, no offense to the female gender. As men we have to respect ourselves to be respected.”

If he has been wearing an Earings, and now a Dress: He is about to Come Out. He is about to tell the World that he is Gay; a Descendant of SODOM (and Gomorrah).

He's moisture radar is high! He's wife should be aware!

If he comes out, then he should join LGBT movement and maybe become its patron.

Then the Church he goes to and Woman or women he sleeps or has slept with will become POTS of DEATH.

Where is the African masculinity?

Gay. The underwear is about to fall off. His keeping up with Kardashian show has turned him to be Caitlyn Jenner.