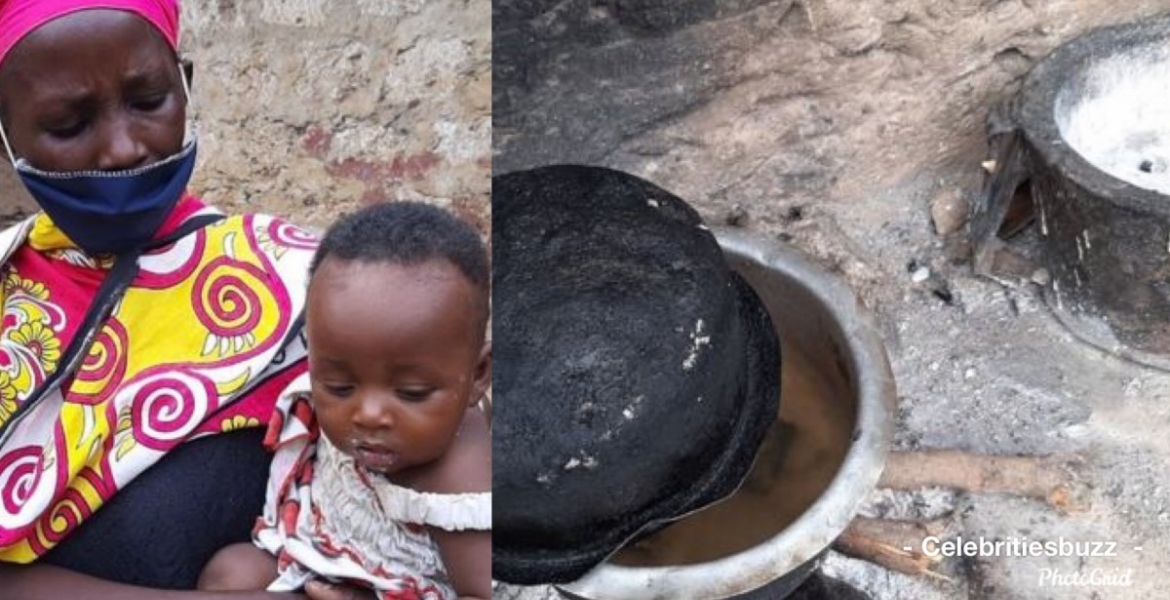 A 36-year-old Kenyan woman from Mombasa who hit the headlines last week after she was found boiling stones for her starving children has received overwhelming support from well-wishers.

Peninah Bahati Kitsao, a mother of 8 children, is having her life completely transformed with sympathizers blessing her with all manner of goodies.

So huge is the support she has received that Mombasa Woman Representative Asha Mohamed deployed two police officers to guard her day and night as her security was no longer guaranteed.

Peninah is set to be relocated to a better house and her children taken to school thanks to well-wishers.

Over the weekend, Ms. Asha and other leaders from Mombasa visited Peninah at her house in Kisauni with food donations household goods and cash. This is why her security has been deemed paramount.

Woman Rep. Asha promised to have Peninah undergo training on how to manage her newfound wealth and fame, adding that she has received enough food to last her family for a year.

“We have assessed her situation and realized she needs a lot of change. First, we want to counsel her so that she can live with her newfound fame and money,” she said.

“We have to take her from this environment to another environment where she is not known because of her security.”

Her children will also be counseled and taken back to school courtesy of the bursary kitty from the Woman Representative’s office.

“Her children, most of whom dropped out of school, have been scavenging dumpsites and doing odd jobs trying to get food on the table,” Asha said.

In addition, her current two-room house will be refurbished and rented out so she can earn from it per month.

Peninah’s eldest son is nearly 20 years old while the youngest child is only four months old.

“I didn’t believe that Kenyans can be so loving. I have been receiving phone calls from all over the country asking how they might be of help,” said Peninah.

Her husband Kaingu Charo was killed by thugs in Mariakani in June last year, leaving her to fend for children on her own.

I wish to send my contribution too

meanwhile our useless leaders seat down and drink 4 million shilling tea while the other ones send flowers to london. As if thats not enough they decide to displace over 4 thousands citizens in kariobangi in the middle of pandemic. May God see this rot and inflict torture to the thieves and greedy MPIGS. Your days are coming even Mugabe at one point thought he was untouchable. He left his stolen loot behind while he died painfully in exile. Treat Citizens with sympathy and respect for once

First, it was Githeriman getting help. Then Bikeman to Moi's funeral. And now Stonelady. Who next?😰

@Guest1 you gone be next you punk beech.

do something u will b next

You will be next! I believe you have been getting help but you are blind to that support! The welfare office is right inside your little mud-hut! Jut keep on visiting and asking for more help.

lots of similar cases, complete change of system needed in Kenya, small changes wont do it

Rep. Asha Mohammed, where were you? I bet the last time you checked on your constituents was election day? This is just but a drop in the ocean....funny you address only what comes to the media....huh!
Which SCHOOL were her children taken to? I thought all schools are closed. Mama juchunge, these leaders might fly with half your mfuko.

Good job kenyans but let's not forget ur to have the children which you can b able to feed or school sip kuzaazaa ovyo ovyo.The more children u have n u cannot b able to give them good life u will b answerable to yr God.

Read first before uttering nonsense,she said her husband was killed were you the husband to know he wasn’t able to feed his kids nkt

In all these, we haven’t been told anything about babies daddy whereabouts. Surely 8 kids ijapo kuwa ni Baraka, hamna shaka ni wengi sana just in case he had abandoned her.

Thank you all who made contributions to this family's welfare. To the government, it is not the responsibility of well wishers to help needy citizens all the time, there are thousands of kenyans in similar fit. we will not continue to do your job while you are sleeping on your job.

Peninahs story is once again highlighting the failures within our system that are letting down the weak and helpless in our communities. The well wishers have been generous and kind enough but they are playing the role of gov't ( both county and national)
Leaders should hand their heads in shame when such stories are highlighted.
More importantly they should workout a plan on how to provide the basic necessities to people like Penina.

Peninahs story is once again highlighting the failures within our system that are letting down the weak and helpless in our communities. The well wishers have been generous and kind enough but they are playing the role of gov't ( both county and national)
Leaders should hand their heads in shame when such stories are highlighted.
More importantly they should workout a plan on how to provide the basic necessities to people like Penina.

The husband died in june last year but the youngest child is 4months....

He left her pregnant. They pekenjed in April and the baby was born in January.

She is down to 7 as one of her children died recently, so in less than a year two tragedies have struck her hard. That said, as men we have to do better. If you are broke, having more kids is a sure way to increase your suffering, it's simple economics. A man's got to know his limitations.