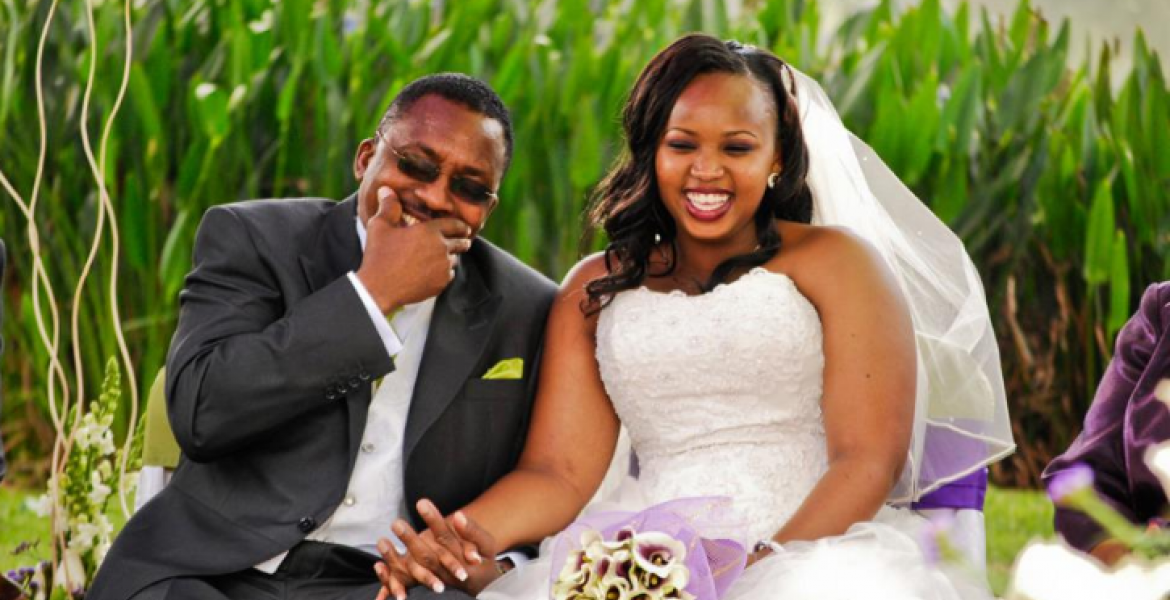 Controversial pastor James Ng’ang’a of Neno Evangelism Centre and his wife, Mercy Murugi have shared details of their marriage life.

The couple, who tied the knot in a lavish wedding ceremony held at Windsor Gold Club in Nairobi in 2012, talked about their union in a video uploaded recently on YouTube. Ng’ang’a married Mercy following the demise of his first wife.

In the video, Apostle Ng’ang’a revealed how his wife fled their matrimonial home on several occasions and how female members of his church pressured him to marry them.

He noted that his wife was unhappy due to the many romantic messages he was receiving on his phone from other women.

“There is a day I came and found out that she had packed all her clothes and ran away from home. My phone usually created more issues between us. I remember one day in Naivasha, a text message reading ‘Thank you for the good night we had yesterday’.”

“I gave her and asked her to read it as it was a false accusation. If she had seen it, later on, the situation would have escalated,” Ng’ang’a noted.

At some point, Ng’ang’a said, he was forced to remove all security codes from his phone and confront these women in presence of his wife.

“I was not a saint because I was married before meeting her. I expected her to come and fill the shoes of my late wife. Every time she ran away with my BMW, I followed her to their home with the police and repossessed it. However, I prayed over it and she came back and settled,” Ng’anga recalled.

On her part, Ng’ang’a’s wife said she first thought that marriage was a bed of roses but she was wrong.

“I have learned through experience. His phone was giving me a lot of headaches because I always wanted to know who was calling him but I stopped fussing. That is how I defeated Satan,” she stated.

Pastor Ng’ang’a explained that women in his church would go as far as bribing ushers to get front-row seats during the service in order to ‘tempt’ him into marrying them.

He claimed that 1,000 women in his church were seeking to marry him and one had even offered him Sh3 million for him to be her husband. This was before he married Mercy, a university graduate, and daughter to one of his congregants.

“There were thousands of women who wanted me to marry them. Others were politicians, while some were bishops. A woman even offered me Sh3 million to marry her. They tried duping me by posing the money as offerings.”

“Ushers and women in the church left after I married her as they decided to walk away. They even tried to fight her and even used witchcraft, while questioning why I married a younger wife. I think it would have been unwise to marry my age mate because at some point we would have aged and failed to take care of each other,” Ng’ang’a disclosed.

Yaani, women pay to get married. And how much do they pay for sex? Tafakari hayo.

Liar..ego-driven idiot... can't have a discussion with this type..oh poor educated little girl. Embarrassing the "wife" paka she can't hide it...pls shut up sometimes ...this girl is clever, she can make you shine.

'I think it would be unwise to marry my age because at some point we would both be Old'. That is one way of looking at it. Another way of looking at it is that she probably has more sexual drive than you can possibly satisfy at your age. She probably has a 'Mpango wa Kando', as a young Woman, while she lives with you because of the monetary support that you provide her with.