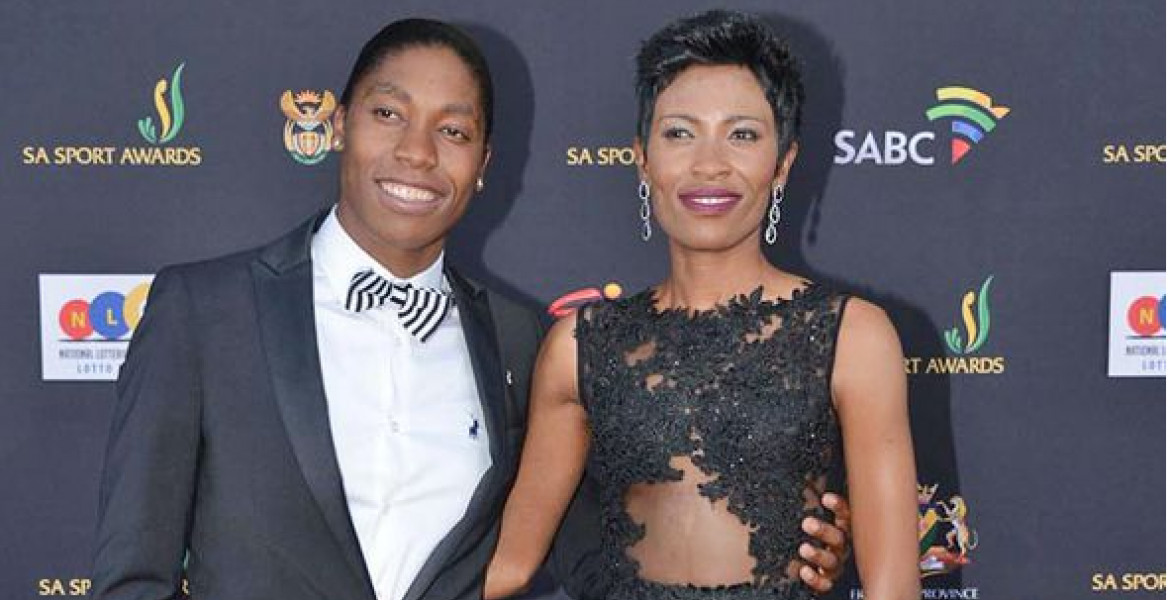 A source told South Africa’s Daily Sun that two welcomed a baby girl a few months ago but have kept it under the wraps.

Raseboya describes herself as ‘Mama Ora’ on Instagram, a hint that the girl is named Ora. The couple tied the knot in a colorful wedding ceremony in 2015.

29-year-old Semenya, a double Olympic champion, did not defend her title at the 2019 World Athletics Championships in Doha, Qatar after a Swiss court ruled that she must take testosterone-reducing medicine to be allowed to compete with other women.

Aki I don't know why it pains me about this guy who pretends he's a she! A she can't mount on a she & expect the other to conceive! Since he's made a she conceive, his nunu should be stitched up or sealed for good & he should be stopped from participating in ladies events! Hope am clear about that,sawa? Sh*t!

Pain you? You are intimidated & quite insecure ha! Who appointed you as a moral police or gender specialist! You speak as though you really know her inside out! What’s wrong with people like you? Pili pili husiohila, je, lakuashia nini? Why is her life becoming your personal biz mbaka it, ‘pains’ you as you said? Get a life dude! The world is evolving & so are people’s choices & cultures! Get used to it & lead your life.

He was stopped from competing with women until he takes testerone reducing pills.About impregnating someone..i doubt.

He has testicles which did not descend from the body like other men, but they are fully functional, so he is quite capable of siring a child with a woman.

Its a stupid thing to say. She comes from a poor village. We dont do such rubbish of changing ur gender....its not a black thing especially south africa

And the egg was fertilized by????? Amazing.

Don’t be naive! With new medical technology there’s so many ways to do things! You know the possible answerA to your question.

@ Sokora,do you know that SCIENCE can "impregnate",an egg using skin cells to fertilize an egg?.The bad new,or good depending on where you stand is that,this technology works only to produce females.Could Semenya have been a beneficiary of this modern miracle?
Obviously for ethical reasons,and the tecnology being in its infancy stage alot is till to be know before it goes to the "assembly line" production.My 2 cents Viva la SCIENCE.

Did Caster Semenya produce the seed? This man should not be allowed to run as a woman. He should be competing with Rudisha.

Congratulations Castor. We are all so proud of you!

I will bet anything that Semenya is the biological father of the Baby, and for those who doubt, DNA testing leaves no room for doubts. Reason? The main beef between Semenya and IAAF was that he has testicles, which produce the hormone testosterone, which gives him physical advantage over Women. But testicles also produce sperms, which are used to... Anyway you can guess where I am going with this.

And all these years we were blaming the world bodies for not allowing him to compete in women races.

so are they considered lesbians? I am asking because i am really confused.

To each his/her own. Live and let live.

It is obvious to anyone with eyes that can see, that Caster Semenya is a male. He should have gotten the surgery to make himself fully male, and then he can compete as a man. Testicles probably never dropped, and are internal, but there is surgery to fix this. He is obviously happier being a male.