After Growing Up in Poverty, Kenyan Man Gifts Mum New House on Her 55th Birthday 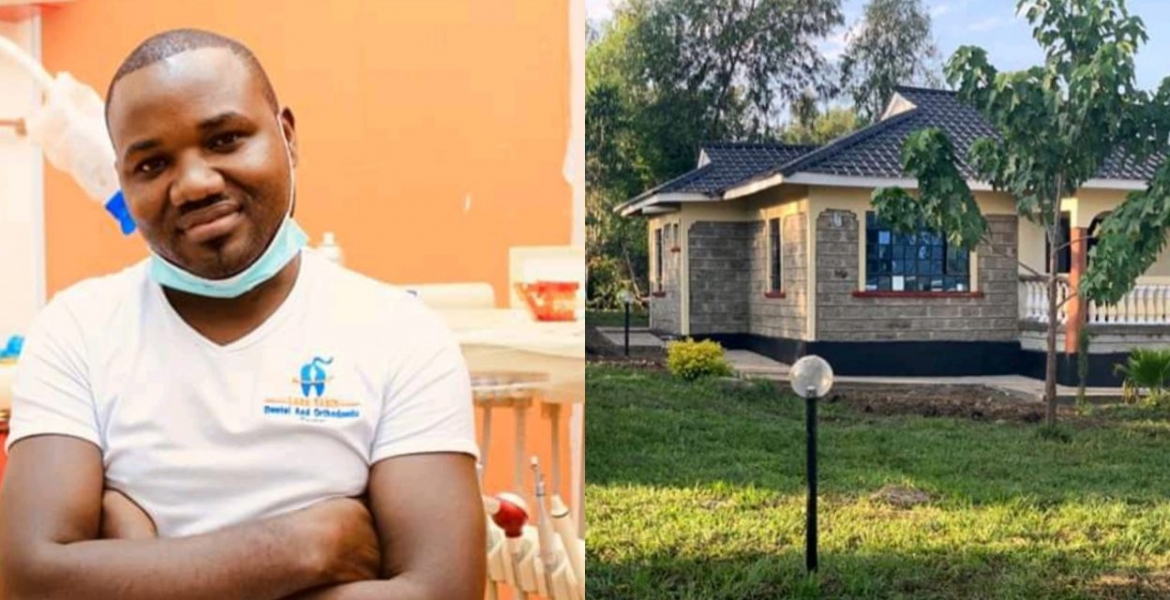 A young Kenyan dentist who grew up in poverty in Siaya County has wowed online users after he gifted his mother a new bungalow on her 55th birthday.

Ken Carson recently shared on Facebook photos of the newly-built house with the caption indicating that it was a gift for his mum who just turned 55.

“To you my Mama, I gift you this during your 55th birthday, thank you for all your sacrifices,” Carson noted. 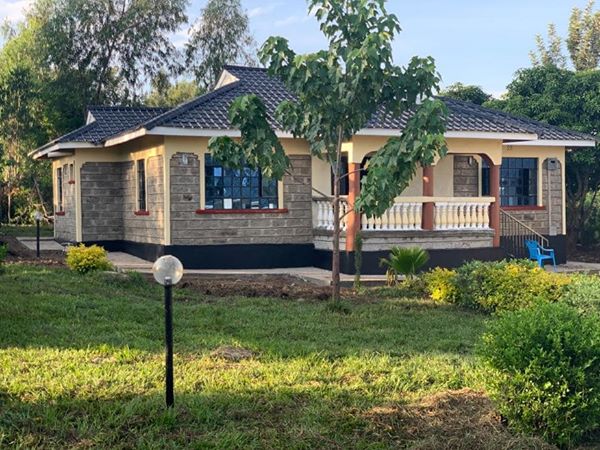 Carson shared his inspiring life experience and how his parents struggled to raise money for his education.

After completing primary school, his parents had two options—take him to a carpentry school or sell their belongings to raise fees for his secondary education. His father wanted him to join carpentry school but his mother insisted that he must proceed to high school.

“Dad (may his soul RIP) wanted me to join carpentry instead. Mum insisted I had to join high school even if it means selling our homestead and becoming homeless. Mum won,” he said.

The family sold their house and used the proceeds to pay Carson’s Form One term one fees. Unable to raise fees for the subsequent terms, Carson’s dad was forced to supply farm produce to the school as a way of settling the arrears.

To raise some school pocket money, Carson would leave their rented home at Kanyanduru in Karateng’ village at 3 am to weed people’s farms.

After posting exemplary results in Form One, Carson earned a full boarding scholarship from the school and went ahead to produce the institution’s first-ever A plain in his KCSE exam three years later.

He later joined university to study dentistry but at one time in his second year of studies, he almost dropped out to assist his mother, who was struggling to raise money for basic needs.

But a friend convinced him not to drop out as there was no guarantee that this would improve the situation. His mother also encouraged him and reassured him that things would improve in the future.

Carson went on to graduate after finishing his university studies and today, he runs Lake Basin Orthodontic Centre in Nairobi with a branch in Nyali, Mombasa. 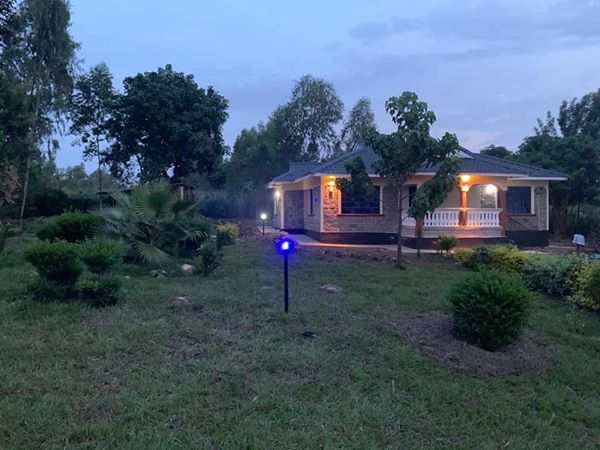 Good job Mr. Carson. But let me say this this for your and everybody else's Information:

This house was PAYBACK (not a Gift) to your Mom; for she Sacrificed so much making sure you sent to High school and above).

Case in Point: Your mom Earned this house from you for her Hard work; and so deserved it. Gifts are given for Free; and undeserving. Yours to your Mom was for Sweat; her Sweat. She deserved it. Congratulations bro!!!

Not really. This is where we Africans get it wrong. And fail to teach our kids. If you decide to bring a life into this world, you have a responsibility to raise that life. Developed nations figured this out - hence the child support and discipline they have. Poor people in the west are terrified of having kids. Therefore, this house is a GIFT. His parents had an obligation to do right by him. And they did their job. They could have been deadbeats, that was an option. We call that bad parenting. Sex comes with responsibilities. Thank you.

I am in total agreement with you Seneca. This whole idea of repaying parents is so ludicrous and doesn't make sense. The parents made the choice to have you, not the other way round. It's their obligation to provide, counsel and protect until you are an adult. Sadly, many parents guilt trip their kids into buying them even lavish gifts. That said, I have helped my parents but NEVER out of obligation or feeling guilty.

I totally agree with you. Parents raise their kids to be successful and be able to support themselves and the kids they will bring to this world. If the kids turn out well, like this gentleman, they will of course remember where they came from and uplift the welfare of their parents not out of obligation but for the love they have for them.

If your mom read your comment, she would wish she never conceived you leave alone birthing you. Thank you.

Makasiriko haiko hapa, your parents have the obligations to take care of you as they decided to bring into this world Carsons mom did a very good job at taking care of him and because of that Carson gifted her a house. Hakuna cha payback, payback will be if your mum is a bank and she loaned taking care of you. So wacha kutusi watu, that is immature of you, learn to unlearn the things that you know.

I totally agree with you, as parents it’s our responsibility to take care if out children. He did not apply to come in this world, it was the parents decision hence their responsibility to educate him. The house was a gift period!! Not every child will do a thing like that. Job well done young man may you be blessed always.

I disagree with you. This is truly a good gift to your parents. You can never repay your parents for all they have done for you but you can gift them as the Lords leads you. Good job Mr. Carson.

@GUEST1, I disagree. It is a gift. It is a way of saying thank you mom. You cannot be able to repay your parents. If you have money you can upgrade your parents house. In our culture we take care of our parents. Most American throw their elderly parents to nursing homes.

No they don't. Most nursing homes residents are of advanced age with a variety of medical conditions and are best cared for at nursing homes instead of being neglected at either their own home or the kids'. Care is paid for either privately or by the government and the kids can visit whenever they want.

He will inherit one day

That's why I said it was Payback; not Gift.

Wtf, can't you guys let someone be happy 😂😂😂. Positive thinking muhimu. @guest1 it is a gift.

I disagree with Guest1. Am a parent and we have obligations to do all that is within our capability to provide basic necessities including education to our kids without expecting pay back. How many parents does this, their kids get best education and top paying jobs but they don't look back at their parents? They spend their money in lavish life style totally forgetting their parents. I salute you Carson for looking back and giving your Mom a precious GIFT. You DID NOT have obligation to do it but you chose to. Continue tapping your blessings!!

Thank you @Liberal Me. Our kids do not ask us to bring them on earth; we owe them a good upbringing. If they thank us, for a good job, it is a gift. Reminds me of one mother who was very demanding of her kids because “I gave birth to them” as if she was doing them a favor. To be crude, she was the one enjoying the sex! Hehehehe

@Seneca, I see your point. There are some parents who are so demanding that I need this and that especially when their children are in majuu. They do not know that watu majuu get problems. If they do not get what they are asking they start bad mouthing you. Some people do not pick their calls because all they do is ask for money and may be their children are struggling to make ends meet.

@guest1 it's a gift. I'm more stuck on how a person from Siaya gets Carson as a last name. Is that self loathing, anglophilia, an inferiority complex or a combination of all three?

No inferiority here. I would rather Ken Carson (than Ken Wanjiru or Ken Mwende like some Deadbeat and Brainwashed boys do).

So why not a name like that venerates Luos who distinguished themselves? There are plenty to pick from. Would you have a problem with Ken Tom Mboya?

I wholly understand where Guest1 is coming from and from an African perspective it is payback time. However, I also understand those stating it is a gift. The dude could have turned wayward and not remember his parent, lakini he clearly is a grounded person to remember his past, mother and that without her efforts, he probably would not be where he is. Kuddos.

@seneca mkenya halisi agrees with yooo.Am one of those parents who keep saying don't have kids which u cannot raise.If u have one which ur getting difficulty raising block yr stuff don't have a 2rd one n if u do.Blame yourself not the gavament.I hate folks who yap ati God want us to fill the world n many children r blessings from God???Mmmmh sometimes i disagree coz why do we have chokoras or singles women struggling raising many kids??Yes u can make a mistake with 1kid but 2/3/4 hio i disagree.So seneca said it very well it is yr responsible as a parent to educate/feed what u have brot into this world?

@Mkenya Halisi
I think that you should have a word with TUKO TV and their knack of parading people from the slums who have been Locked out by the landlord. One lady had 7 children. No father in the picture. The landlord was fed up and kicked her out...wah! The way Kenyans beseeched God to strike the Landlord. Yet the landlord is a businessman, not charity United. So I asked...a woman in Kibera, 7 kids all below 10...now the rest of us are being guilted into donating!m? I was told to find another forum. Family planning is free in Kenya. Pale Huduma center.

I think it's the God will provide mentality that is so widespread. Unfortunately, when people take pity on the irresponsible adults, this is taken as evidence of God providing. My mom is a landlady and this is her main income. She can't eat gratitude and she damn sure can't take it to the bank. I give money to her not as payback but because I am grateful and I want her remaining years to be as comfortable as I can help make them.
https://m.youtube.com/watch?v=b9ilRCG9yjk

I am very much in agreement. When you bring kids into this world, it's your responsibility to raise them to be responsible adults. This tendency of people to make it other's responsibility needs to stop. That said, there are people who through no fault of their own face misfortunes and need to be helped. Hawa wa kuzaa ovio ovio, need to understand that the world owes them nothing.

Great job. Great gift for mommy.
Most of us have done this and many more for our parents already but we are silent.Silently counting our blessings one by one.

Whatever the reason, that is an absolutely beautiful house! I am sure momma is walking on air! bless her heart!