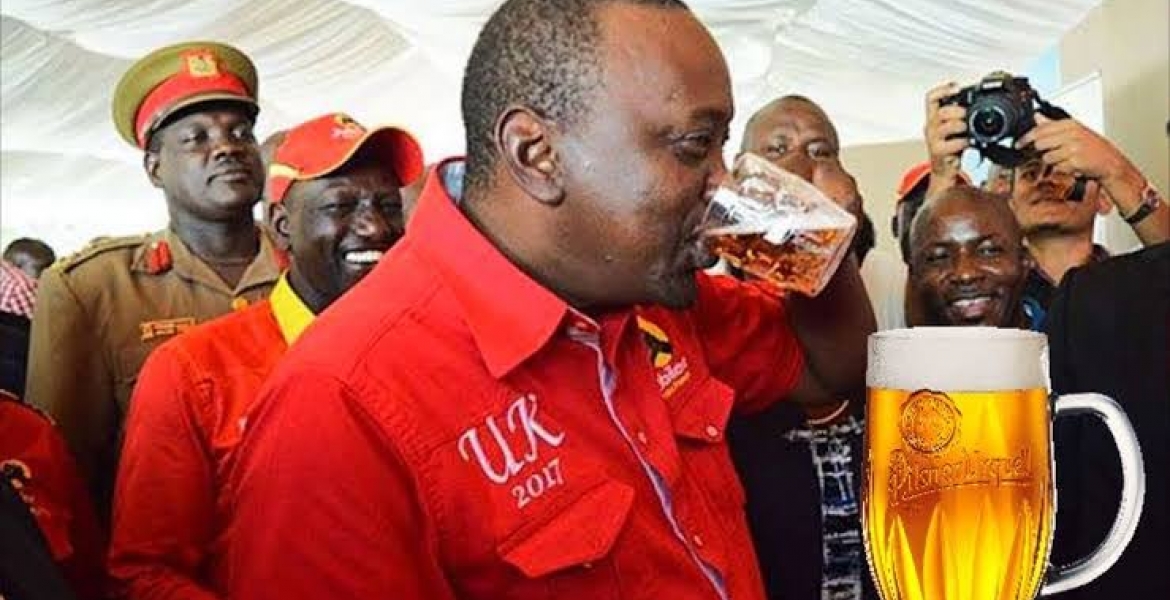 President Kenyatta was on Thursday asked to name which of two popular Kenyan-made beers he preferred.

During a webinar hosted by the Atlantic Council, the moderator Katrina Manson told President Kenyatta that members of the public wanted to know what beer he prefers between White Cap and Tusker.

Katrina posed: “I want to offer just one question from the members of the public that has come in; which is your favorite, Tusker or White Cap?”

A smiling Uhuru responded by saying, "Without a doubt Tusker goes first but don't tell Kenya Breweries that."

White Cap and Tusker Lager are both products of East African Breweries Limited (EABL) and are brewed in Ruaraka from locally-sourced barley.

White Cap Lager is a pale lager that depicts the snow-capped peak of Mount Kenya. It is noted to be favorite of former president Mwai Kibaki.

On the other hand, Tusker is a pale lager introduced in 1922 and is the most popular beer brand in Africa with over 700,000 hectolitres being sold in Kenya annually.

The limitless world of beer means a dizzying number of drink options are available at any given time. From classic lagers to bold IPAs to funky sour ales, each type of beer spawns more sub-categories than drinkers know what to do with. Knowing what certain styles of beer taste and look like can make narrowing down a favorite a lot easier.The major difference between types of beer comes down to the type of yeast used to ferment it. A beer can qualify as either a lager or an ale, depending on the fermenting process. Ales are created through top fermentation, a process in which yeast ferments at warmer temperatures and settles at the top of the beer. Yeast used to make lager tends to settle at the bottom of the beer, and the fermenting process is longer and takes place under cooler temperatures. The yeast in ales has a higher tolerance for alcohol than the yeast used in lagers. Beers start out as an ale or a lager, and their specific styles and flavors continue to evolve from there. It's good to know our President loves Kenyan beer. Actually the best Kenyan made beer is Simba made by a little known Naivasha based brewery called Savannah breweries Ltd. Beer is usually categorized on flavor profile and Savannah's Simba brand aroma stands out from all other beers made in Kenya. It appear the company's hop, malt and yeast strain is using is Belgium produced because the beer's taste is similar but better than Stella Artois. From my understanding the company was supposed to launch it's product line in May but everything was postponed due Covid_19. I am lucky to be among the first to taste it and I can assure fellow Kenyan beer drinkers good times is ahead

Very bad example to the youth of Kenya promoting alcoholism. KBL is British owned are we promoting Kenya or dancing to the colonial tune. He should be drinking changaa like wananchi.
Happy Junteenth

One look at him and I can tell he really takes it.

Uhuru should promote local breweries such as Savannah breweries and Keroche breweries. Kenya breweries is owned by British

I already had two sips with him! Stay away @Phyllis!