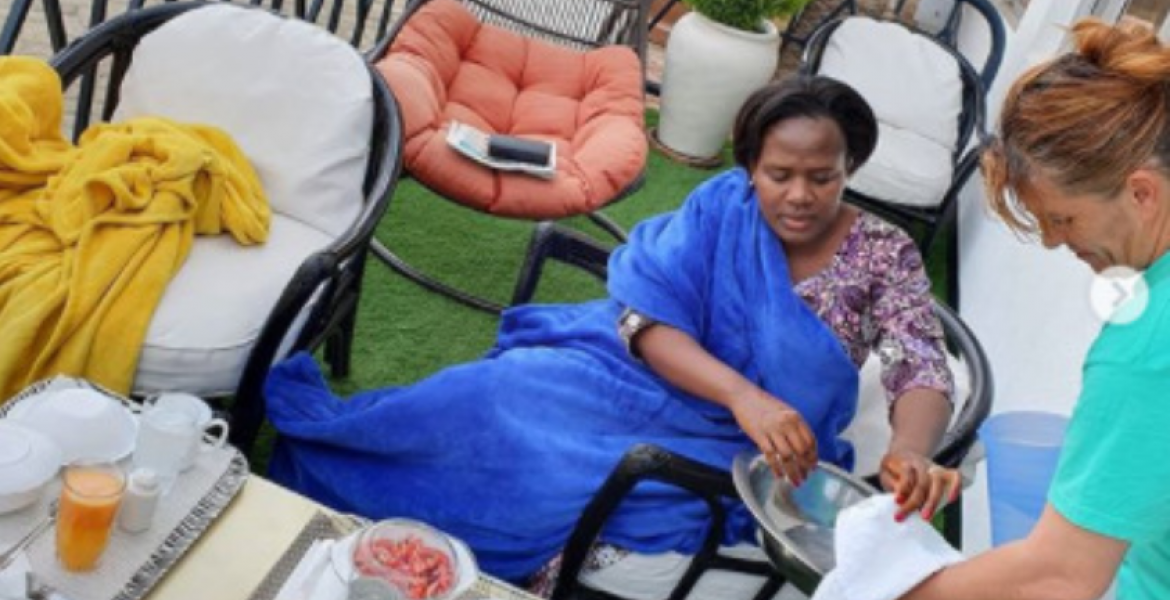 The photos were shared by Atwoli’s youngest wife Mary Kilobi on Instagram, where the woman is seen serving her and her colleague at KTN Sophia Wanuna at Atwoli’s palatial home in Kajiado. 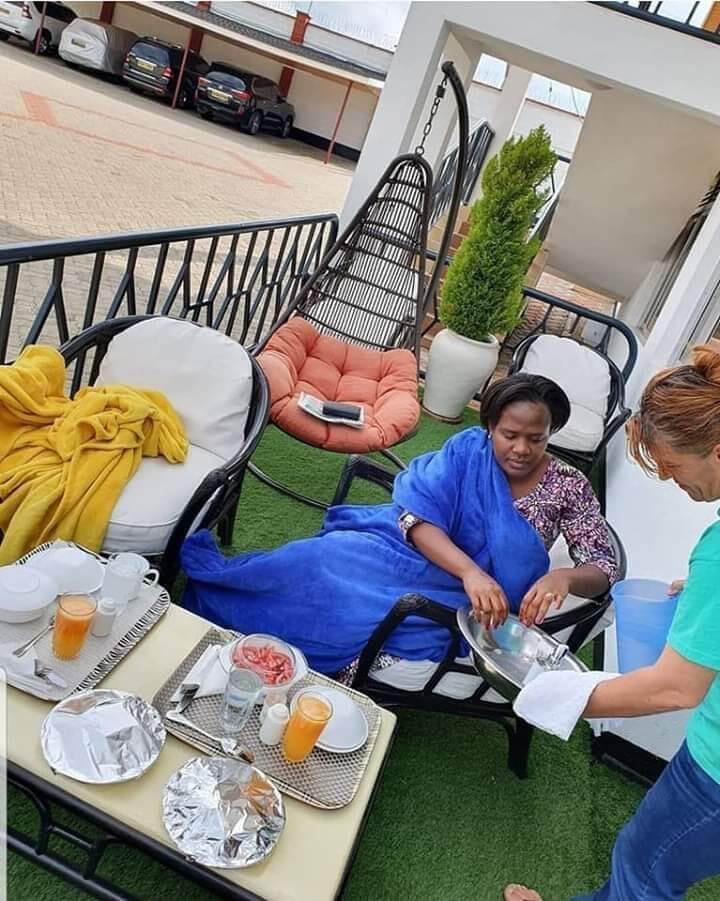 The pictures show the two being washed hands and served drinks by the Caucasian lady who is wearing a green t-shirt and blue jeans. 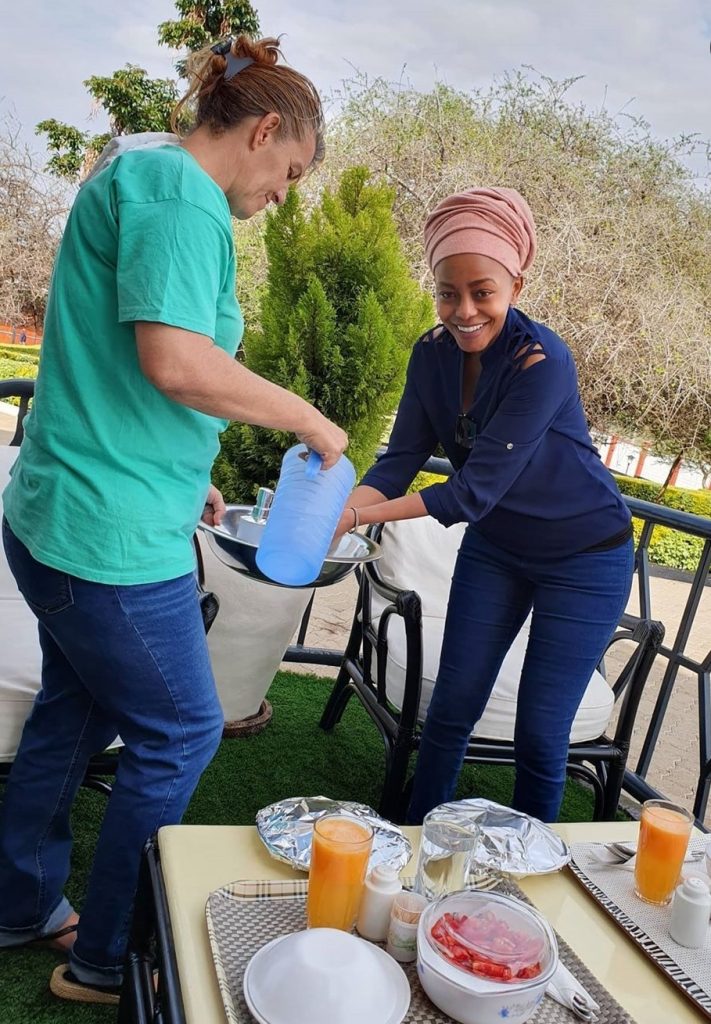 “Yes, it’s that cold in Kajiado,” Kilobi captioned the photos.

Although Atwoli is known to lead a flashy lifestyle, Kenyans online were surprised to learn that he has ‘Mzungu’ servants in his home.

Online users talked of the reserved roles as the whites are perceived to be served but not to serve.

Nderirubob said: “…if I get filthy rich, imma hire a whole team of white servants, have them all wearing that red fez hat while serving me tea while on their knees calling me ‘Memsahib, is the temperature good?” Colonise the colonialists.”

Stella Kanyanya wrote: “I don’t know why this has made me happy.”

Kennedy Didi noted: “This would make Idi Amin smile from the grave.”

Stop Corona posed: “How did the lady get a work permit for a job Kenyans can do.”

This is a big joke. How long did it take her to learn to cook ugali? Chapati, mukimo etc?
Atwoli has forfeited his right to lead the labor movement in Kenya.

Only in corrupted Dynasty....makes Idi Amin smile in his Saudi grave

Next time, she will be serving your tummy-ass husband a blow job!no discrimination whatsoever

Probably negroes are overpaying her.

Who are you calling negroes you fool! Your damn Chinese yellow piggy skin has no material value whatsoever! Come close to my fist so I can lick your ugly face in kind!!

Is she a Kenyan?

Because if she’s not , how did she get a work permit to work as a house-help in Kenya?

Atwoli needs to be arrested for human trafficking. This unacceptable.

True how did she get work permit
Ama more wawili

True how did she get work permit
Ama more wawili

I bet the salary is not the same as would be paid to a Wanjiku or Akinyi!

This is the stupidest thing ever. So what f she’s white? This is embarrassing to the lady. Stupid.

mainly for teaching american english to the kids. smart choice.

There is nothing special here. She needs the money! Period. Problem with you Africans is that you suffer inferiority complex. It is just the skin and hair....nothing else.

....indeed, we can see how "cold" it is... braggadocios flaunters... Mundu aria ahuuna ahubere nda... yaani, if you are blessed to have something to eat to your fill, cover your stomach, don't go showing off...maybe some haven't eaten for days.... Mary, I always thought you knew better than this... but again, it's your right.

Nothing burger here. I am alway served by white folks (and other races) when I go to the restaurant. They even mow my lawn and do handy jobs like plumbing; those that I am unwilling to do.

Maria, Atwoli doesn't have young kids. How can 70 year old man with a stomach such big have kids??

Why are Kenyans complaining when the shoe is on the other foot? Not every white person is rich. Another white girl was makanga few years ago.

I expected Atwoli to be protecting kenyan jobs. Where is Uhuru or the minister for labour. Wajinga!

Kenyans love servitude. To put a poorer person down. Why would someone be washed hands? Can't they walk to a tap? No wonder diabetes is killing most of these lazy and bossy Kenyans

Exactly. Those stupid women can WALK to the tap with their shit eating grins and wash their own damn hands!

She won't even stand! Atwoli will get tired of her one day.

Haitaishi hiyo inferiority complex! You see Atwoli’s wife is worshipping the house worker because of the color of her skin. She even brought in Wanuna to show her what she got!

Maria feels she is better of served by a white woman than her own needy women! The money she paying the muzungu could pay 10 local women so they can afford to send their kids to High School.

It is Maria who has the worst inferior complex in her inner self because she is showing Kenyans who don’t know any better; neneneneee, look at what I go serving me! Wazungus are the worst cooks in the world! I barely can stand a hamburger wrapped up by a muzungu!

Who cares..this is the same man who is supposed to defend and make sure Kenyan workers are well taken care of 🤔

Anyone can work in any job group.skin is nothing.Am mad about some comments above.l live in white populated country,we have educated blacks like whites,we have poor whites like blacks,we have blacks who discriminate whitesand the otherway round.she did application like anybody and got a job.not all blacks are equal and not all whites are equal.