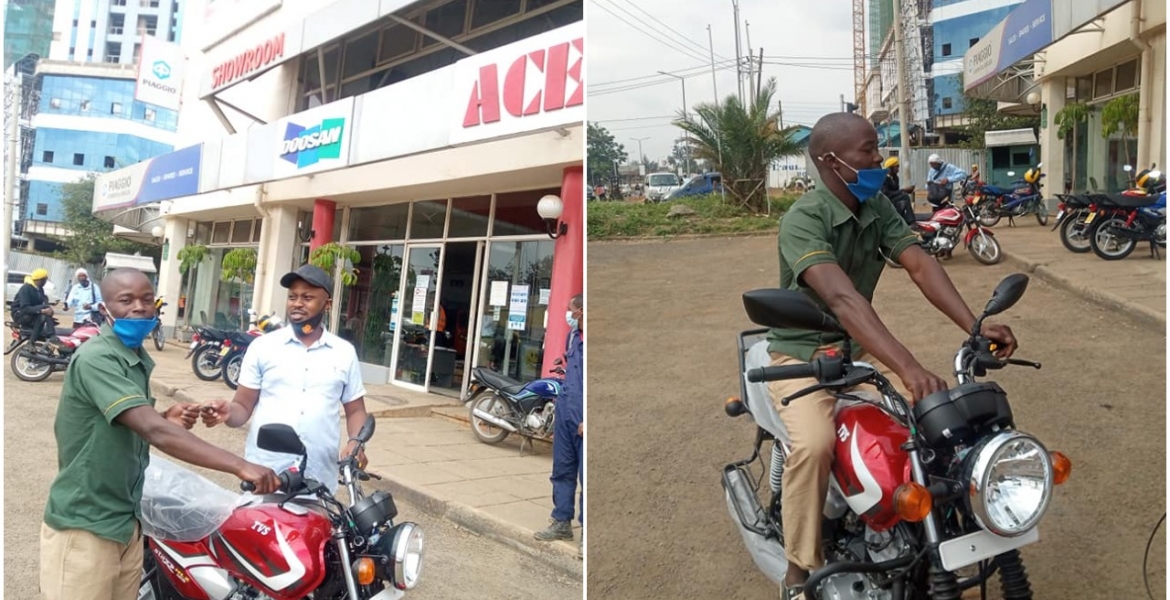 Kenyan TikTok star Alvan Gatitu has gifted a watchman who offered him a place to sleep a brand new motorcycle.

The security guard named Wafula Kizito offered him a place to lay his head after his landlord evicted him from his house over accumulated rent arrears.

Alvan received overwhelming financial support of over Sh2 million from Kenyans online after he shared his woes through a video that went viral on social media.

With his new fortunes, he visited the security guard to appreciate him for what he did to him. When asked to state his wish, Wafula said he always wanted to start boda-boda business but he could not afford to buy a motorbike.

His wish was granted with Gatitu buying him a brand-new bike in addition to assisting him to acquire all the necessary documentation.

Wafula has since quit his job to begin carrying passengers with his motorcycle at his home town, Kakamega.

Further to this, Gatitu helped Wafula’s wife to open a bank account where he deposited some cash to boost their small business.

In the clip, Gatitu, a former Tusker Project Fame contestant, said his house was locked after he defaulted on rent, water, and electricity bills for three months due to the effects of the Covid-19 pandemic on his job.

Attempts to get help from his closest friends failed, forcing him to seek assistance from the security guard who gave him cartons to sleep on in an empty room.

Kenyans who sympathized with him flooded his phone with donations, changing his life overnight.

Alvan, who is also a singer, makes comical videos for online consumption and has become a TikTok sensation in the recent past.

What a collateral happy ending! Thanks to those who chipped in. The struggle is real.

This is what humanity’s all about - an unambiguous realization that we are all in this together. Beautiful soul, Gatitu is

Anyone can appreciate Gatitu’s gesture to his helping hand! Amazingly your best friends are those who offer you the smallest things in life! The security guard offered Gititu the best present he had at the hour of need! A cozy place to lay down his head for a lonely night! Thanks Gatitu for showing appreciation to this young man. You have changed his life and that of his family! Keep shining Gatitu!

Good people come from all walks of life! This reminds us all that we are Kenyans regardless of our backgrounds! Very nice present for a deserving young security guard! That is a true friend Gatitu!!

When you invest in good, it tends to spread. Ok Alvan, get back to TikTok and get us laughing

Good for you Alvan.. very kind of you.. Mr Wafula.. the Lord has smiled on your family 😊

great story with great ending.Blessing blessings follow you through