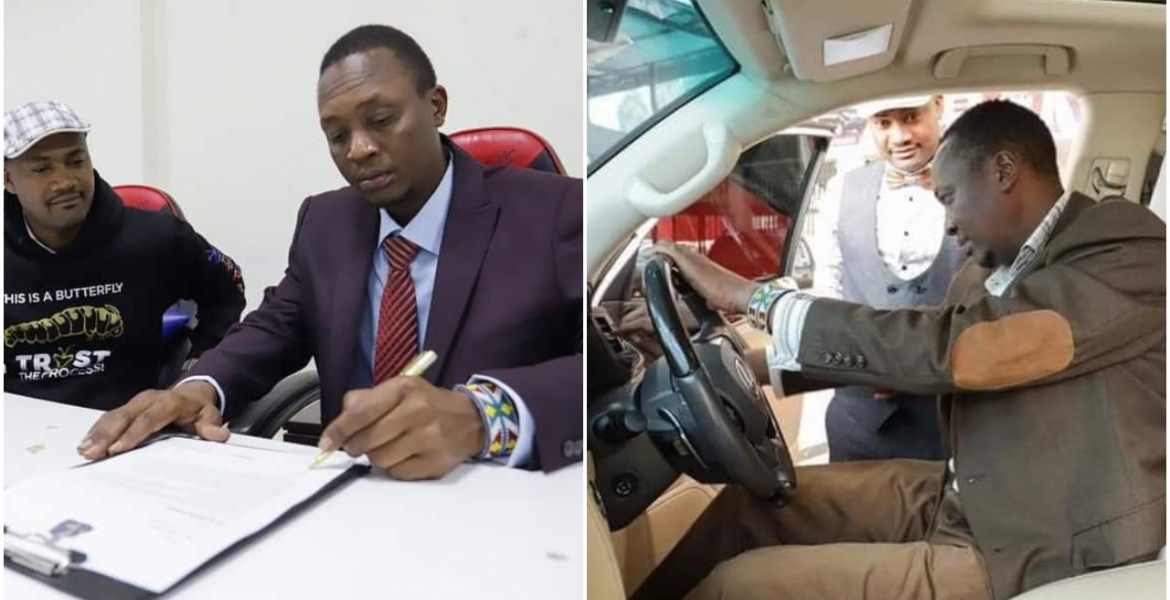 The fortunes of Michael Njogo Gitonga, the Kenyan man who has become an internet sensation over his striking resemblance to President Kenyatta, appear to have changed overnight.

The man was reportedly gifted a brand new vehicle by Maridady Motors on Thursday, a few days after his photos went viral online with Kenyans seeking to establish whether he has any blood relations with the Kenyatta family.

It is also claimed that Gitonga, nicknamed 'Uhunye' by residents of Nairobi’s Umoja estate where he lives, was also offered a marketing job by the same company.

Photos shared on social media show Gitonga signing a contract with Maridaddy Motors on Kiambu Road and receiving a Lexus LX570 car. The company is exploiting his newly-found fame to market itself.

“Fellow Kenyans, which car do you suggest Uhunye takes from our showroom?” the company asked on Facebook on Thursday.

But some Kenyans online raised questions over the company’s decision to gift him a car worth millions of shillings.

“How will that car help him? I’m sure it will be a liability to him. We know he lost his job due to Covid-19, so he needs other means of survival,” Chris Kariuki asked.

Ka Julie, noted: “I’m sure Maridady cannot give such an expensive car for free. We know who paid it.”

During an interview with Inooro TV, the father of three said he cannot walk freely outside without people asking him for handouts.

“I cannot walk outside of this estate without people asking me for handouts. It confuses me because I’m confused as to why I look like President Kenyatta; it is very unusual,” he said.

“Sometimes, I meet people who tell me that they have not had anything to eat and being ‘Uhunye’, I have to give them some money. That name has made me suffer.”

Well, a nice superficial gift. What if he cannot afford Kenya very expensive petrol? Of course he can sell the car and buy petrol. Some gifters......????

Uhenye cannot feed his family with the car. Common sense dictates Uhenye would benefit more if you gave him a job instead.

He can do uber

He can do uber

I think mama ngina brought him the car for him to keep quiet. He half brother of uhuru...DNA speed..who is thinking like me. He got money too....where Hustler to give other people who are not lucky with dynasty...does anyone if baba have given anyone anything...baba trouble maker worthless leader just using people and causing problems....l know l know ...l am all over ..from car to this other things.

Did he get the car and log book, or just the car. This remind me of how Nigerians in the US buy cars for their Kenyan mistresses. Doesn't take long for the ladies to realize that the vehicle was purchased with a no down-payment offer.

FAKE NEWS! He was only hired by Maridady motors, Kiambu Rd for advertising. Wacheni za ovyo

He is a leftie just like his father. Interesting. We know who paid for that car watu waache uongo.

I’m sure Maridady cannot give such an expensive car for free. We know who paid it.” Highly likely his excellency twin brother paid for it.

Wrong.... why would? If anything, its Maama Ngina . . . her life is now open like a book...she might be responsible

I know of one in my area who resembles former president kibaki.

This can be overwhelming for anybody. I would advise him to sell the car immediately and deposit the money in a money market fund account where it can earn compound interest as he figures out how to develop himself with the money. That car is worth ksh20M, per month he can earn interest of about ksh200,000

Somebody was right to suggest that this will be a liability to him. That car wont help him in his circumstances - it wont put food on the table. Unfortunately, hes not surrounded by people who can advise him. I feel that he will be exploited and end up right where he was - Quite unfortunate.

If he is related to Uhuru he must and should demand more.That means his mother and if there are other siblings need their share of Kenyatta goodies.Stop settling for crumbs demand DNA test halafu state your demands instead of settling for handouts /breadcrumbs hakuna mkate nusu you want the whole loaf of bread big brother is the man in charge akugawie haki yako.

Fake news. Maridday is marketing themselves. That guy from Maridaddy sells snake oil to diasporans.