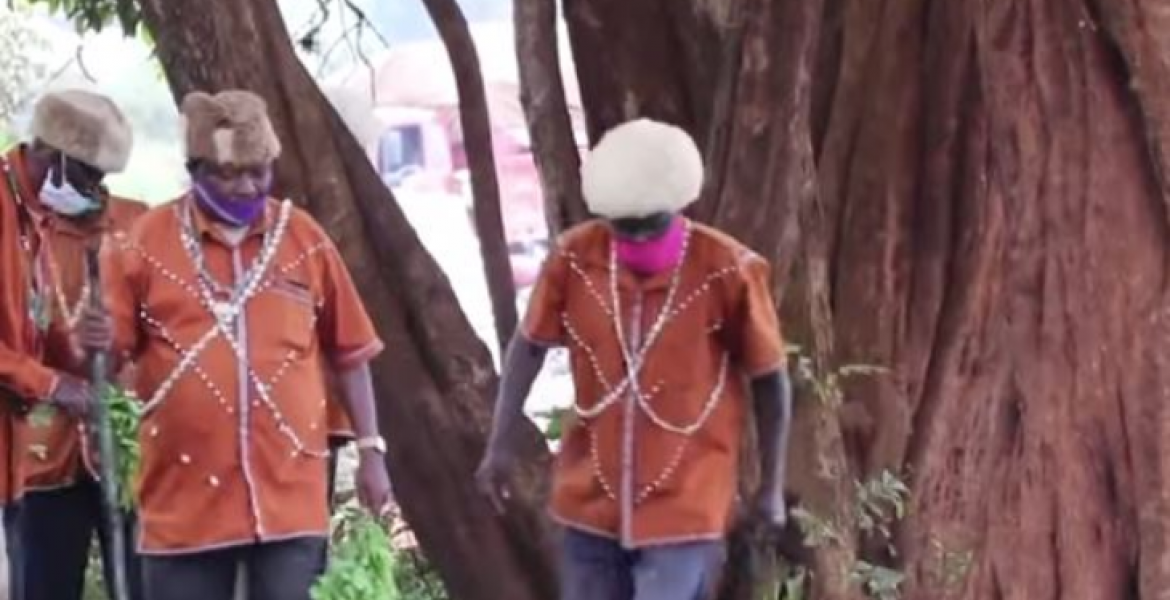 Elders drawn from the Kikuyu community on Thursday held a special ritual in Kigumo area, Murang’a County to beg some trees to ‘accept’ being trimmed to pave way for road construction.

The over century-old miuu trees had outgrown a site marked for the construction of Mugumoini road, according to People Daily.

When the contractor asked to cut down the trees, elders said this could not be done without first holding a special ceremony to plead with the trees.

One of the elders who performed the ceremony said the trees used to be ‘Ngai’s granary’ and cutting them without following the right procedures would have attracted a curse to the community.

“These trees are very old and were ‘Ngai’s granary’ meaning that people would place food harvests at the base of the trees for any passerby and the needy to have something to eat,” he said, adding that the trees were also used to cleanse the community after a war with other communities.

Area Chief Muiruri Wanjihi narrated how three men died mysteriously about two decades ago after cutting and splitting one of the miuu trees that had fallen. Only people who are over 100 years old are allowed to use the trees for firewood, according to Wanjihi.

What is the difference between this tree and the Voodoo concoction in Togo & Benin?

Cut the damn tree if you need to! The road can also be moved a little bit to either side avoid deforestation! Why are you talking to a tree that will never talk to you!! ??Why??

No need to uproot the trees. The road can circumvent them. The trees are sacred.

They are dressed like white men. Very unfashionable white men though. They need to be taught how people used to dress before the white man introduced trousers and shirts. They look like pretenders.

Kenya will turn into a desert with all that deforestation. Very tragic!

Thank you elders for respecting our forefathers. Time has come to respect nature and go back to our roots and our God given values. Whatever has to be done to protect and respect black man's cultures should be done. Value is in our cultures and our people not in foreign cultures. Continue to ignore those who are embedded in foreign cultures that are not beneficial to our people.

How are you going to cut trees a century old for a damn road. Let it be known our Mwene Nyaga will not be happy and a curse should rightly befall on those behind this cruel act. Thaai thathaiya Ngai thaai.

Why cut the trees in the first place. They can snake around them and retain some nice history....stop demolishing history!!!

This is a good beginning respect for the environment and our fore fathers.I hope the Agikuyu elders are not impostors because Mwenenyaga will not hear them.But I like the move, call it demonic or whatever but it is ours not foreign.

I think they aren’t cutting the tree??They said they’ve trimming the branches?Thaai.I love pples cultures n am a supporter of their gods too not the foreign one which many Africans worship who was brought from Europe.