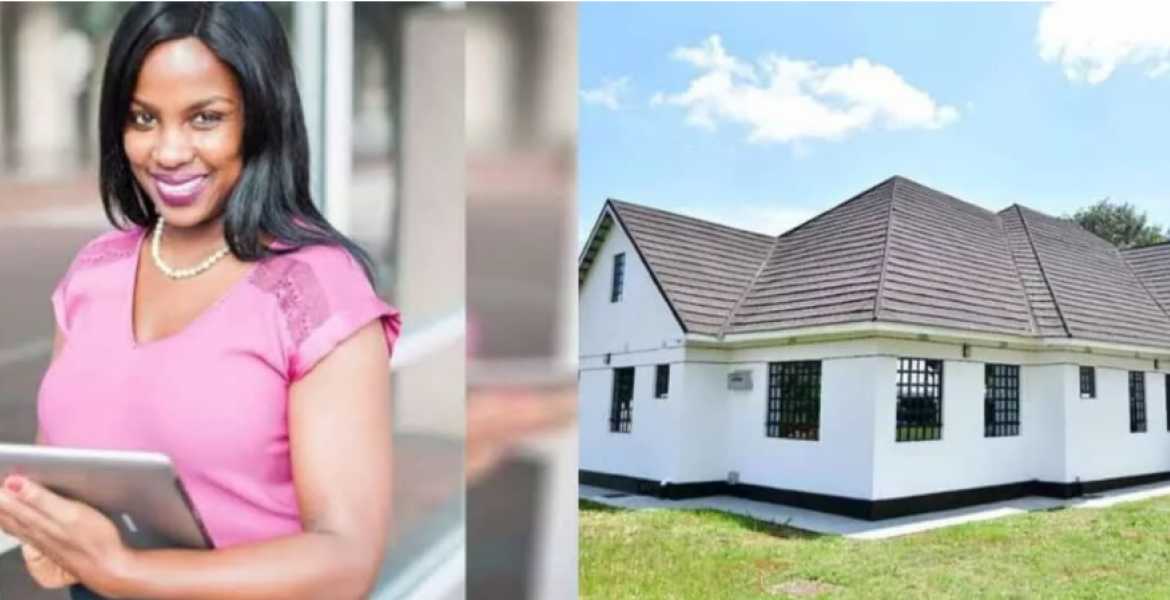 A Kenyan female engineer says she sacrificed herself to build her mother a Sh30 million mansion in Eldoret, Uasin Gishu County.

Michelle Boit studied chemical engineering at Texas Tech University in the US and graduated in 2008. She had hoped her parents would travel to the US to witness their daughter being granted the power to read and write.

Her dad missed the big occasion after he was denied a visa but they agreed he would visit her in the US once she settled at work. Unfortunately, the man passed away before the dream came true.

Being the first-born, Michelle had sworn to take care of her parents and siblings and the passing of her father did not change that.

“I had told myself that as soon as I finish school and find a job, I would take care of my parents. I didn’t want them to suffer in their old age,” she said in an interview with People Daily.

In 2014, Michelle moved back to Kenya after securing a job at Tallow Oil in Kenya, becoming the first African Petroleum engineer. She did not waste time as she immediately began making plans to build her mother a house.

Michelle asked her mother to sketch the kind of house she wanted and she only upgraded the draft to be a modern style.

“She wanted a closed verandah, but since it was supposed to be a big house and was in her own compound, I did an open patio. I also made the rooms bigger,” she said.

As expected, Michelle admits the construction of the house was not easy as it cost her both money and time. She struggled to find a legit contractor and was also forced to make frequent trips to Eldoret to monitor construction works.

“Being an engineer, I held my mother’s hands and told her that we would build the house together,” said Michelle.

“The arrangement was hectic as I would travel to and from Eldoret to ensure that everything went just right,” she added.

At some point, contractors disappointed Michelle and she opted to buy materials and only pay them for labor.

In 2018, the construction was temporarily stopped after the family traveled to the US to attend Michelle’s graduation ceremony for her master’s degree. It was further delayed after Michelle’s mother got sick soon after they returned from the US and was admitted ICU for four weeks.

“I stopped everything to look care of her. It was mentally, emotionally, physically, and financially draining,” Michelle said.

The construction resumed seven months later as Michelle had to first recover financially and emotionally. The family finally moved in on August 1st this year after holding a thanksgiving ceremony where they invited a priest to bless the home.

“I built it as a legacy, for memories and for generations to come. I am also teaching my children to be independent as I don’t want to extremely rely on them financially when I’m old— maybe just their emotional support.”

“I want to break that cycle where the children have to take care of their parents as an obligation,” said Michelle.

You are a smart young lady. Be blessed and may your mother live long to enjoy the magnificent house. I admire smart hardworking young Kenyan ladies. God can reward and bless your hard work, you don’t have to steel the taxpayers money to be happy. You are a good role model to our girls!

We know a 30 Million bob house. That is kedo 7 Mil. Unless I am only seeing a small part of the bungalow!

The actual price is in the eyes of beholder! To the lady, she paid shs 30 million; while to you, Shs 7 million is a fair and reasonable price!!

Is it corona proof? Some news are private and personal and should be treated that way. Off course I am jealous

@Wait a min. My thoughts too. Why is this news? Slow day mwakilishi. Check this out. i just bought a BMW 750 for my mom. If you need further info let me know. See how easy that was to get the good news.

A BMW 750 is not news either! It is not an investment because it will continue to depreciate from the day you bought! At least the lady build a house and an investment for her mother! I sense jealousy here from your end!

It's a good thing this lady build a home to parents -salute for that!. But why is it news? We have many people that have done the same. As other people mentioned below, this is your private life.

@Mwakilishi - sometimes you should filter these news & stories that you feature to us! You have done great work featuring current but i am not sure why this story is part of the news.

Hehehe @ mzee mmoja that’s true hio sio 30m house especially in gichagi huko ELd.My question is do u want us to hear u build the house or ur insisting too much that it was 30million!N if u spent 30m for 1 hse it is called wasting monies when u yourself is employed n u can get fired anytime.U could have Spend 7m as mzee mmoja said then the rest u start yr own company instead of bin employed.Otherwise kograts for returning back home from slavery country USA.

Why is this a news item?

This story does not add up. I guess that's why it had to make it on this media channel. Why do we have to lie in numbers in order to get attention? Or is it that we're demanding respect? Please, it doesn't take a genius to do this simple math

Good story but private life or not newsworthy!

Well done, now that mansion needs lots of grandkids, otherwise it will feel empty and lonely to that woman

Congratulations Michelle. This is what most immigrants do for their parents once they are in a position to, they just don't parade for recognition by people who don't care. Hopefully you know how to keep your other personal businesses private.

Wow! Powerful! absolutely wonderful news! good for her. May that mama live a long happy life and greatly enjoy that gift!