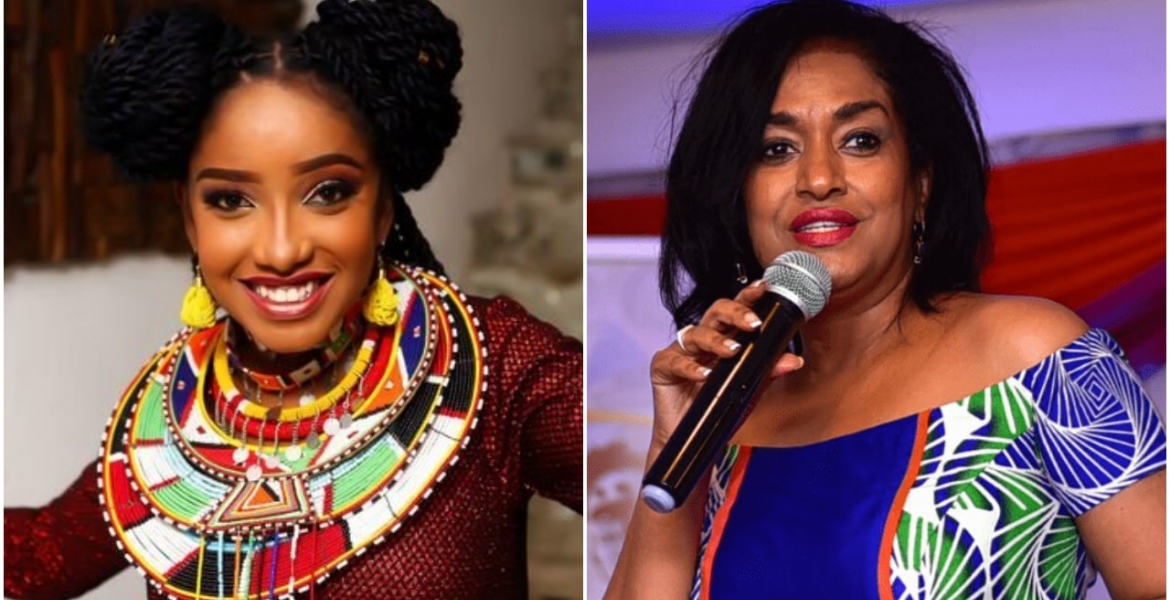 Nairobi Woman Representative Esther Passaris has thrown her support behind media personality Anita Nderu after she publicly revealed she is LGBTQ+.

Nderu made the announcement through her Twitter page on Thursday, saying she hopes her children will not be subjected to what she has gone through for being a member of the lesbian, gay, bisexual, transgender, and queer (LGBTQ) community.

“I hope my kids never have to go through what I have gone through for being LGBTQ+,” Anita wrote.

The former Capital FM presenter’s tweet sparked mixed reactions among social media users with some supporting her while others abhorred her.

One of those who defended Nderu is Passaris, who urged people not to judge people based on their sexual orientation or gender identity.

“We must all commit unreservedly to the fight against homophobia and prejudice,” Passaris wrote on Twitter.

Below are some of the Kenyans’ reactions to Nderu’s tweet.

@PatrickKaburu said: “There is NO room for homosexuality and lesbianism in Kenya. The sooner those guys and their supporters will understand that the healthier and better for them.”

@mulidenno tweeted: “@AnitaNderu Future generations will be better. Right now the wider Kenyan society is way too myopic and backward. Especially the ones steeped in religious bigotry. They persecute while opposing persecution. You are on the right side of history.”

@edwin_shoo said: “The LGBTQ community is trying to condition the masses into accepting their lifestyle as being normal...hence, coming out publicly as gays...They are trying to social engineer society...The saddest and most evil thing is that they are targeting children.”

@teega_ti noted: “Supporting LGBTQ is a calamitous calamity. It is outrightly denying a jealous God who hates such evil that destroys marriage and the basic foundation of any nation doesn't exist. Devil is real.”

A cow and a bull know to find each other, a rooster and a chicken the same. Wild animals know what nature and God intended for procreation yet man with his so called High IQ is stuck in Human sewage pipe line looking for love, sorry, looking for lust. When God's law is let reign supreme, what Esther Passaris and Anita Nderu are doing in Kenya is an abomination. God is not mocked!!

It is a fact gay people r in Kenya. It is also a fact that gay people r not causing the Countries corruption, gay people did not blind side Waiguru n all the high power theives to steal millions, gay people r not to blame for poverty n hunger in the country. Gay people only want the same rite as anyone else n i see nothing wrong with that. If u wanna fuck a man, woman good for u but for those Kenyans mounting Donkeys,how dare u as u know it cannot hee haw yes or no.

We have learned to glorify pure evil as you see pas-saris doing here! No wonder her male husband left her to go look for a real woman! The Greek goddess can always go practice Lisbo activities in Greece!

Cute girl which letter of the alphabetic did you scoop or claim? I am going back to muratina since I cannot believe I did let you down to tha point.

For those who may not know: Lgbtq is the Main reason GOD completely destroyed Sodom And Gomorrah. In his Anger against homosexuality, He burned the 2 cities to ashes.

@mulidenno you're on the WRONG side of History waiting to Die miserably of 1st hand HIV/AIDS.

The christian and islamic faith condone homosexuality so if you belong to these faith just be quiet and take the bitter pill.None of the African spiritual faiths would condone this vice. We have to worship our God not the gods of the slave masters.Mwacha mila ni mtumwa.

Personally, i see LGBTQ as a form of mental illness and need to be addressed like any other mental illness. It is a behavior that is learned and not inmate.

The west has always hidden themselves behind their fake " white- jesus( Ceaser Boggier) and a gun to promote their agenda against people who believe in the real God of the universe (black nation)
This is what they have always done to destroy black nation culture. This time they are being revealed and we are being restored.- The moral bankruptcy of foreign christianity is on display here." Nations at war". This will be one of the dividing issues(lines) between the western nations and black nations. Let's keep watching.
" When God divided the sons of Adam...." Time for Revelation and Restoration!!
Anita Nderu and Esther Passari's will either join their western master and keep praying to a white
jesus or humble themselves and keep God's laws!!

Anita has courageously come out and declared who she is. Many others including some making comments here will condemn LGBTQ from rooftops and then sneak to their lovers when they think no one is seeing.

Who cares, let them be, please don't just shove this BS up our throats.
They don't deserve better treatment as they so portray.
I ain't judging but keep it yourselves.

This is 2020. Homosexuality is as old as humanity and is here to stay. Let people love who they love. Pilipili usoila yakuwashiani? Homosexuality would not make it to the top 100 of Kenya's problems.

Where are these righteous pretenders when public funds are being siphoned by a greedy few and the poor oppressed by the powerful?

Give us a break Mumbi! You are so mixed up to a point you do not understand which topic to address! You are heading in the lesbian direction since no man wants you! Just do it and keep it in your dark bedroom as you put your mouth down yonder! A real woman won’t publicize what she does in her private moments! Munatuchokesha with nonsense!

So @Mumbi you talk about the “righteous pretending” which tells me you are aware lesbianism is immoral and dirty!

By the way, the number of women in Kenya is over eight times larger than the number of men! You can have a donkey as your lover and no man will care about your business!

We understand that not every man want to carry the burden of marrying 8 wives to meet your sexual needs!

Walid I forgot to add quotes around the "righteous" hypocritical pretenders who look away when women in labor are turned away from Pumwani to birth on the street. They keep quiet when billions in public funds are stolen. Yet they are very quick to call out LGBTQ+. My apologies if you thought these holier-than-thou idlers are righteous. I believe consenting adults should love who they want without persecution.
We have bigger fish to fry.

Anonymous UI I agree with you totally in the christian and islamic faith homosexuality is allowed that is the culture of these faiths,it is happening in the churches and mosques.If you belong to any of these faiths that is your acquired culture but it goes against your spirit that is why there is a conflict you cannot be in christianity and islam and be part of the African culture it is one or the other make your choice.I hope I get an amen for the truth.

The lgbtq are known to sexually abuse young children who do not know any better! I’m surprised passaris has now come out to declare she is a member of the lgbtq! Folks need to protect their kids when passaris passes by!

There are more pointed and important issues we as Kenyans need to attend than passaris making love to nderu! Both of them can support each other in bed but keep that stupidity there when they are done!

Normal couples don’t blow up a trumpet after a sexual excursion in the bedroom! They take a nice warm shower and head on to a movie to ice up on the good time experienced earlier!

Who is telling nderu not to hang out with her fellow sisters who enjoy the same stuff she is accustomed to? Nderu says she has gone through hell dating other women - something we don’t care to know because it is insignificant to the whole society!

And by the way, you have to be a mature woman to narture child! You shouldn’t have a child if you do have mountains of personal psychological issues!

Esther - you don’t have to lie to get an extra vote! These politicians are pure beasts! They will support anything to get a damn Vote! Well, let’s wait to hear from Sonko and Sakaja!

And Passaris just passed on a code word to nderu; come baby 👶 come! I’m ready for you gal!

Why the need to tell the world about what they don't care to know. Your private life is your business. What problem have you solved now that you have paraded your sexual preference? As for your kids,deal with it. You are the parent and you have set a good example for them to emulate so save your life minutes

Passaris - whomever you love is your individual business. Keep it to yourself and no one will condemn you!

Stop selling us short by undertaking a reverse psychological manipulations so you can tell us that your bed warming partner is another woman!

Your partner your business! A female dog will do you just fine! That is strictly your business and no body else’s! Stop selling us short with shit!

Your intent @passaris is confuse some more little girls so you can create a huge pool of more lesbians! That is not what we elected your ass to do when we are paying you with our taxes! You ought to have your Indian ass ashamed for sleeping with women.

Now I think Miguna Miguna was right about Esther! I wonder what mm would say with this latest admission by passaris! But does he really care about an old skirts chasing same sex young thingy?

Politicians and the so called celebrities should stop confusing the youth over matters of sexuality! Kenya is loaded with Myriads of needy issues that deserve constant attention for the country to move forward!

Let these folks stop being self centered discussing bedroom matters while the general populace is dying due to lack of service delivery as we have recently seen in Gathanji ward in Nyandarua county where an elderly man died trying to reach a hospital.

Keep your sexual desires to yourself ( or between you and your significant other - man or woman) and let us all join hands to develop Kenya!

This nonsense of talking about sexuality and personal bed screwing issues must be stopped immediately!

Who cares who anyone chooses to love? We have bigger hot potato issues than having men and women publicly break down emotionally discussing stupid matters simply because no one is willing to have sex with them!

Kenyans, especially the youth must stay above the fray not to be misled by useless old politicians like Esther whose life expectancy is nearing the end and she could care less if the country is moving ahead.

I asked the youth not to allow the dirty politicians to use while the politicians are taking our country to the dead dogs by encouraging discuss on petty issues while they have stolen our future already through many corrupt means! What good is it for us knowing that Esther want to make love to nderu????