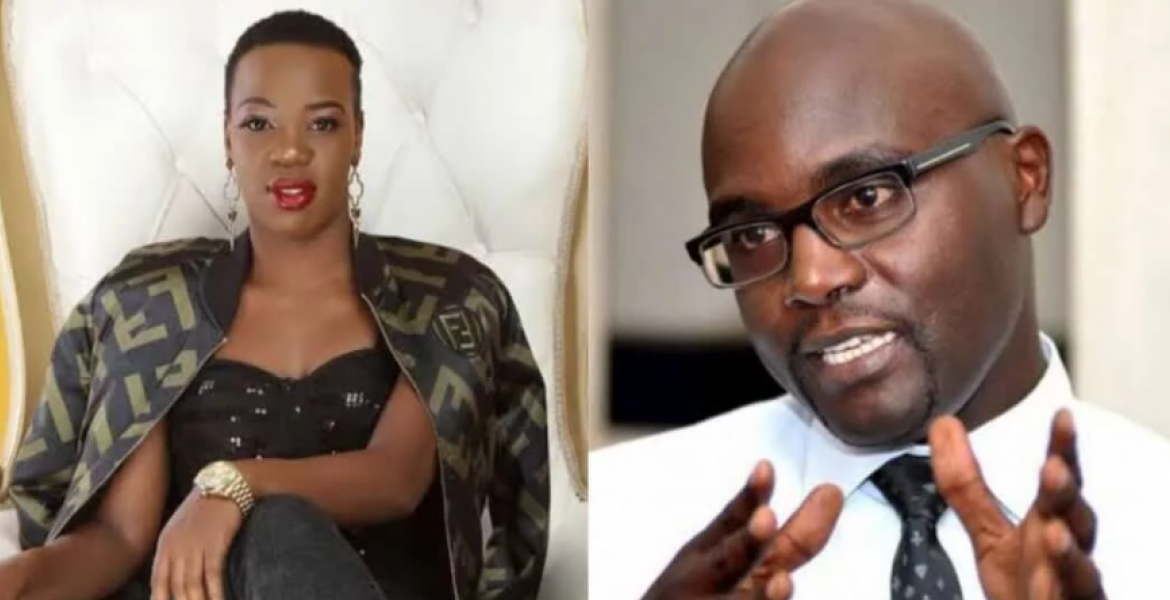 Atheists in Kenya (AIK) Society has welcomed gospel singer Ruth Matete to join the movement after she recently denounced religion.

AIK president Harrison Mumia hailed Matete’s decision as he pleaded with her to join them and experience peace of mind.

He indicated that he was also once a Christian but he ditched the religion to become a nonbeliever after experiencing hypocrisy in the church.

“I would like to tell Matete that I was once a Christian just like her, I witnessed the hypocrisy in the church. While Christianity brands itself as a religion of love, justice, and peace, these traits are nowhere to be seen when you examine the life of most Christians,” Mumia stated.

“I challenge Ruth to abandon Christianity for atheism and experience the peace I’ve experienced as an atheist for over 20 years.”

Through a social media post on Saturday, Matete opened up about her experience with fake religious people following the death of her Nigerian husband, pastor John Apewajoye. She called out religious leaders who hide behind religion while persecuting others.

“Can we talk? I know this will land me in trouble with the Religious people but hey! So now, some of you have some weird audacity. You have never liked me from the word go and that’s alright. When I was going through hell and high waters and scandal was my name, you turned and kept your distance. You only wanna associate with me when am the star and being celebrated. But when the rubber meets the road, hamnijui. Wah!” She wrote.

She added that church leaders abandoned her with some prophesying that she would be jailed over her husband’s death.

“Kama kuna kitu ilinihurt that time is when pastors I have ministered in their churches left me. Like no call. In fact, some of them came up with prophecies during their live broadcasts saying that God showed them I’ll go to jail and that I was guilty,” she added.

“Then now, God has vindicated me. I have had to pick my own broken pieces and try to move on, you’re back! Wow!! Calling me. Texting me. Telling me you were praying for me. Mercy Lord!! Was it so hard for you to just call or text and tell me that? You avoided me like a plague.

“You didn’t want people to know that I serve in your church or I have ever served in your church. Indeed, the heart of man is wicked. Some talked and talked and I have proof. But now you’re my number one fan since I came back on social media. You comment on all my posts. Like everything I post. ‘Yes Pastor!’ ‘We love you’,” she added.

Apewajoye, 42, died on April 11th at KNH, where he was receiving treatment for burns he suffered while allegedly trying to fix a gas cylinder at their home in Great Wall estate in Athi River on March 30th.

Ukifuata "Nyayo za Mwana Mariamu na Yusufu" utakuwa mtu mbaya sana. Why?
If you follow the "footsteps of the son of Mariam and Yusuf," you will be a very bad person. Kwa nini?

Hebu soma Matayo 10: 34-37. Anasema hakuja duniani ili kuleta amani. Alileta upanga.
Just read Matthew 10: 34-37. He says that he did not come on earth in order to bring peace. He brought a sword.

Please read John 2: 14-16. You will be surprised to see how the son of Mariam and Yusuf made a whip and used it on human bodies in the temple

In addition, the son of Mariam and Yusuf tells the people to hate their family members in order that they can be his followers or disciples. Please read Luke 14:26

Finally, let us not forget that faith is basically one construct of a people's culture. Therefore, you cannot integrate other people's religion in your culture. Useful foreign elements that can be integrated into your way of life is science, technology, and how to make things that are useful to your culture.
Mimi namwamini MWUMBAJI MKUU WA VITU VYOTE ambaye kazi yake ilimalizika kabisa alipokuwa akili. Usipoilinda na kuichunga 24/7, itatumiwa na watu wengine kwa raha zao.

I believe in the ALMIGHTY CREATOR OF ALL THINGS whose job was finished when the CREATOR gave you the brain. If you don't guard it and protect it
24/7, it will be used by other people for their own advantage.

The "In paragraphs " translation is refreshing. By doing this, you are deepening my Kiswahili knowledge and understanding. Keep it up Imara!

Religion has truly set Africa back centuries. Africans like to take stuff and perfect it more than the person who gave it to them. I believe in God, pray but religion is questionable.

Wanjohi... point me where she has denounced the faith in your writing... Fake News... Now than ever l agree with President Trump... Fake News... from Corona death rate to this News now.... Fake, Fake, Fake. I will no longer read Mwakilishi for Fake news... Join me is abandoning this newsweek or whatever it is called.

You can leave. You won't be missed.

Agree or disagree with Trump? You are still a shithole in his books! Kind of stupid of you to quote another anti Christ here @ Gaki!

Who invited you to read Mwakilishi news in the first place? Wow, gods must be very crazy in your gaki head!

There is no question about God (the most high) but religion particularly christianity and islam, these religions have been used to brainwash and oppress black people we need to open our eyes and use our brain to realize we are living a lie and passing it on to our children, so we can be inferior to white people and arabs. I have been called the enemy for speaking my mind lakini nitaongea mpaka maskio yawaume so get used to it.

The English translation is accurate: " I believe in the ALMIGHTY CREATOR OF ALL THINGS whose job was finished when the CREATOR gave you the brain."

TUACHE UNJINGA...IF THERE WERE NO GOD, IT COULD HAVE BEEN BETTER INVENTING ONE.
I DON'T CARE ABOUT RELIGIOUS SECTS...
AT LEAST MOST PEOPLE WILL AGREE WITH ME..
THERE IS ONE SUPREME BEING, BUT UNDER DIFFERENT NAMES.
EG...GOD, ALLAH, NGAI, ETC.

Wasn't she recently accused of murdering her husband? She is infected with Nigerian demons. She is more dangerous than Coronavirus. Please keep a twelve feet distance from her people!!!

Did you conduct the dna test? He comes out another lunatic who gets bated like a little from in the shallow water!

A dude who claims to be a scientist comparing a women he has never met to covid19 is utterly unbelievable! Chris where are you to defend this idiot?

Hanene still practice Meryl Witchery. This is a very dangerous man to be entrusted with science! Literally!?

@koni - the Nigerians that I know have a deep passion for God! They pray in everything they do! They love and fear God equally and are not ashamed to show it.

Your small mind is full of distortions. You are a very dangerous fool and I can’t believe you are this shallow in your realm of life! You are a total shame to those who put Dr in front of their names for the glory of it!

Now I understand why you have turned out to be a useless tool in what you do! A man of your credentials (if any) should never make some sweeping devilish statements! You are a shame to your family!

Stop spreading hate here. You are a doctor for Christ’s sake! Ask your mama how to behave! You have very poor manners for a PhD hold! You reduce to ashes your position where you test covid19 is that is your job! KMRI should just fire you for your toxicisity!

You come out as a Demi it I’ve bully when it comes to women! Merry mean actually know better, but unfortunately your father (if you had one) did not train you well as it appears here in you verbosity!

Why would you lay out your ill mannered monologue on this women you do not even know!!?? And you have no shame putting all your titles out there to crown the insults as you seek for the world to live you!!

I’m urging you to change your myopic outlook of matters life and start appreciating other human beings as they are and come!

Seek spiritual guidance from a well grounded preacher because Christ is bigger that seventh day denomination! Christ came to save sinners and those who are lost! Remember the woman at the Well and Zachias the tax collector? What did Jesus say to them?

Humble yourself dude and God can appoint you to a fisher of men! Unkind words coming from your toxic mouth 👄 have made people run away from God’s work! You ain’t any better because you hold a PhD! Anything; covid19 included can knock you over! Stop insulting others so you can have a “doctor feel good” moment while others are down yonder! Really! What a shameful act of rudeness!? Acts of kindness matter every single day - be a good model of Christ Juses!

You need to apologize in Jesus’s name right here, publicly to the women you are hurt!! So long earthly doctor!

You are the enabler to atheists Koni just by the way you carry yourself with lots of disgrace! You have no the gifted love of Christ in you! Why are you so bitter while you should know much better? You should be the light of the world messager here on earth! Shouldn’t you?

“ “I would like to tell Matete that I was once a Christian just like her, I witnessed the hypocrisy in the church.” And this is where your situation went down sir.. your witness and affirmation was from men... the church was your god not God Himself.. everytime you look at men or yourself... you are bound to either rip yourself with self condemnation and guilt or pass judgement... if you had a relationship with JESUS, then He should have been your plumb line... I hope someday you ask Him to be your Lord and not the church. We in the Church are broken imperfect peeps but we have been perfected by Faith in Jesus! Thanks am not taking an offering today 😊

Yeah right! Created sick and commanded to be well..keep your depravity to yourself.

your problem is religion not God.You need to see a psychiatrist

First I would like to send my deepest sympathy to Ruth and I understand that humans are real trash, second I do believe we have a divine being because there's archeological evidence all over the world but the problem is we Africans want to use God as fairy god mother who grants us a wish every time we ask for it. We would rather spend 3 days in a church than spend 3 days reading a book about finance, health and other social problems. When God said he has good plans for you he was talking about going to heaven not making money. Finally shame on those Christians who accused Ruth with no evidence and shame on those pastors who gave out fake prophesies regarding her jail term.