Miguna Miguna Offers to 'Swear-In' Trump as the "People's President" 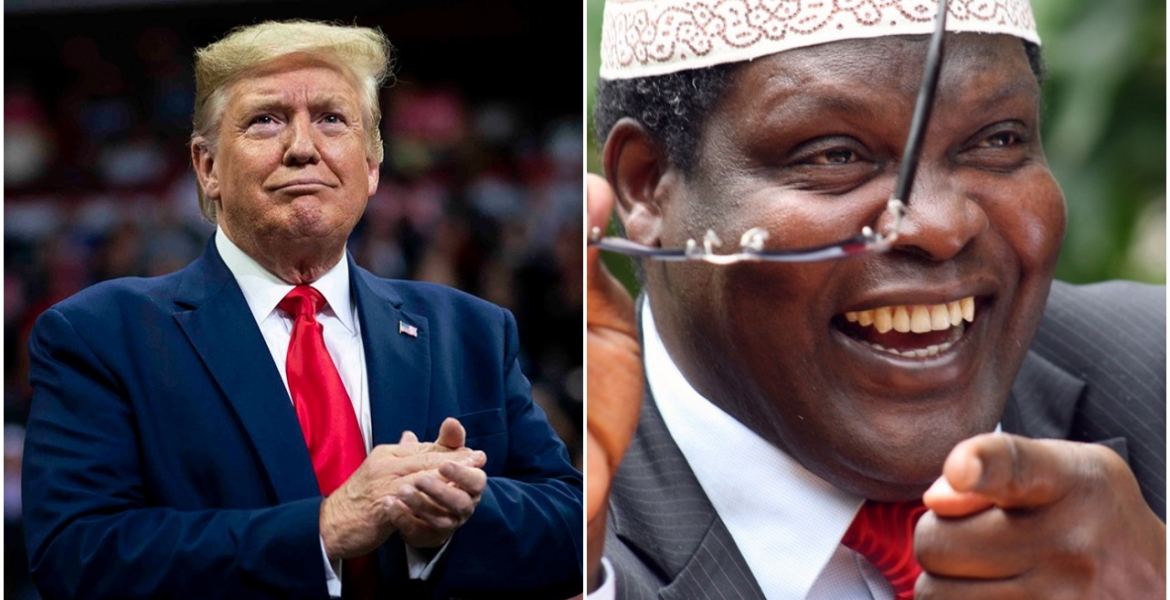 Through social media on Wednesday, Miguna said he has received many requests from Kenyans asking him to administer an oath of office on Trump.

Miguna, who describes himself as an experienced barrister and solicitor in Ontario, tagged Trump on Facebook and Twitter, asking him to contact him so they can discuss “fees and other incidentals.”

“To Mr. Donald J. Trump: I am an experienced Barrister & Solicitor in Ontario, Canada. I have received instructions from millions of Kenyans asking me to swear you in as "The People's President." Please get in touch so that we can discuss my fees and other incidentals,” wrote Miguna, who presided over the mock swearing-in of Kenyan opposition leader Raila Odinga in 2018.

Democratic candidate Joe Biden continues to hold lead over Trump in the 2020 presidential election as vote counting continues in seven states. Biden is ahead in the Electoral College race with 237 votes against Trump’s 213, according to the latest projections by CNN.

Trump had earlier falsely claimed victory and made allegations of electoral fraud even as he threatened to move to court to stop vote counting.

“We were getting ready to win this election. Frankly, we did win this election. This is a major fraud on our nation. We want the law to be used in a proper manner. So we’ll be going to the US Supreme Court. We want all voting to stop,” he said during a briefing.

This guy Miguna is drama King.

He is a idiotic drama QUEEN!!! What is wrong with you Miguna Miguna???

Chill... miguna is a learned fellower.. I welcome him to USA to help us swear our President..l voted for him and l am a kenyan....

Wewe bure kabisa! Ought to be very ashamed of your very small mind! Bitch!!!

Look at the electoral map and head on to your shithole country!

Take a damn class in American history and try to understand what has been happening in the last 4 years! Sorry lady; you ain’t all that intelligent! Don’t insult in our own country that many have died fighting for our civil rights! You are literally benefitting from the blood and sweat of others who can’t call where you come from home!

Precisely!! I support your concerns here! Our forefathers and mothers, grandparents tireless fought for the freedoms this Liz enjoys today in America! And like this lunatic lawyer wants to insult us, this ignorant woman now wants to shit in our 👄 mouth! Really, I just hope she is not speaking on behalf of the many Kenyans friends that I have! Liz lacks decency and compassion for the American people! I’m really ashamed of the ignorance she portrays here!! Wow!!!

Go to hell in the earliest bus possible. You are another drama queen who thrives on conspiracy theories, witchery and stupidity! Who gives a damn that you voted for a loser? Shithole!

You are a shame to humanity @gati! Times have left your mind so behind that no reconnection can salvage your simple mind!

You have the right to pack up your junk and leave America! You sorry geek!

So @liz, what gonna do now that you wasted your vote? Please stop using the name of Kenya in vain!! Please 🛑 stop!!!

@liz - you should apologize to the American people for your brainless utterances here! Thank God that freedom of speech exist in America; woman!!!

@Guest1, he is! Come to think of it, he has the same personality as Trump. Bad losers, highly strung and self destructors. I feel sorry for our kids, this is the history their children will be taught. 2020 is a year I wish to put firmly behind and in fact I probably will! The world is watching U.S and if they go the Kenyan way.....well the Russians will all be good to laugh and mock them! Shame.

Ok @miguna - you are still from a shithole country and your experience in swearing others in as “people’s president” is equally shithole!!!

You can swear in your crazy buddy because you got nothing to loose! Shame on you!

Miguna is from Canada. It's not shithole. The other country is the shithole. Otherwise, even you, what would you call a country that changes constitution just to please a few politicians?