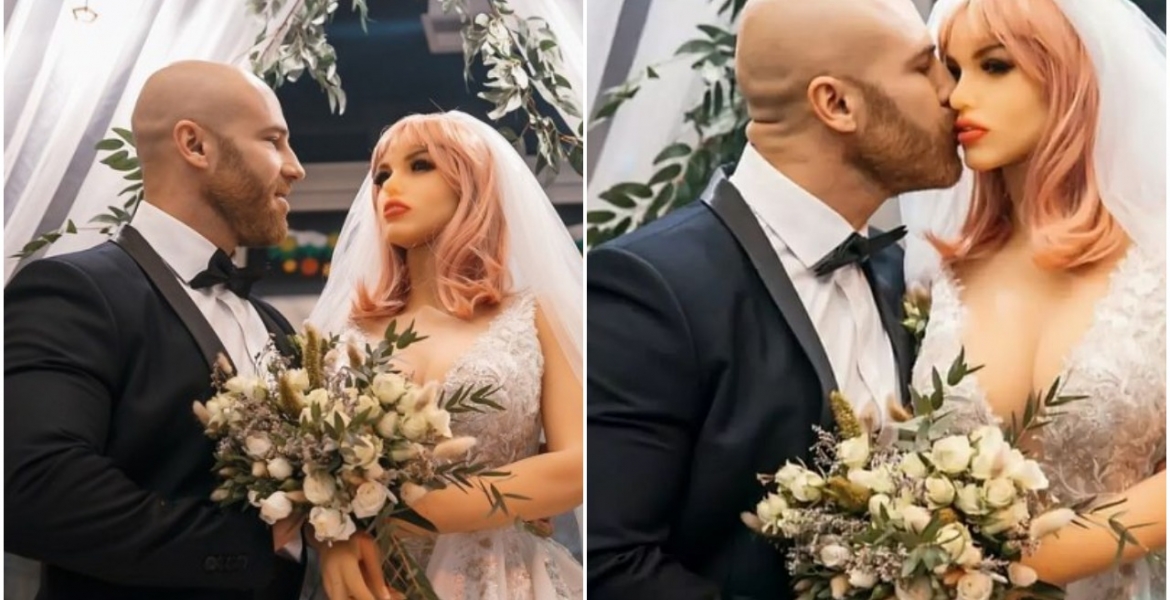 The two tied the knot in an unusual ceremony attended by their family and friends last week with Tolochko taking to social media to share a video and photos of the occasion.

The bride was dressed in a plunging white lace gown while the groom was in a black tuxedo. The two posed for professional photos before celebrating their nuptials with drinking and dancing.

Tolochko, who identifies as pansexual, has been dating Margo for two years after they met in a nightclub when he (Tolochko) stepped in when she was being attacked by a man.

The couple was initially set to make their union official in March but the wedding was postponed due to the Covid-19 pandemic.

The wedding was delayed for the second time after Tolochko was allegedly assaulted at a transgender rally where he arrived dressed in a pink mini-dress. He reportedly suffered a broken nose, concussion, and a chunk of his front tooth was chipped off.

“When I presented her photo to the world, there was a lot of criticism and she began to develop a complex so we decided to have plastic surgery,” he said, according to the Daily Star.

"She has changed a lot. At first, it was hard to accept but I got used to it later on. It was at a real clinic with real doctors."

This guy is onto something. I see what he did there. That’s going to be one peaceful home, no nagging wife. I’m adding this guy to my list of heros.

At first it sounds crazy,but take a careful look at human progression in developing tools,and his technology.
The idea of man flying was unrealistic.Retouching a detached penis,or hand was conceivable only in theory.
A sperm and an egg could be United in a test tube,and planted in a barren womb.
Speed of the fastest processor 8.4 gigahertz.As you can see human beings are doing what few year ago was improba ble,or impossible.Given this,why should this"improbability"not spill into their personal lives as well?
My future prediction as I have said before,is that our behaviors shall be dictated by law, coupled with sience.Morals will not be absolute/stayic,but evolving as sience reveals our ignorance.Given this backdrop,what the body builder has done,is just a first,and as such homosapiens are not used to.Give it time ...And please note this is not for every body,just like man landing on the moon is not for everyone.Some people still believe that it did not happen.My two cents.

Those poor relatives and friends who had to be subjected to this fake wedding so that this maniac could get some views on Instagram or is it Facebook same difference He belongs in an insane asylum .Pornography is an addiction just like drugs and alcohol or for some races even food.Fat white people who have to be airlifted to hospital because their fat behinds cannot fit in an ambulanceThe first step is accepting that you have a problem and seeking help not attention.Since you cannot handle a real woman you opt for a doll bury yourself in the sand and hope that your morphed reality is the real thing by having a wedding ceremony.How much did you pay the person who had to officiate the ceremony is it even legal to marry a doll or it becomes legal when you say it is.How long before we start marrying our pets heck crazy while people list them as dependents on their taxes every year.

Is fame or stupidity?? I grown man acting like a mentally handicapped fool!