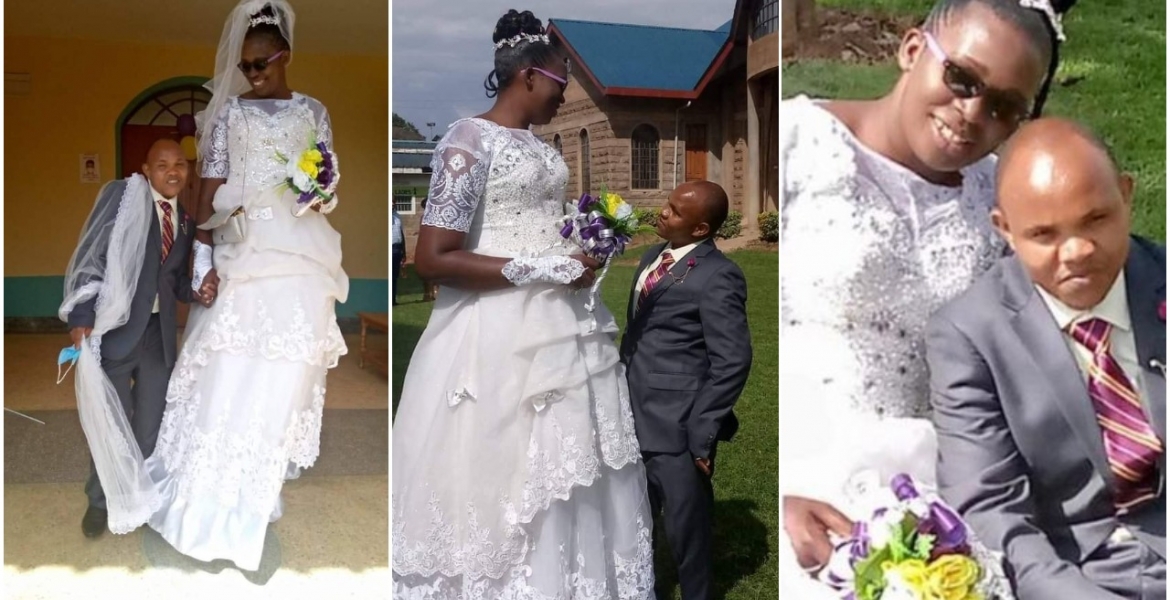 A Kenyan couple whose photos have gone viral on social media following their wedding last weekend has spoken out.

What caught the attention of Kenyans online is the huge difference in height between Lilian Wawira Gatimu and her husband Ezekiel Mwangi Maina. 28-year-old Lilian is over 7 feet tall while Ezekiel, 33, is about three 3 feet tall. 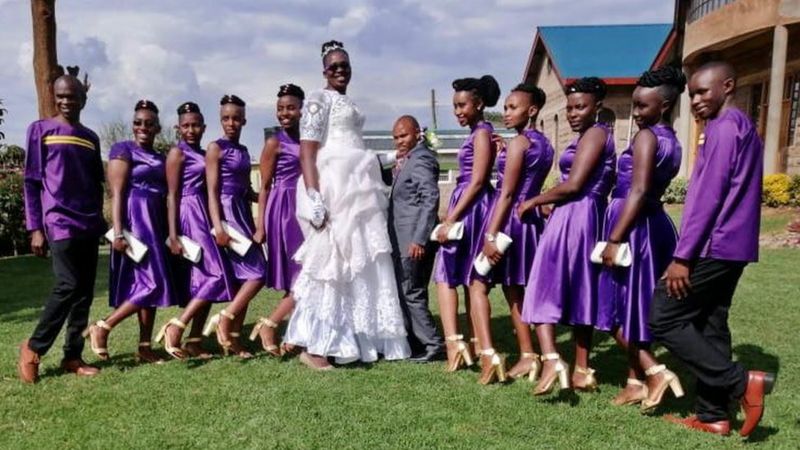 The two lovers tied the knot last Saturday having dated since 2017 when they met at the wedding of a friend. Lilian told BBC that she was impressed by Ezekiel’s courage.

“As soon as he saw me, he asked for my phone number. I told myself that this was the real man,” she said.

The couple admits their three-year love journey has not been smooth as they faced many hurdles including Ezekiel’s family pressuring him to ditch Lilian due to her height.

“They used to say I'm too tall, and I'm too old to beat him,” said Lilian.

Lilian is an Anglican evangelist in Baringo while Ezekiel is a businessman. She dismissed claims by social media users that she agreed to marry a man shorter than her because he is rich.

“If we had a lot of money, we would be on honeymoon in Dubai or Maasai Mara. But we are only here at home,” she said.

She revealed that her love for Ezekiel is based on his character and the way he treats her, adding that she respects him as the head of their family.

“It is very difficult for Mwangi to get angry, he has a good personality, he is a person I have no problem living with. And he loves me so much,” she said.“He calls me' baby even though I'm taller than him.”

“From time to time we quarrel just like any other couple. But he is gentle, and he has taught me to apologize.”

Ezekiel’s family finally accepted his wife and even attended their wedding but the couple says they lost some of their best friends.

“Some insulted me, saying unkind things to me. Some said I should look for someone as tall as me,” says Lilian.

The two said they were forced to make a special bed and order a special mattress from the factory because of Lilian's height. Their plan is to have two or three children.

No wife beating here.Congrats 3 feet is that not a primary school child height.

May your love last for ever. Sounds like a good match. Show those rainy day friends what true love is.
I envy you.

Give the guy some credit he’s not 3 ft. At 3ft he’d be a midget’s midget. And she’s obviously not over 7ft tall.

The author or authors of this article may need good grade binoculars if they wear glass. If that lad is 3 feet and the lady is 7 there is no way he should seat/stand above her elbows. Put that guy x2 and see if his double height of 6foot is below the woman 7 foot frame. Some exaggerated information is what makes real news to become really fake news literally. Finally love is blind!!!

Okay, the reporter wants to make a point on the height issue but you can see the man is at least 4 ft, almost 5 ft. God bless this couple, they saw in each other what others did not see. They will have kids with average height - 6 FT !!

The other day we got entertained with a guy marrying a toy doll!

Here is a real marriage and someone wants others out of this couples business to air their dirty views!

It is of any body’s business the difference in height! Let the couple be and enjoy their union as they settle into the familyhood! Full stop and end of cheap talk!

What business does the guy’s family members got to do with this man loving and marrying a taller woman? Our African families sometimes tend to poke their noses in the wrong places!

You got no business meddling in your short man’s life. He made his choice for a wife and that is all that counts! Nobody should talk I’ll about the new wife. She is happy and the man is happy! Give him a break and stay clear from his new family.

There is nothing to discuss here! Love is simply love and there are no issues with who is taller than the other between the two. Best of everything good and many blessings as you begin your new life as a couple! That is all that matters!!