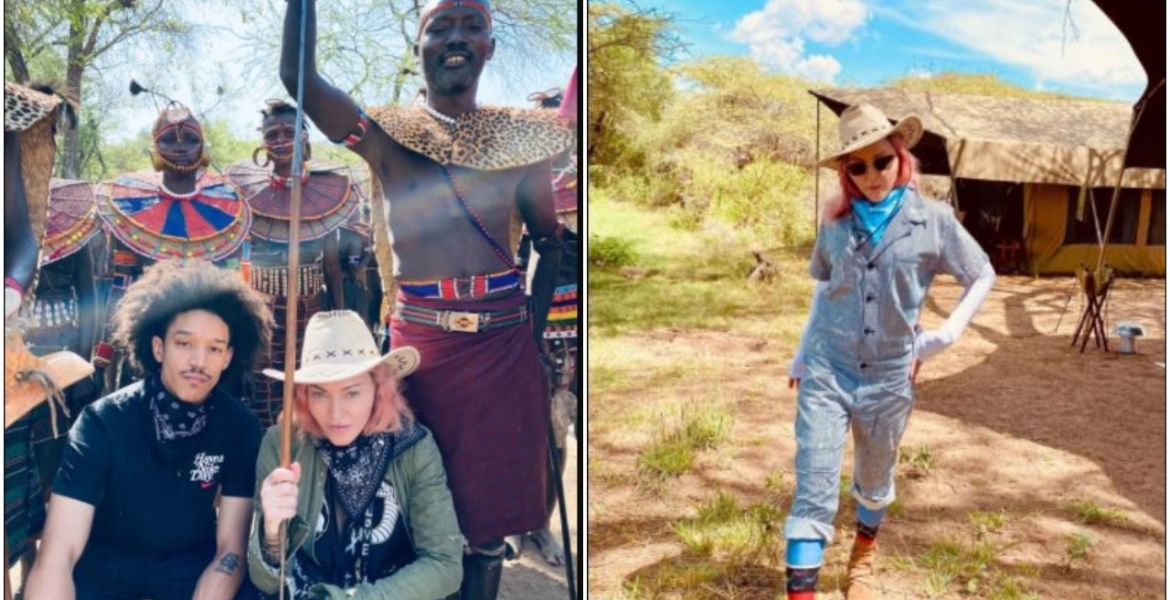 Celebrated American artist Madonna is currently on a tour in Kenya.

The “Queen of Pop” landed in the country over the weekend and proceeded to Baringo and Samburu counties where she has been mingling with the local communities.

The 62-year-old singer has been sharing a series of photos and videos of her adventure in the country through Instagram where she has a following of 15 million.

“Spending time with the Samburu tribe is always an honor. They are nomadic warriors and here the men are singing, dancing, and telling stories to attract the attention of the females,” she wrote.

In a separate post, she noted: “Visiting the Pokot Tribe in the Baringo Valley was a special moment for all of us. They invited us to dance with them and shared their daily prayer of thanks.”

Madonna who is regarded as one of the most influential figures in popular culture arrived in Nairobi on Saturday from Malawi where she was on a charity tour.

She is in the company of her 26-year-old boyfriend Alhamalik and adopted children David Banda (15), Mercy James (14), and eight-year-old twins, Stella and Estere.

The Grammy award-winning star made a similar visit to Kenya in 2016.

Ain't that some bullshit?

Madonna 62,with a 26 year old boyfriend. He's getting paid to hit the shit, man

@ ex diasporan, the reason you dont see alot of that around,especially in Africa is because not many rich and famous women are around...
Besides that, what is the difference between a 62 year old man with a 25 year old lady? Economic muscle is the underlying commonality that these oldies that attract youths have. So if you want to have afling with ayoung thing,HAVE WEALTH. The trade is between youth,and wealth. Note that I did not say wealth,and sex.

@ex diasporan’s gal was 72 years old rich lady! They walked the streets kissing and holding hands. After he took the money from her and attempted to run, she got him deported back to Kenya! He is an expert is dating old monied something!

I read on the internet he was here to adopt Uhuru. is this true?

She’s only 62. I thought she’d be older than that. She should’ve left her youngin boyfriend at him. The samburu boys would’ve gladly gave her a good pipe game. I’m just saying.

Don’t lie! That is where your whole heart is! You sound bitter because she is out of your reach! Keep your corner store job!

I cant imagine dating a 62 year old woman and am older than Ahlmahlik.

Anyway who am I to care.

She is keeping the necessary play toy within reach! And he is keeping her for the bank account! She is tired using those korokoro machines down yonder!