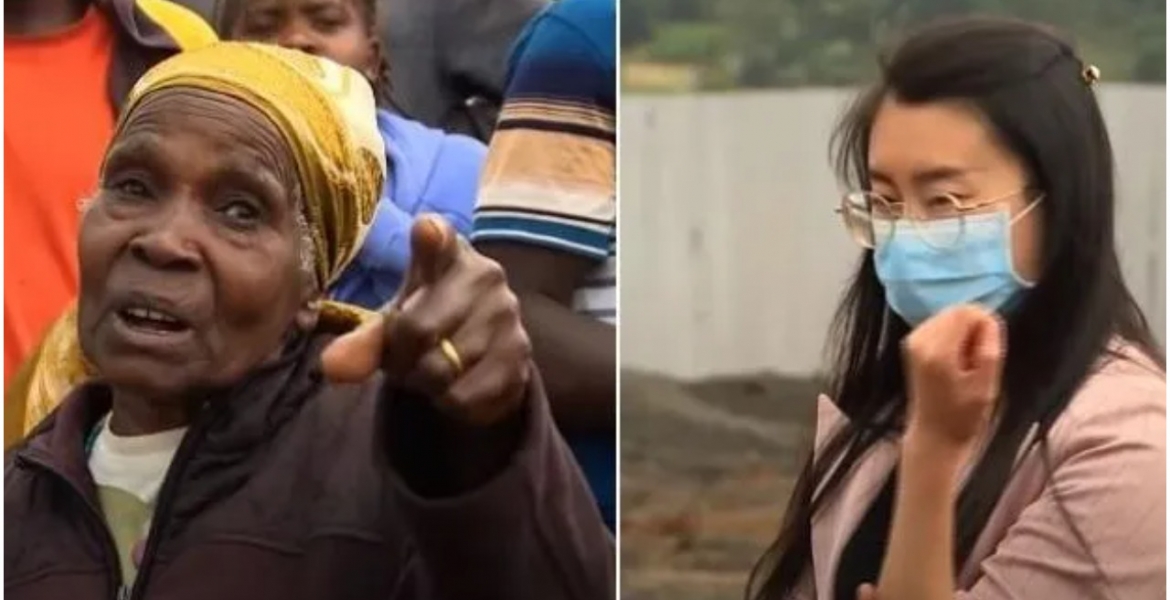 A video of a Kenyan granny threatening to beat up a young Chinese woman has gone viral, exciting Kenyans on social media.

In the video by a vernacular TV station, a seemingly furious Jane Nyambura threatens to give the Chinese lady a beating.

The 75-year-old granny’s anger was as a result of delayed compensation for her land that was compulsorily acquired by the government to pave the way for the construction of Kariminu Dam in Gatundu North, Kiambu County.

“Please warn that girl for me because so help me God I will beat her up,” Nyambura repeatedly says in Kikuyu while pointing at the Chinese lady.

The Chinese woman works for the Chinese company that won the contract for the construction of the dam.

Reports indicate Nyambura is supposed to get a compensation amounting to Sh3 million for her parcel of land but is yet to receive the payment over seven months later.

She recently stormed the construction site in the company of her sons and other villagers, demanding the delayed payment.

“We have been taken for granted because they always postpone the payments every time we ask. They told us to produce legal documents which we did but nothing was forthcoming,” said one of Nyambura’s sons.

It took the intervention of area Chief and other government officials to calm the angry residents who were promised they will get payments in a week.

“I was extremely angry because I had not been paid. Now that I have been assured that the money will be paid soon I have no reason to remain angry,” Nyambura said after government officials assured her of prompt payment.

The Chinese are also in bed with NEMA which has let them get away with digging very deep quarries and abandoning them all over the Mt.Kenya region.

Children will fall in those holes. The Chinese must go back to China and NEMA needs to be held accountable for any deaths that will result in people falling in those deep quarries.

Nyambura's theatrics may excite some,but Iam not amused.After reading the article,i truly dont see why her anger is directed at the chinese lady,other than she being of chinese descent ,and by extension working for the contract...
We should caution ourselves from such reckless threats lest we fall victims.People of color should know this better.It probably was a"payback opportunity" noting how some chinese have treated some kenyan employees.But surely as acivilized society,we should refrain from such acts.My two cents.

Do not take Kenyan's for granted!!
Our forefathers protected their resources with blood.
Fulfill your promises. Kenyan's are not stupid.
Pay up your debts or give back the land.!!!

The bad guys here is the government. That’s who’s supposed to compensate her. I don’t blame grandma I’d hit a b*#%h too. I can’t stand how the China man has taken over all the infrastructure construction in Kenya. I once made love to Chinese woman and it great. Pinocchio was lying that day. I still dislike their people...very insensitive group of people.

I thought you said the other day you love some big black and beautiful chics bigger than Brenda in size! Now you are sucking the meatless chinese chics? You dirty dog!

You can get it too.

The people who owned the big tracks of land with money have already been paid.
But the poor mwanainchi is still waiting.
REVOLUTION. We need a government for the people, not for the chosen few.

It is not in the best interest of the Chinese to be seen by Kenyans working on projects involving land where people have not been compensated unless they do not care about the poor Kenyan. And we know they actually don't. Chinese should be more sensitive to these issues or they will find more Africans against them. This cucu took the right step to pressure the Chinese and this reached the ears of relevant authorities who are nothing but hyenas taking advantage of their own.

Chapa yeye Cucu! Sh3 million? You should have sold your land for 20 million shillings! They are taking advantage of you Cucu!

The announcer lady ought to be fired for speaking half kikuyu, half luo, half Meru, and half English on a kikuyu kikuyu vernacular TV! She wants to sound like the Biverly of London!

How does anyone start digging or constructing anything on even an inch of her land before she is fully compensated?. The government need laws to protect the mwananchi.
If no such laws, the wananchi must protect themselves.
The Moabites (Chinese) need to respect the black nation. The black nation is awake!!
The blood of our MauMau is still flowing in our veins.
Let the Chinese trend carefully on any issues of land!!!

I understand her frustrations but the Chinese lady has nothing nothing to do with her compensation, ignorance is no defense.