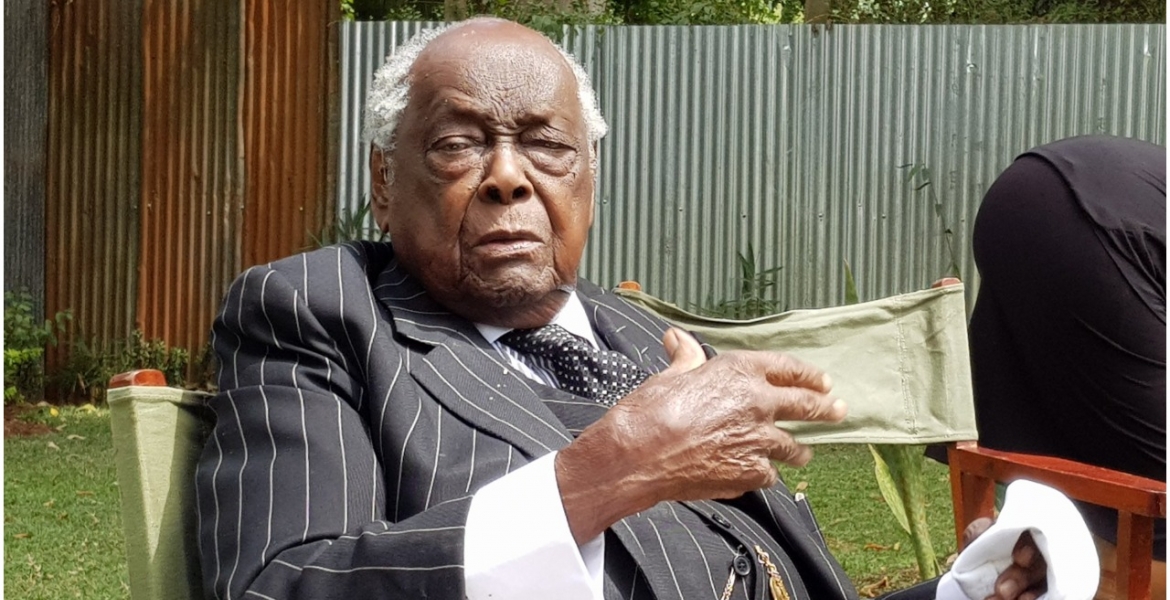 “The Duke of Kabeteshire”, as he is popularly known, was born on January 23rd, 1920, and is the last living member of Kenya's first post-independence Cabinet.

He was appointed as the attorney-general by first President Jomo Kenyatta in 1963 to replace A.M.F Webb.

Njonjo, a son of colonial paramount chief Josiah Njonjo, served in both President Kenyatta and Daniel Arap Moi’s administrations as the AG and Minister for Constitutional Affairs respectively.

Despite his old age, the centenarian has maintained physical fitness and still drives himself around.

In a past interview, the former Kikuyu Constituency MP mentioned diet and physical exercise as some of the secrets to living a longer life.

"I’m also careful about what I eat; I don’t eat nyama choma, I eat a lot of veggies."

The father of three also disclosed that he married at the age of 52 because he was a busy man and did not have time for women.

Njonjo has invested heavily in banking, insurance, aviation, hospitality, ranching, large-scale farming, property, and real estate. He is said to be one of the richest persons in the country.

Kenyans are sending birthday wishes to him through social media.

Another secret to long life is quit politics

Mugane’s father,Njonjo Mugane used to drive himself(KMS 999-Datsun 1600 SSS) to the last day of his life-more than 100.His mother died later with 100+ years.Wauuaji Kamau,Moi and Ntimama whose favorite meal was human meat died at 90s.Feeding on Chomahas nothing to do with age/death.Mugane should explain why he prosecuted his rural neighbor,Njenga Njoroge for killing Mboya without declaring his interest.Their fathers might have been fighting for land boundaries.

This kind of hate will only ruin your happiness in life.Just work hard and leave judgement to God

Useless. Good riddance. Good for nothing. Selfish he was. The kind of leaders who achieved just enough for themselves. Like Michael Jackson, the kind of Kenyans who deny their identity and heritage. A one hundred percent Kikuyu who was among the first Kenyans to be brain-washed by colonialists to think like Britons, wear like Britons, mimic white culture. behave like Britons: imagine an African deeply engrossed in a white man culture and way of life, just because he married a mzungu. He never had a Kenyan friend or associates, just wazungus and wazungus only. That is why white people belief African have very low IQ. Njonjo has nothing he can be remembered for except being the Lord of Kabeteshire. I usually pity Kenyans in the US who adopt an American ascent especially when they are in a Kenyan gathering. Why not use it when your are with Americans. The thing is, you make it worse when you do so. Why? Because they know who you are and how they expect to you speak. I have got used to speaking like a Kenyan, but the only time they understand my ascent is when they need help at the place of work. All those comments about "said it again!" what did you say?" Excuse me?" diminished as years went by. Now they got to understand me because as their boss, they know I could fire. Back to this old dude, he knows he became irrelevant in the 70s, so he has to keep on seeking attention every other, time. Bure kabisa

Swimming 50x daily or not even eating meat or going to the gym is to me not really the reason why ones live longer.Yes it me helps your body to remain fit but all I can say without no doubt is God is the ones who gives many years to live.Why am I saying that it’s because I know many who exercise daily/don’t eat meat but they die young some from blood clots/heart attack or even accidents on the roads so to me is that favour from God.

You are giving yourself excuses to eat excessive nyama choma and beer which we all know is bad for you and will cut your life short. Stay healthy my friend.

Lots of Kenyans live carelessly. Lots of beer, choma and French fries.... Their BMI says it all. They exercise little.... Live in congested areas, like Kayole, and no trees, lots of pollution... Sukuma is grown with sewage water... It's any wonder a Nairobians lifespan can't be more than 60 years

You got it there right. I have echoing the same phrace but got in trouble. Kenyans are all thieves, have all the qualities, potentiality, and an urge to steal, even when not provoked. It is just that they have never been caught, and that's is why we have a different breed of new thieves, never been heard before, every other day.

Mjuaji, I'd rather have Sir Njonjo with British mannerisms or Kenyan American with American mannerisms than have a Kenyan with a thieving mannerisms. Kenyans are all thieves. If you see one who is not, he's looking for a place he can steal

@Mjuaji u hit yet nail on its head kabisa.Jojo was a useless he-goat.Colonialism mentality he was n as u said many of us r ready to leak white man ass.We still worship their God/wr don’t believe in ourselves as black people.We want to b heard speaking Stupid English so we can look flesh or educated.When I lived in slavery usa my Fred’s will come to my house n hear me communicating gikuyu to my kids n they will foolishly brainwashed tells me that my kids will b behind in school juu am mixing them by teaching them gikuyu??Thats is how brainwashed we the Africans r n that is who jojo was.N ones u loose yr identity ur like sewage flowing daily on the toilet pipes.

niwauga ma hau, njonjo father being a paramount chief means he was collaborating with the colonizers and therefore killed maumaus to please his masters. Kenyatta a collaborater himself married a mzungu like njonjo as a symbol of being like his masters. Bure bure bure sisi zote that all we do is complain on forums like this

You only live to such ripe full-age by the grace of God, Nothing else.

Live your life the only way you can be happy Kenya is a man eat man society . we now think our choices are 'Raila, ruto , mudavadi, kalonzo what are we doing to our children ? live a life we have lived why did we go to USA, britain, germany name it to escape poverty we should be campaigning to remove these old dogs who will take us to nowhere if backwards . shame on us no them.Njonjo is a special case . he is a muthungu muiru but he lived his life but am sure he does not know 100% when he was exactly born