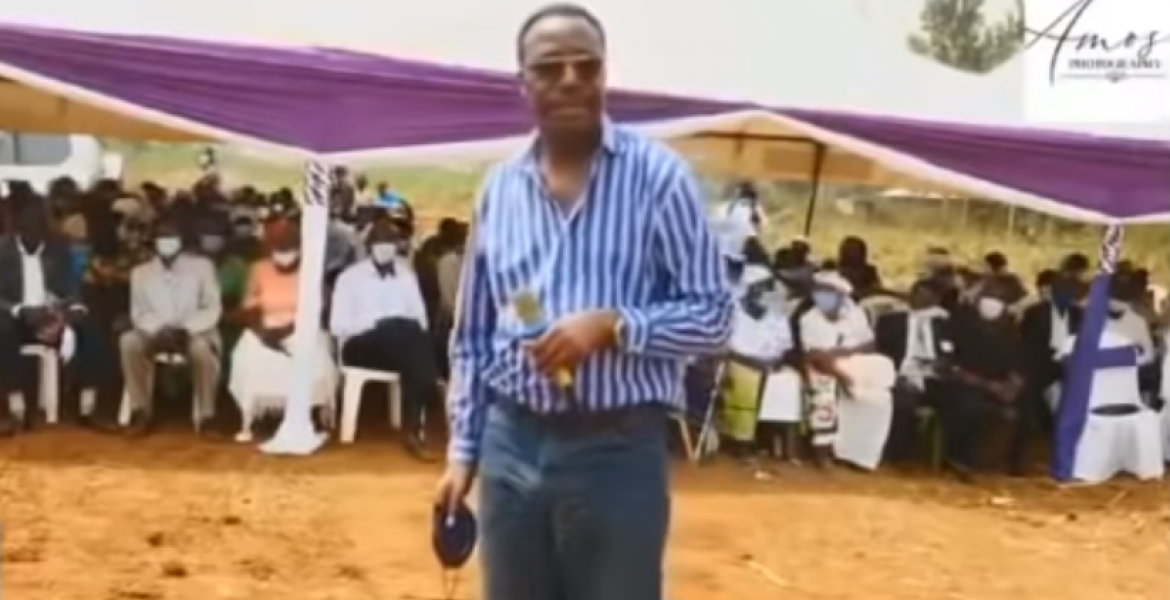 A video of a visibly drunk Supreme Court judge Smokin Wanjala bragging to villagers about his impressive academic credentials has emerged on social media.

The judge is heard telling mourners in a funeral that he attended some of the best universities in the world including Columbia University in the US, and that he is fluent in English.

“I am well learned. I went to university and attained a degree. I also undertook my master's at Columbia University. I learned English and I am a fluent speaker,” Wanjala says in a hazy speech.

He was speaking during the funeral ceremony of retired Justice Lawrence Peter Ouna in Busia County last week.

Before joining the judiciary, Wanjala worked as a senior law lecturer at the University of Nairobi for 20 years.

He is accomplished and comfortable. So, there is nothing wrong with being drunk.

These are the people making the most important decisions for Kenya. This is the dude who made Kenyans use billions of shillings in repeat election because "he and cartoon maraga" saw irregularities.
I have no problem with any Kenyan drinking busaa/changaa or muratina at their leisure time/home/in bed but please do not show up at the burial of a colleague - You disrespect the family and the court. I can bet that was your state when you ruled on presidential election. If you cannot be sober (at matanga for 5 mins.) how on earth do you sit at SCK? But you have company at high places- and so it's oooh right.

Damn!! I'm sure he will say he was misquoted or taken out of context. It's ok to drink in moderation but he needs an intervention. Jamaa can barely stand let alone talk. Kwani he has no friends or family to stop him from doing dumb stuff?

@ Mundumugo, yeap,if the video generates a backlash, that will be his defense.
Ithought conduct,and image should count for something,especially from our so called leaders?
Anyway, I wonder if he was out to embarrass a"rival". same way Kalonzo did to Muthama-again at a funeral.
Sadly it appears that our leaders are throwing decorum with reckless abundance when at funerals.This should stop.

Only a judge will prescribe rehab for the Smokin drunk

I have no problem with him appearing drunk at a funeral. Though he should not do the same at SCoK

So its OK for him to drink so long as he does not appear drunk at SCoK?

Being fluent in a foreign language is a pride in Kenya. Reading dictionary hunting for the next big word is a plus. In fact most devout Christians in kenya study Oxford English dictionary more than Kjv.

A very insecure judge indeed! Why go bragging to the lowest in the society while inebriated with the toxic brew?

And these are the yahoos the ordinary folks are supposed to emulate and look up to time to time!

No wonder the youth in Kenya have lost a sense of direction because the men out there in the community can’t even offer any positive advice! Wanjala should resign!!!

He has a massive chip on his shoulder, clearly emerging when he is drunk! It all started when he was baptised "smokin" without a "g".....with a name like that, who can blame him for having an over inflated, smoking ego? Pili, where were his peers or elders at that funeral? The people who allowed him to go on like he was and giggling and recording like school girls are more disrespectful of the dead and his kin, in my view. Our MILA has gone with the wind!

Kwendeni huko. This is totally in order in that culture...I should know because they are extended relatives. If you understand the language, you'd know what he was saying...just mourning his uncle and friend.

Leave Smokin' to continue smokin' whatever he smokes.

Haha too funny. He drunk too much of grandpa’s cough medicine.

Nothing funny about watching an alcoholic embarrass himself in public. He needs to be investigated if he goes to work drunk

He works once every 5 years. Only when there is presidential petition