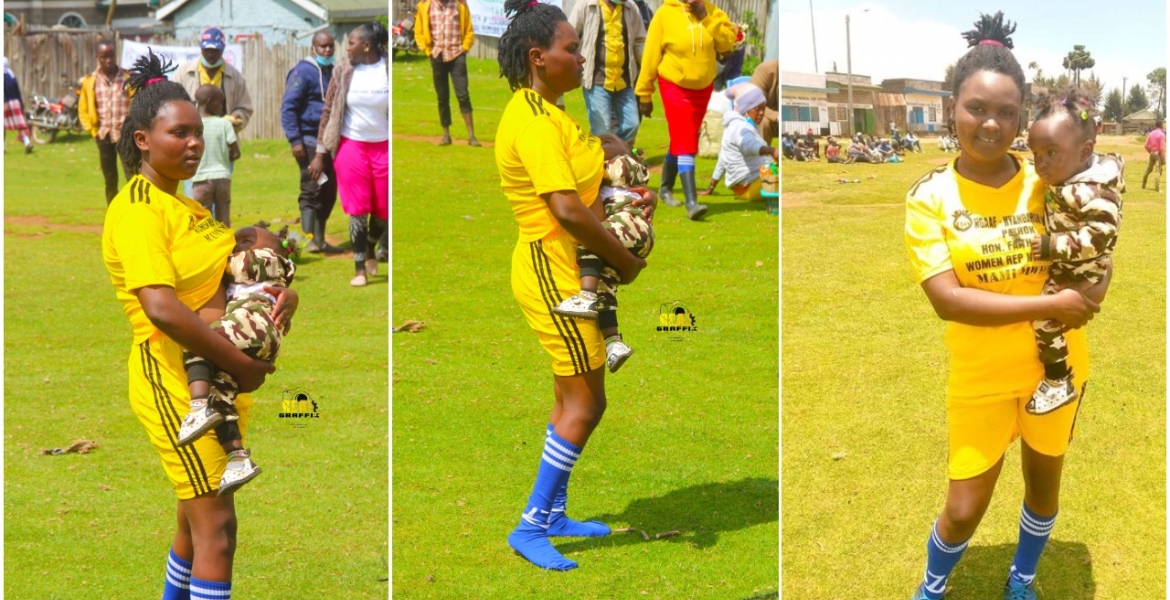 Well-wishers have rallied to the aid of a woman who wowed Kenyans after a photo showing breastfeeding her baby during a football fixture went viral on social media.

The picture was taken during a football tournament organized by Nyandarua Woman Representative Faith Gitau to mark International Women’s Day on March 8th.

During halftime of the match between Njambini Women and Karangatha Women, 23-year-old Winnie Wangui Kamau, a single mother, was pictured breastfeeding her daughter.

When her photo emerged online, sports commentator and media personality Carol Radull embarked on a mission to find her.

Wangui told Radull that she lives with her grandmother after the father of her child took off.

Radull and several other well-wishers, including officials from Rware United FC, Kabu Simon of Bonfire Adventures, and Expeditions Maasai Safaris will be visiting Wangui and her kid next week to offer them support.

Cash donations can be sent directly to Wangui through her MPesa number 0759685298.

Why are some people reacting like breast feeding a baby is something novel?I dont understand why its getting this attention.Is it because its at afootball field,apublic place? Even so, whats the problem with breast feeding a baby anywhere.
Do we really ever stop to think about where we get this kind of behaviors?We should. Not lot along ago in most parts of the world particularly in Africa this kind of act would not raise an eye brow .Why now?

You get that kind of behavior from Fida! Is that a good answer! Everything is wrong to include feeding a hungry child!

@ Nancy, next will see someone making abid deal out of a women changing dipper in public...I am sure all mothers know how uncomfortable it is for a hungry child,much less an adult.

There is nothing Strange about Breastfeeding in Public (except to Feminists and Westerners). So cut the 15 mins of FameCrap.

I breastfed mine until Ile age Wa diaspora wanasoma heeeeeee🙄🙄. I kept telling them you go ask your mom how long you maneuvered on her chest looking for your food... Its funny how Africans have started this kind of stupidity. Si then all trophy cash airing of such should go to our mothers... They did this long before us aki...

This is the best mother in Kenya today! She never forgot why God blessed her with a beautiful child! Both the mother and the baby are so proud of each other! When it is time to feed (eat), everything else stops - even a good game of a soccer match! I’m proud of this mother!