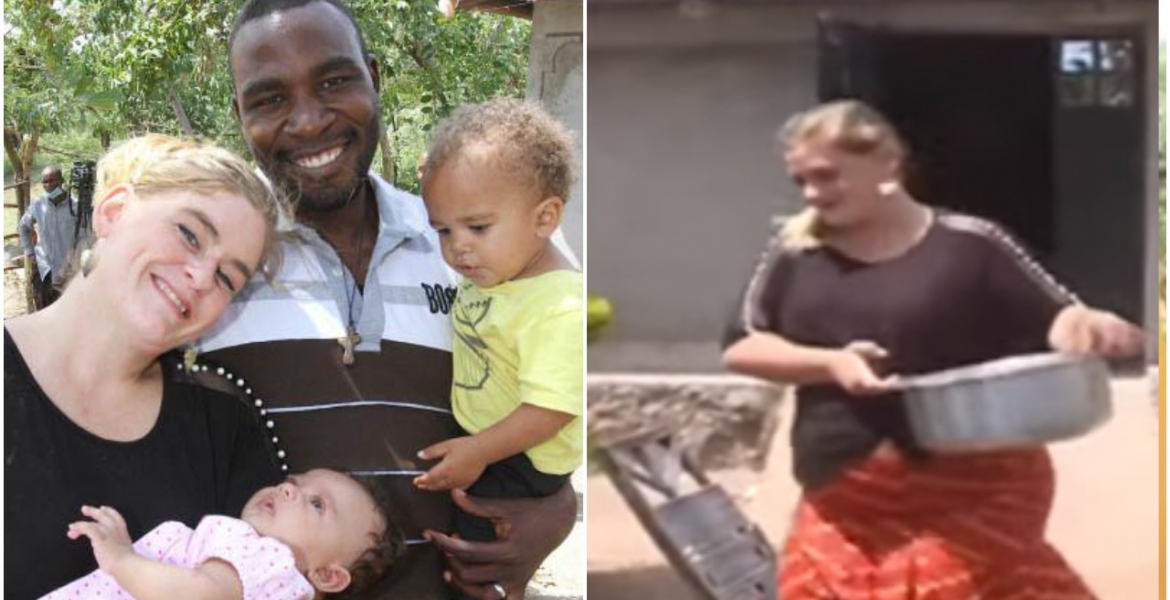 35-year-old American Carey Joy, a missionary, came to Kenya in June 2018 to spread the word of God but ended up meeting the love of her life, Albert Wanyonyi, a 28-year-old boda boda rider from Bumula, Bungoma County.

Wanyonyi, who has since adopted his wife’s name and prefers to be called Albert Joy, fell in love with Carey when he saw her for the first time in a church started in 2017 in his village with the help of her parents.

But the Class Two school dropout could not immediately approach Carey due to language barrier as he only spoke his native Bukusu language. It took him three months to express his love to her.

“But it was hard to express my feelings for her due to the language barrier. I could not speak Kiswahili or English and she did not understand our Bukusu dialect,” Wanyonyi tells The Standard.

Carey says God spoke to her and told her that Wanyonyi would be her future husband, adding that God enabled him to speak English after prayers.

“God spoke to me while praying and told me Albert would be my future husband. I did not know that would happen. He could not speak English and I could not attempt speaking Kiswahili or Bukusu languages,” she said.

“I was shocked to hear him speak English after the prayers; he even brought me flowers and that is when I knew God had kept his word.”

Wanyonyi echoed his wife’s story: “When I told her ‘I love you, she appeared shocked and excited at the same time. She embraced me and confided that it was something she had been waiting for.”

“She used to give me a ride in her car almost every day and I wanted to tell her how hard I had fallen in love with her.”

The two tied the knot at a little chapel in Bumula on October 27th, 2018, and have since been living together as husband and wife in the village.

“We lived in a one-bedroom mud-walled house, there was no electricity and good amenities like I was used to in California, but I am used to a simple life,” Carey says.

The couple acquired a second motorbike on loan to bring in extra cash and are planning to venture into poultry farming to complement their income.

Carey spends her time learning how to prepare local dishes such as ugali with chicken.

She adds: “I have learned several Bukusu words and I can comfortably interact with people, especially women, although many are shy to visit my home because they cannot speak English.”

Illiterate? He is lesser learned but not illiterate

Can the Keroche family learn something from this relationship?

This story is so moving,true love here,nothing is impossible with God.

And many black women in Kenya have married illiterate Kenyan boda boda men , why is this a story, our Media and elevating white women - the Karens who are harassing black men here in USA. Ugh !

Exactly. This Karen would be a low life back where she came from. Ati missionary work...yes between the sheets. Same "missionary work" that stole our land. There will be more and more coming to Africa to look for a husband soon.

Love knows no boundaries. Wishing them the best. Hiyo headline is offensive.. and why is this news? Why do we still dance around white people. She is a human being who fell in love tosha.

I the skeptic always take issues with people who claim God talked to them,or told them to do this or that. How come they only invoke God when the"going is good". Iam sure we have heard cases of marriages made in heaven,only to find out that they were actually made in hell. Why dont we hear or read cases like that of Ibraham who was told to sacrifice is son,but the son was rescues at the last minute... I magine such a story today.The "perpetrator" would be deemed as mentally unsteady,and apprehended before lifting the ax.
Anyway, I wish them the best in their union.Yes no one except the two can shape their destiny.However, any relationship built on too many "dissimilarities" pose a risky foundation.I do not include race in my"dissimilarities" though some might see it as a concern...
As for women marrying down, admittedly,its rare,but this is due to our socialization.But Isee nothing wrong so long as none of the parties is exploiting the other.None the less,marriages tend to be a trade off.Meaning, love alone cannot sustain a marriage.Financial muscle does alot of lifting the heavy load that crumbles many marriages.Thus the popular saying particulary from our african american sisters,"Love doesn't pay the bills".My two cents.

Halafu, but she sold her car too and her meagre belongings to serve the Lord in Africa ha ha ha , while poverty, drugs etc is rampant in CA where she was born, she couldn't help there? These are useless wazungus looking for therapy in Africa . I want to see this marriage 20 years from now and I shall be a believer then. I bet she will start a non profit that will be crowdfunded and donations from CA Christians and she will not be living in those quarters soon. Watch and learn

This is news bec Githeri media and the govt bigwigs and elected officials treat boda like trash like a vice yet it is the number 1 job now. Govt didn't care to regulate and provide biking school for safety reasons.
Slay queens (no money no love retards) should learn from this God authored marriage. Marriage is not a biz but relationship.

Are we elevating "Karen's" above our own people?
"Karen's have caused death and havoc to our black brothers and sisters in the US by calling police on them over nothing.
Kenyans need to learn about the ugly history of our people under the so called "Esau and Karens"!!

I really need man who is committed serious and ready to settle. Am very hand working ni mambo na kuelewana. I wish then all the best. Email me teresa.lea@aol.com

Anonymous :the Karens have enabled many Kenyans to get a green card. Some respect to them, please

Congrats! Love whom your heart has chosen regardless of others opinions, after all its you who gets to live with the love of your life none others with their useless words ... Pilipili usioila...