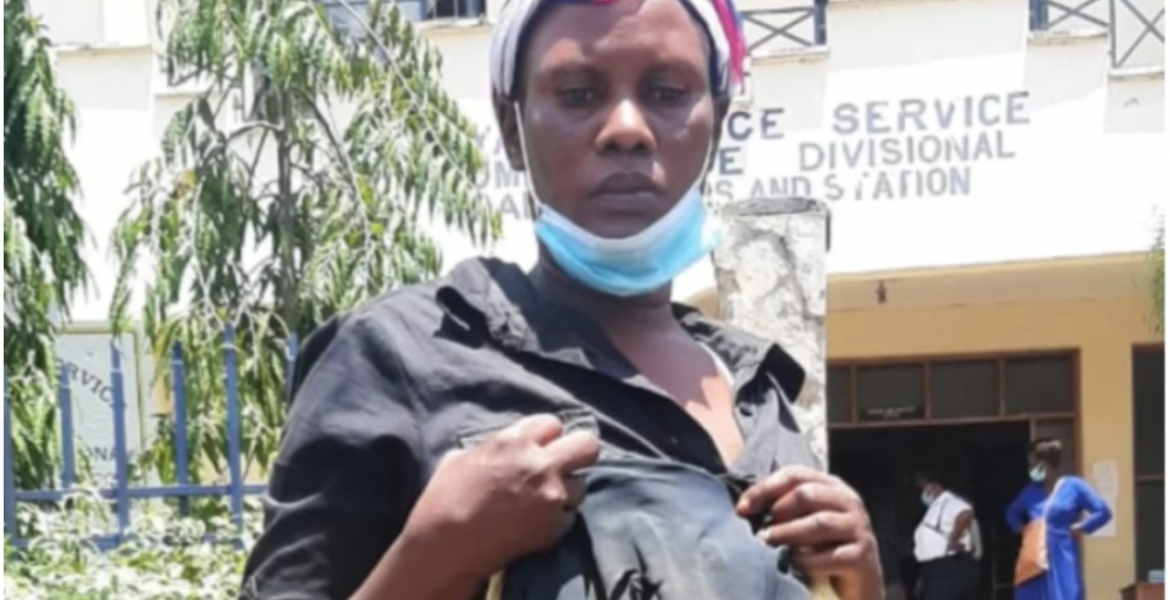 Kenyans are calling for the arrest and prosecution of Kisumu County government askaris who were caught on camera dragging a woman on the road.

A video shared on social media shows a speeding white pickup truck dragging the lady by her legs along a tarmac road in Kisumu.

Rogue Kisumu County askaris dragging a woman hawker on the tarmac with their vehicle. The impunity that this County Government has is on another level. And instead of taking the injured to hospital, they are rushing to Central Police Station to have the culprit detained. pic.twitter.com/iU4SmyiTw4

Some boda-boda riders are seen following the vehicle in an attempt to save the woman but the driver does not stop.

The woman, who has since been identified as 38-year-old Beatrice Magolo, sustained injuries during the incident that has sparked public outrage.

In an interview with local media, Beatrice said she was selling her products near the Kisumu Bus Park when a group of kanjo askaris ambushed her.

The officers hastily tried to bundle her onto the back of the vehicle but she resisted, leading to a scuffle that drew the attention of fellow hawkers and boda-boad operators. The driver of the truck abruptly sped off for fear of being attacked by mob.

“One of the kanjo askaris firmly held my right arm, causing me to hang from the truck with my legs on the tarmac road,” the single mother said.

“Governor [Anyang] Nyong’o demolished our kiosks next to the bus park but did not relocate us to another place. So we have nowhere to do our businesses apart from hawking,” she added.

She was dragged along the tarmac for nearly half a kilometer before she was dropped off at the gate of Central Police Station.

Beatrice is calling for justice following the barbaric act that was condemned by Kisumu MCAs.

Even if they were recruited with D,E,and F scores,this is no reason to treat a human being like thrush.Does knowing this kind of behavior is not humane really need any education?
In so called advanced countries,with witnesses around,there is no way the public would let this inhumanity fly;let alone the police chief.What does that tell us? ...that we not only underdeveloped economically,but also socially.
Let's here from the authorities on this serious matter.Is there any wonder that some civilians unleash their frustrations on cops?I refuse to accept that this is the best Kenya can offer.

I hope Magolo’s two sons have witnessed the injustice in Orina case.They must revenge for their mother as justice from Uhuru’s useless govt is ZERO.They should visit Eastleigh for some training on how to deal with these demons.

These animals. I swear I can’t think of any more incompetent individuals than Kenyan police. I wish we’d get an inside on how they are trained. They go against everything that stands for protect, defend and serve. There’s no excuse for dragging someone like that. Policing in America is bad as it but at least when you dial 911, you know help is coming.
I once had an unpleasant encounter with the Kenyan police while visiting Kenyan. While walking in the streets of Nairobi, they pulled me aside and wanted to know the contents of my backpack. I refused. After sensing I’m from America, these pigs’ eyes lite up. Forked out a lot of cash just to be fled.

Mob justice is required for such case.

Sue them big momma. Sue them and get yourself set foe life. And this men who have no respect for a woman hopefully the face the justice system