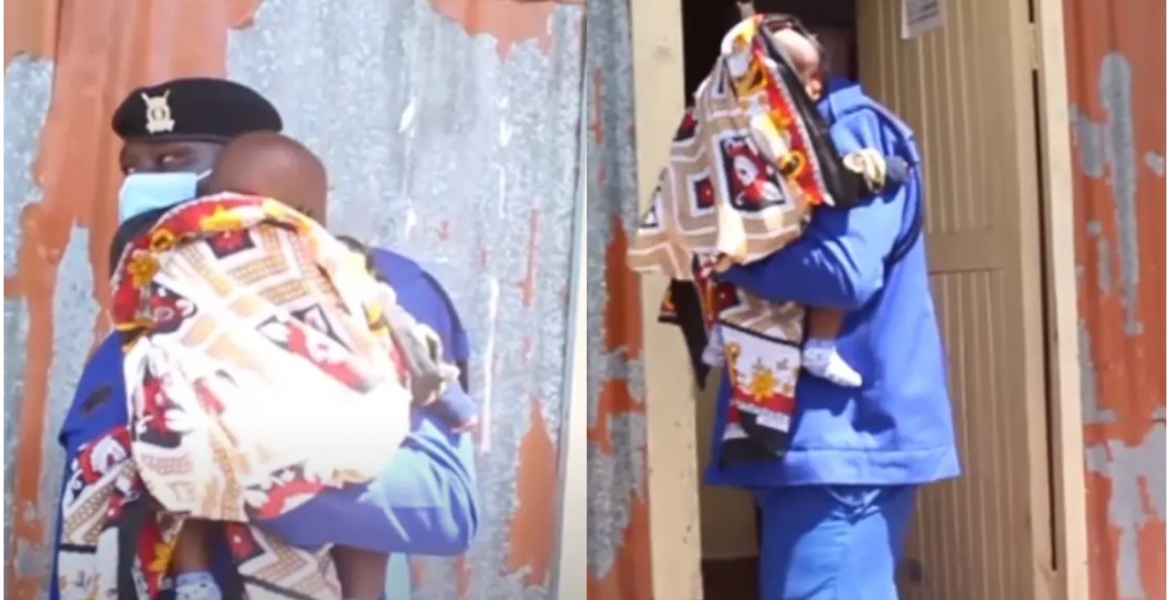 A policeman in Nairobi’s Ruai area has earned praise after he offered to babysit for a schoolgirl who is currently taking her Kenya Certificate of Primary Education (KCPE) exam.

The officer, who declined to be named or to comment on camera, has been taking care of Alice Milito’s child as she writes her examination at Ruai Quest for Happiness School.

He told a local TV station that was only doing what was right after realizing that the student was struggling to write her exams and at the same time look after the kid.

The school’s principal Tabitha K Mbaiya said Milito was rescued from early marriage during the period when schools remained closed last year due to the COVID-19 pandemic.

“She is a Maasai girl, we saved her from early marriage…when she went, she became pregnant,” said Mbaiya.

She added: “He [the officer] has been picking the baby, he has been carrying the baby when the mother is sitting for her exams. And this is raising the esteem of this girl.”

A video by a local TV station shows the officer holding the baby in one hand and his firearm in the other hand. He is one of the officers proving security in the school during the national examination.

Wish all male relatives to disadvantaged girls and women were as helpful and empathetic as this policeman. Additionally, I wish all policemen were as helpful, considerate and humble as this exemplary officer. Asante sana afande!

Surely does this candidate not have a grandmother or aunt who can look after the baby.What about the baby daddy family no female relative available to babysit the new addition or is the policeman the baby daddy.She needs to be serious with her exams if she wants to proceed to high school.Looks like a publicity stunt to elicit support how do you leave your house knowing you are going to sit for an exam.Silence is a requirement in the examination room and babies do not know the meaning of that when they are hungry, need their diaper changed or just plain irritated furthermore invigilators will not let you into the exam room with a baby

Most likely those relatives you mentioned, are the same ones that forced her into early marriage. So, they are all useless.

Awesome. This kind of people need a gofundme

This is a man who appreciates the strength of a woman. May his doors open

With all the negative news we get about polices men,such a beating up innocent wananchi,taking bribes,and dragging a woman with a pick up, one would be hard pressed to find a silver lining in their cocktail of misdeeds,but lo and behold,one pops up in the form of a babysitter.
Afew more of these kind acts,and my faith in kenya cops will be restored.
Hey boss,please tap him for promotion.

How so @ BBIbbi?. She was married.This was a forced marriage. She was not out there playing the field. The fact she continued school despite her forced interruption speaks alot about her ambition.If anything, blame these men that ruin lives of young girls by forcing them into early marriage. I hope she does fulfill her dreams.This is the type of girl that has suffered for no fault of her own but due to retrogressing,and counter development customs of her environment.

God bless you officer! One of the few great men left! Proud of you!

Ashante Afandi.The good act reminds me of DUTSI 4 terror attack where real Kenyan police heroes ruthlessly dealt with Al Shabaab.The so-called IG(who like today’s IG was unqualified) was forced to resign after he declined to lead the rescuers as challenged by his juniors-Mbugua,Kanja and Kinoti.After that,I.e,three weeks later,Uhuru & Co.PENGENYE lovers were not even ashamed when they promoted 30 women to higher ranks they never deserved.