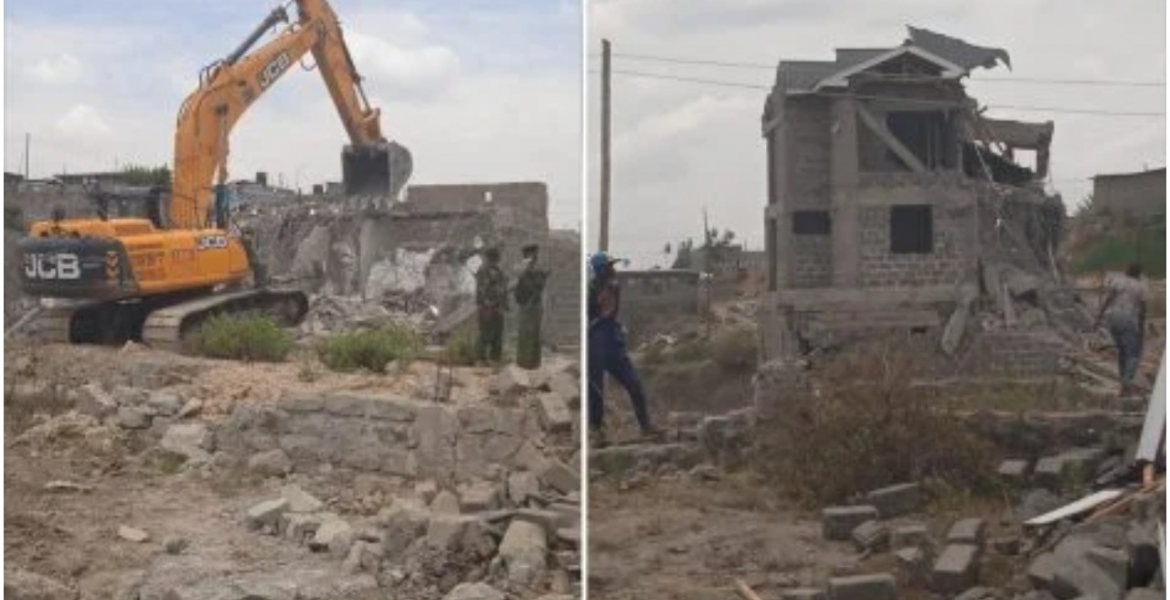 Over 5,000 people have been left homeless and counting huge losses after the government demolished their houses in Nairobi’s Njiru area.

The government says the demolitions are meant to pave the way for development projects by the Nairobi City Water and Sewerage Company.

Bulldozers were deployed to flatten the homes following the expiry of an earlier notice to residents to vacate the land. Homeowners watched helplessly as the earthmovers descended on their houses, leaving a trail of rubbles and debris as it was too late to rescue anything.

The demolished structures include complete multi-story buildings worth millions of shillings while others were at different stages of construction.

“I have been residing in Njiru since 1992 and worked hard to build a house here. I have four children and a wife to feed and now we are homeless. With the economy battered, where are we going to get an affordable house to live in?" posed Benjamin Ojwang.

Makadara MP George Aladwa condemned the inhuman demolitions, stating that the government has a responsibility of protecting the rights of its citizens.

“While I welcome all the intended development projects in our sub-county from both the county and national government, it is hard to understand the motivation behind evicting people from their homes at a time when the President has announced a cessation of movement in and out of Nairobi,” he said.

“I call on all elected and nominated leaders in Nairobi to unite against these inhumane, brutal, and untimely acts that clearly violate the rights of those we represent,” he added.

In May last year, 8,000 residents of Ruai and Kariobangi estate were left homeless after their houses were taken down as the government moved to repossess a disputed 3000-acre land to allow for the expansion of the Dandora Sewerage Treatment Plant.

When you build your house on sand otherwise known as engaging in land grabbing, questionable land deals,or bribing your way to acquire a fake title deed eventually your lies will catch up with you.Somebody laughed all the way to the bank now many are crying and left homeless was it mere greed or just plain foolishness others were just naive.When it comes to land you must trust and verify “fanya due diligence” and if the deal sounds too good to be true it probably is

If the Land was Grabbed, then the Demolition is Good riddance of Land grabbers. And even though Alaska feels "castrated" (as his Name and Words suggest), it wasN'T "too late to rescue anything." They had been Warned.

This is a case of failed government. They have allowed people to crouch on marginal lands and water catchment areas ,rivers have dried why coz cartels do deflogging forests .Kenya now we are importing maize from Uganda what a shame . All those selling plots need to be arrested and land taken up for preservation to keep our country fertile all the time . Where will our children live. Bule tu serikali kwenda huko

Duh! The goes my kaplot. Investments in this hole of a country......

I’ll never understand these land issues in Kenya. Thank God for America where citizens have a voice.

Eminent domain (the Power of the Government). You should have moved when ordered to do so.

REVOLUTION is the only key to get things back in track.

It seems as ODM’s muuaji Aladwa(who declared people shall die to install savage Raila as president) conned the demolition victims to purchase the land when he was Nairobi mayor.I also remember how six Miungiki murderers died in a deadly battle among themselves after a failed sub vision of government land in Argo River where KMC & Portland cement stand.The land had been “DONATED” by the then PM Raila as a bribe for their votes in 2012 elections.WANJINGA NA MASHAMBA.