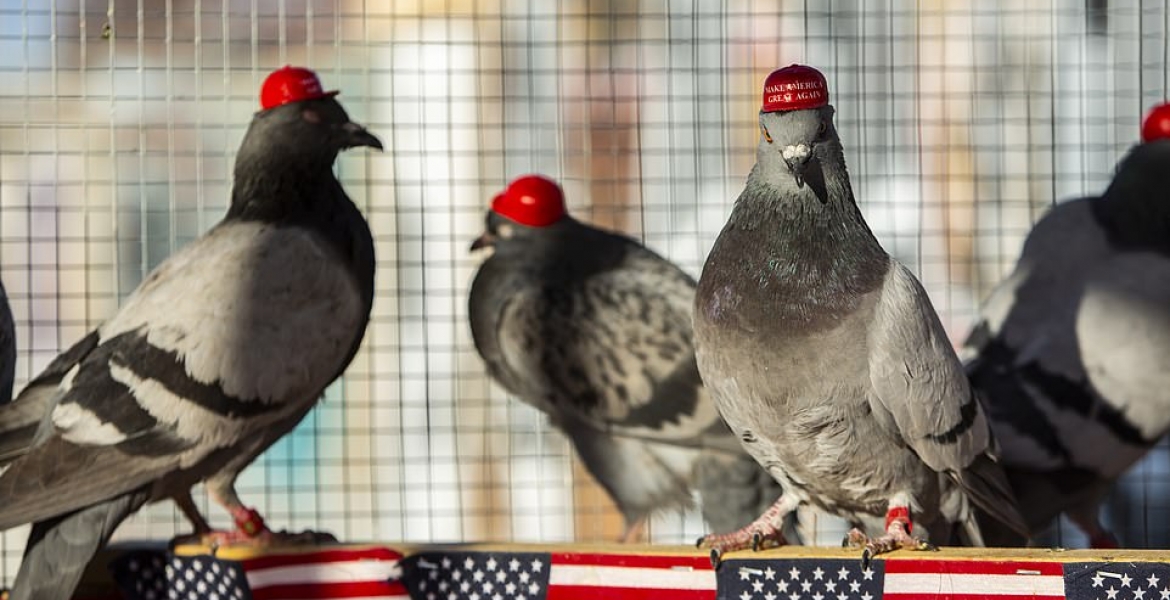 Pigeons with tiny Make American Great Again hats glued to their heads were released in downtown Las Vegas this week in what appears to be a sarcastic statement of loyalty to President Donald Trump and a mock protest of Nevada's coming Democratic presidential caucuses.

A group calling itself P.U.T.I.N., Pigeons United To Interfere Now, claimed responsibility for the stunt. The pigeons were set loose Tuesday, according to the group.

NBC affiliate KSNV spotted at least one of the pigeons still in a hat on a downtown street Wednesday afternoon.

"P.U.T.I.N. have used their pigeons to launch a one of a kind aerial protest piece in response to the arrival of the 2020 Democratic Presidential hopefuls," according to a group statement. "The release date was also coordinated to serve as a gesture of support and loyalty to President Trump."

Twenty-five pigeons were released, 24 of them wearing hats and one donning a Trump-style wig, the group said Thursday in an email to NBC News.

"Most have returned. We expect to see the rest tonight or tomorrow," the group said.
While the stunt has drawn some laughs, Mariah Hillman, who runs Lofty Hopes, a Las Vegas pigeon rescue organization, called the MAGA stunt "animal cruelty."

In December, videos of three pigeons wearing miniature red cowboy hats went viral after they were seen on Las Vegas streets.
"It started here with the press making fun of it, the police didn't do anything about it, and now it's grown into this, so when is it going to stop, and who's going to do something about it?" Hillman said Thursday.

Hillman and her volunteers are setting traps in hope of removing the pigeons' hats before rehabilitating and releasing the birds.

The pigeons are wearing the hats with the help of eyelash glue.

"It doesn't matter what kind of glue it is. It is still, in fact, cruelty, because you are impairing their vision," Hillman said, adding that her organization rescues many birds, such as wedding-release pigeons and racing pigeons, that are trained to return to their flocks.

"There's not always a guarantee that they'll return, because they can get injured or killed before that happens."

The person or people who took time to glue the hats on the birds deserve a pat on the back.I do not like what you stand for but wow it is definitely unique and you have your way with animals.Love the birds just not the message

I think it was great. And she just jealous that the Democrats did not think of it fist. Haha.....