Frustrated Nigerian Man Burns All His Academic Certificates Due to Unemployment 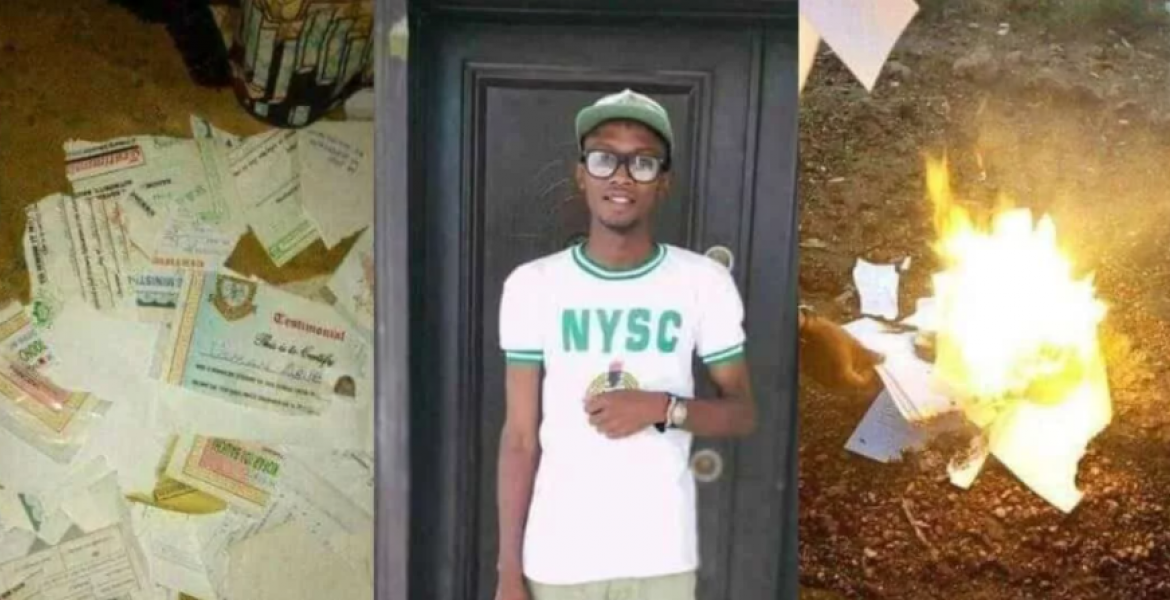 A Nigerian college graduate has caused a stir on social media after he set all his academic certificates on fire.

The man identified as Usman Abubakar, a resident of Nigeria’s state of Katsina, burned the documents after he got frustrated having failed to secure a job, according to reports.

Some of the burnt certificates were obtained from primary, secondary school, college, and National Youth Service Corps (NYSC).

Having unsuccessfully applied for many job opportunities, he saw no need to keep the academic papers and decided to turn them into ashes.

Photos of his burnt certificates went viral on social media with many terming his decision as stupid.

Onajite tweeted: “Sad one, who him do now, sad he couldn’t get job, but that action, will not get him the job, why not keep it, forget u ever graduated, face another road, mentality comes in a different form.”

Another Twitter user wrote: “Well, that is stupid. Burning them wouldn’t give him a job. Even if you are angry, two wrongs don’t make a right!”

Nigeria is one of the countries with high rates of employment on the continent and the world.

The West Africa nation’s unemployment rate as of the second quarter of 2020 stood at 27.1 percent, according to a report published by the National Bureau of Statistics. This means at least 21.7 million Nigerians remain unemployed.

I do not know the education system in Nigeria but in some countries you can get a copy of your certificates from the schools you attended.

Those certificates are not worth anyway, I don’t care whether he burned his testicles too. Tell me what degree from a Nigerian school is Useful for decent life.

Is John Wanjohi Editing Comments now? I don't see anything that I have posted, in the last day or two.

Maybe this could be a vindication to Boko Haram. As their name suggests, ' Western educational is a con. BOKO for books,school, HARAM= illegal or illegitimate

This is just another example of immaturity. I can understand the frustration but how does burning official school documents help with you getting a job? Must I remind you papers are just inanimate objects, its like you breaking your TV because your team lost a game! Now you lost twice, no job, no documents!