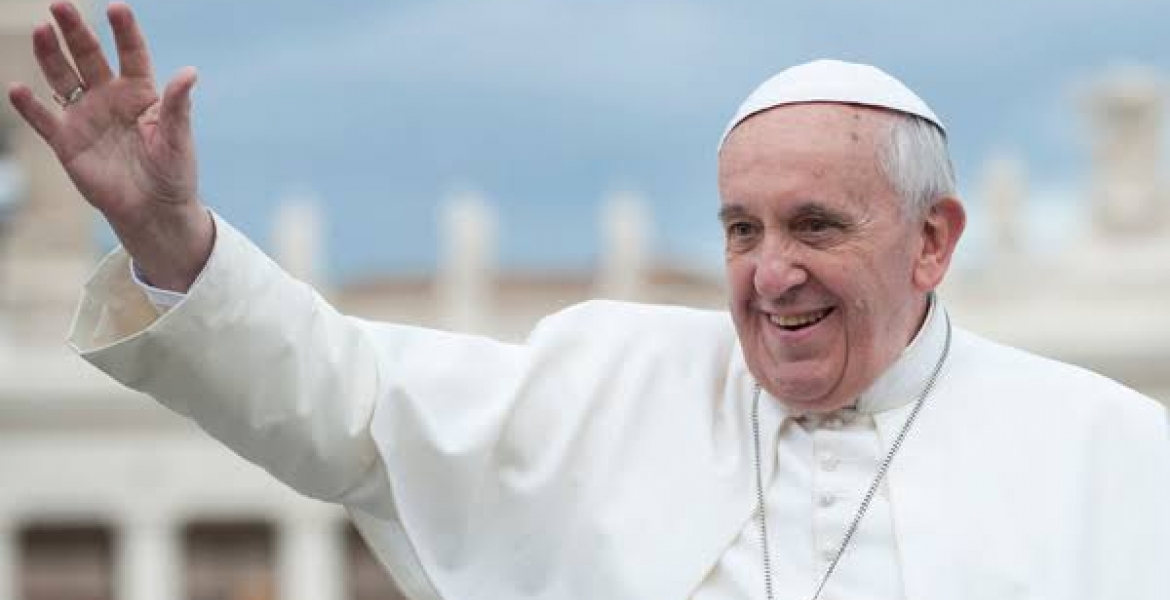 Pope Francis has expressed support for homosexuals, saying they are children of God and have a right to be in a family.

In a documentary released on Wednesday, the pontiff who is the global leader of the Roman Catholic Church, stated that homosexuals should be protected by civil union laws.

"Homosexual people have a right to be in a family. They are children of God and have a right to a family. Nobody should be thrown out or made miserable over it, " he says in a documentary  by Oscar-nominated director, Evgeny Afineevsky.

“What we have to create is a civil union law. That way they are legally covered. I stood up for that.”

He was being interviewed for the documentary “Francesco,” which premiered at the Rome Film Festival on Wednesday.

His latest comments have been described as the clearest language he has used on the rights of gay people since his election in 2013.

You shall not lie with a male as with a woman. It is an abomination. (Leviticus 18:22 NKJ)
Do not defile yourselves with any of these things; for by all these the nations are defiled, which I am casting out before you. (Leviticus 18:24 NKJ)
For the land is defiled; therefore I visit the punishment of its iniquity upon it, and the land vomits out its inhabitants. (Leviticus 18:25 NKJ). The bottom line is that this Pope is evil because he advocates homosexuality against the teaching of God. It is most likely this pope is gay, a Pedophile who most likely spent his life in Catholic monasteries molesting boys

Pope Shoga is still being worshipped by some KONDOO Kenyans who always leak musungu's mukudu.I wonder how they will continue following the Catholic religion of gays.

African people have been betrayed by christianity for a long time this the last straw,Africa needs to break relationship with christianity.

RAS Menelik,I would hate to think that SEX is the biggest contribution the Catholic Church offers.You take out this SEX thing and you find out that the Catholic Church has done a great deal in uplifting peoples well being and welfare.Lets not make sex such a big deal.

It’s the end of the world as we know it.

Saint Africaca, christianity has done nothing good for Africa from slavery to colonialism to brain washing to make us believe we are second rate humans. Look at India,China and Japan they rejected christianity and they developed faster than Africa, we accepted christianity and Islam and we are the poorest people in the universe.Christianity as a social club is ok but for morals and spiritual matters I would look elsewhere. We have been so brainwashed to even try to defend what the pope said. I would want to know how many true Africans are going to tell their children it is ok to be gay.

Homosexuals are not on acrusade to change behavior of straight people.They simply want to be treated as human beings.That is with respect.
I for one don't think that gays chose to be gay.How could they in such a hostile world?
The world would be in a much better place,if we eradicated crime, corruption,spousal,abuse,HiV,covid19 to mention a few,and bedroom matters in the bedroom.Gays are here to stay.They have always been.They are our fathers,brothers,cousins,sisters.Their sexual preference should not diminish their positive contribution.If a gay scientist discovers cure for cancer, how many heterosexual will applaud him,or her?

And these idiots will not support polygamy. Only moral decadence!
Africans, stop following their disgusting habits, return to polygamy...and everything else you were doing before the 'melaninless' imperialists stepped into our pure continenet.

@Mteja,I go where science leads me.Objective studies have shown that in every know human society,there has existed some percentage of homosexuality.Rather than deny it's existence amongst ourselves,let's open our minds, and soften our hearts.We may just learn something.As for polygamy,last time I checked,it is legal in Kenya,and dare say many parts of Africa.As for me,iam happy with one wife.If 59 will make you happy,more powers to you.I personally go by what makes sense to me irrespective of it's origin,that coupled with science are the building blocks of my character,and my principal.

You're right on freedom to marry many. But for research and science, the same imperialists control the data and information. Just like they do with media. By the way, and with due respect, how do you call a faggot in your mother tongue/ means it wasn't there before. I know they call them shoga in Swahili, but swahili is not native to our beautiful continent, again.

So @Maxiley would u support somebody who wants to sleep with a dog or cows if that’s what they want n they r happy.If yr kids grow up n Marry dogs n other boys marry boys n gals gals it seems u will be happy lot too