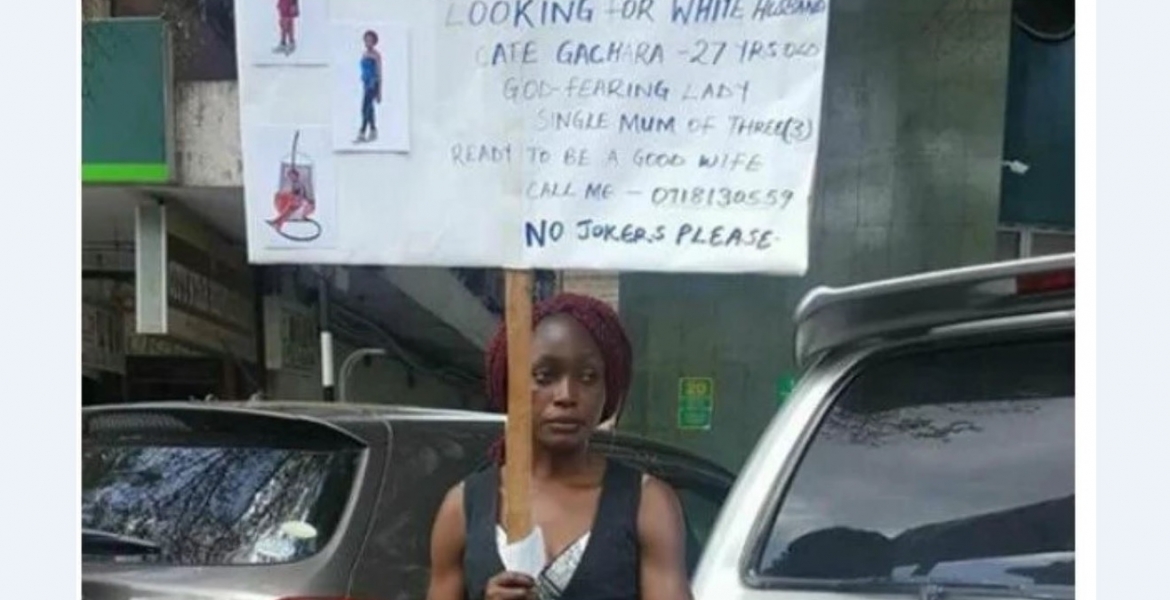 A 28 year-old Kenyan woman who took to the streets of Nairobi looking for a husband while carrying a placard in August seems to have set a precedent for other women to follow suit.

In photos that went viral on social media on Thursday, another woman, Cate Gachara, 27, is seen on an unidentified street carrying a similar advert, calling for a potential husband who matches her requirements to make a bid.

In the placard, Gachara says she is a mother of three and categorically states she wants to be married to a white man. She also boldly makes it clear that she is ready to be a good wife accompanied by a cell phone number.

She further describes herself as a God-fearing woman and warns jokers to keep off.

In August, a lady who identified herself as Nyambura was captured holding a placard showing that she was scouting for a husband on one hand, while holding a young girl’s hand believed to be her daughter, aged 7.

“Need for a husband pris.Nyambura 28 years. I have a girl child 7 years ” Nyambura’s sign read in part.

Reports indicate that she received hundreds of calls and texts following the advert.

Ready to be a good wife? Wow! And you have three kids at 27. God forbid! You will find some nuts if you’re are lucky.

White-trash or hillbilly will be happy to marry you

That's right, the wealthy mzungus does not look in a black woman's directions unless you are Naomi Campbell or Prince Harry 's Girlfriend( actress and more white than black) and those you see in Kenya mangangaring on Moi Avenue or actually vacationing in some resorts that I can afford in MSA are just middle class earners. The real mzungu with money is not dining and wine with wananchi kama sisi , they are flying over the Nanyuki, Mara, Aberdares etc exclusive enclaves or somewhere in exclusive resorts in Lamu :-)

It couldnt have been placed better.

Kenya. To say White Trash, you Took Words Out of My mouth. You seem to know the Mashinani around you very well. And if she is Not Careful, she may End Up in some White Brothel Somewhere in Europe, US, or Canada. Then she will be CRYING for Amina Mohammed to Bail her out.

Crazy world. She doesn't know what she's asking for. Some people still think that white is better. I challenge her to go back to her roots and there you will find her match.

Her Body, Her life where do haters come in on this? Leave the lady alone.

Waoh why not just a man , why a white man? I pity my fellow ladies who think a mzungu is a God. I have a few friends married to "wazungus" and all that Ridge Forrester romances on the Bold and the Beautiful is just that , act on TV , the reality is nothing like that and most are just boring dudes and most are just middle crass he he he.... and crass is intended meaning. I personally , mzungu is not my cuppa, I like my Kenyan brothers well some not those who talk trash like some here.....

Heh he I know even some of our brothers who marry whites will parade their enormous overweight wives on facebook and their mulatoo kids doing what normal kids do or go to in America and the likes will be like a 100 like and loves . Then compare to a normal kenyan dude with his brown family doing the same and gets like 2 likes ( ha ha ha) and if the wifey was overweight nyeuthi mama, she would never make the FB page .. ha haha . Some of our brothers and sister still have have inferiority complex from ukoloni . I 'm very observant on this ... kwanza in those Kenyan gatherings, everybody swoons over those watotos and somehow behaves well with a sheepish smile towards the "white " spouse but the normal family, no one even says hi to the kids or mama , its like ah...yeah........

Really! are you serious.Africans/blacks we have aterrible image problem. You continue to give mzungu fuel to laugh at us...
The image mwafrica has on mzungu is," mzungu is rich,and generous, mzungu will treat his wife with tender gloves. mzungu ,does not beat his wife ,and that his wife holds the key to the joint bank account...It is unfortunate that Msungu is reading this comments in amuzement.

Its your preference. Dreams come true

Go get married to whoever you made babies with.

Lady, if you are God fearing, why dont you pray,or go to church,and look for a spouse there.And if you have prayed,did God tell you to do what you are doing?
I hardly think that a street is designed for such serious issues.By the way, what is "God fearing".I have heard that God works in mysterious ways so I wonder how he takes it if one pray specifically to marry another race,instead of "God almight,please answer my prayers for agood ,loving,and 'God fearing' husband..."
I dont know if Mwakilishi can relay this massage to this lady,but I can get her anice mzungu if she can convince me that wazingu men are better that africans,in whatever categories/traits, she looks for in a man.And would she take up on an african man who has all the requirements except skin color?Ican line up afew for her.

They are not Black;they are Luo Haters.

Lady why do you want a mzungu.Is it the money or are you looking to create the next tiger woods or Drake. At 27 with 3 kids you need to take it slow. Men white or black are the same nobody is dumb enough to take on such baggage.Most probably you are looking to be an escort and the type of women who do this kinds of jobs do not parade openly on the streets

Obamas was born of white and african parents . Why do you care . she does not need your advise .Everyone has a right to lead a life they choose. Insulting Kids who did not choose where to be born is unethical and irresponsible but we have so many of us who are disturbed and ethics do not ring bells in their collapsed minds

TUNAISHI AMERICA LAKINI WAZUNGU HATUTAKI.CHECK AND GIVE ME ATLEAST 20 WHO IN THE WHOLE WORLD MARRIED MORE THAN 30 YEARS BTN WHITE AND BLACK(WHITES KNOWS YOU ARE CHASING SKIN AND MONEY SO NO LOVE)NOT ALL WHITE PEOPLE ARE GOOD. AWHITE PERSON CAN KILL YOU AND PUT IN AFRIDGE AND KENYA AUTHORITIES THEY CANNOT THINK UPTO THAT.