Kenyan Woman Tries to Rob a Bank in Texas [VIDEO] 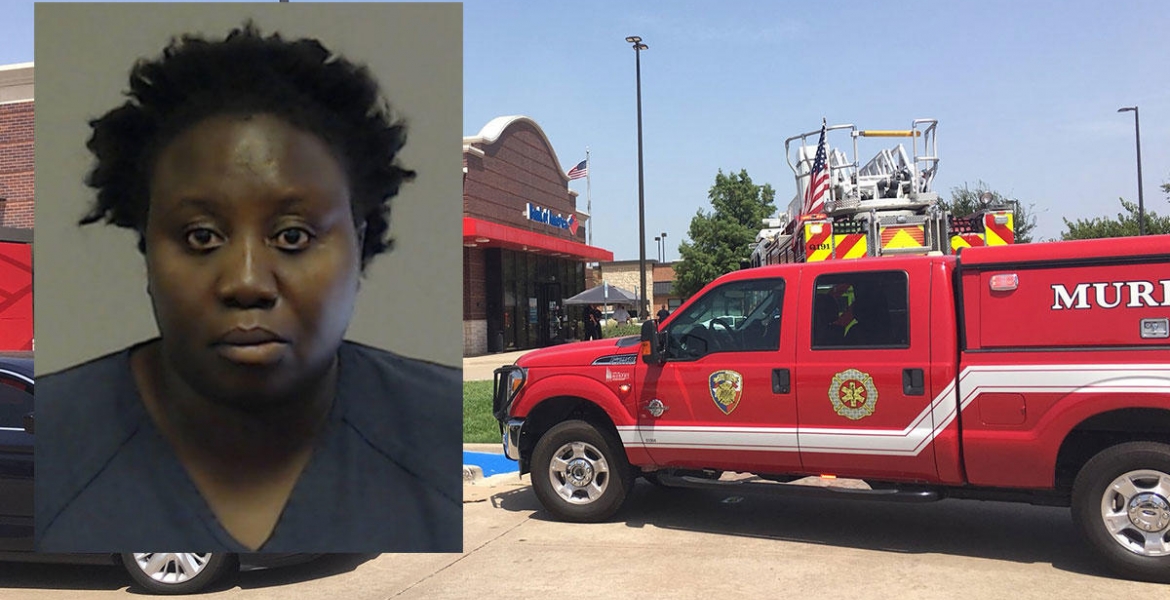 A Kenyan woman tried to rob a bank in Murphy, Texas on Wednesday.

When police arrived at the scene, they tried to use paper spray to subdue her, but she pulled a 9-month-old baby from her car and "attempted to use the child as a shield," police say.

What the hell is going on with some Kenyans in Texas? Mr. Chemirmir the serial killer is about to face a dead sentence and this wonna be a bank robber obviously ain't that brilliant because her strategy is mind boggling; armed with hammer? Lock her up!

Serious mental case hope she gets help. @Guest 1 why are you not helping your neighbour in Texas?

SAMSONs (and his DELILAHs) is UnHELPABLE. Anyway: I am not Texan; MI no Mkenya.

Don't be too quick to judge. The young lady has a problem beyond monetary. Those close to her know what she's going through,ppl do go through relapses. It could be one of us or closest relative, life sometimes can take a turn you least expect, and not all those turns are financial. I know her and know the family too. At least pray for the family and her child.

Quote, "armed with a hammer, gasoline and lighter fluid. She poured gasoline and lighter fluid on the bank’s lobby and demanded cash from the tellers while waving the hammer". How do you justify severe mental health/insanity when she obviously pre-meditated and orchestrated the whole scheme above? That wouldn't fly in American courts. Whether she's having relationship issues, financial issues, substance abuse issue, job related issues or postpartum depression, you have to agree she made a colossal blunder. In court you have to prove absolute insanity. Insane person wouldn't meticulously think of planning all she had/did.

As a first responder let me explain to you what normally happen in such situations. The police and first responders on the scene normally assess the accused for mental stability so as to decide whether he/she meet the criteria to be jailed or to be taken to Emergency room for psychiatric evaluation. For her case, she was taken straight to jail and already facing charges of robbery and child endangerment. So that means she's deemed mentally stable. Obviously she's has issues going on but postpartum depression is not enough of a diagnosis to be set free in US courts. Claiming, " survival" as you say or desperation ain't gonna fly in texas courts. She planned it however, juvinile or crazy it may seem. Just watch what will happen next. I suspect substance addiction.

Mkenya, I agree to disagree. If by any chance she was on an induced psychosis. She needed to be taken to the hospital for evaluations. Either way jail wasn’t the right call to begin. Jail boarding is way too familiar in this day and time. She needed some form of professional mental evaluation. I hold a degree in Chemical Dependency and also worked in Mental Health for 8 1/2 years. This is way too common.

The fact that she is black probably didn't help much as well. I feel she must be going through some serious mental problems. It doesn't take a genius to understand that such a plan wouldn't have worked anyways

xG, you seem to be celebrating her predicament. It has obviously not occurred to you that she could be going through hell. Pray for her and her family instead.

A cry for help. I am certain she will receive the help she needed especially mental health services.

It could even be Postpartum (after Childbirth)
DEPRESSION gone very Wrong.

Judge-. Do us Justice and Tell US what she is Going thru.

"...At least pray for the family and her child."

you are talking like a very ignorant human being. I dont think this young lady would want to put her infant in harms way. But since you think you are untouchable or invunrable. Jipe raha

Don't point a finger on this lady. She has a 9 months old baby. Post-partum depression is real and it could be the cause.

In real life, who robs a bank with a hammer?,
Gassoline and lighter fluid?
How was she to start the fire?

It could be your loved one, so don't be so harsh on her.

God have mercy on her, nobody knows what she has been going through, America can be touch,so lets not judge her.

Poor thing!!! This lady must be having a paranoid personality disorder, anxiety and/ or disturbed thought process.Something is just not right! Unless she is on some drugs that have altered her thought process,She seriously needs help.Some good medical and psychological evaluation would lead to a proper diagnosis because she does not belong in jail, she belongs in a mental ward or hospital and also with loving family who may know her medical and family history. There is no need pointing fingers at her because mental illness does not choose.It can be due to a traumatic experience, stress, fear, or even abandonment.It could be lonliness as it can be in a foreign land or drug abuse.It is inconceivable for a woman single handedly to have the guts to rob a bank with a hammer, gasoline and a lighter leave alone using her baby as a shield, does it make sense? I think she is sick and needs help before she harms herself or her child. Don't judge, help her. Such cases should not be taken lightly. I hope and pray that she gets proper help and that Kenyans who live closer to her can find a way to help.✌So sad.
Concerned.

She is not sane, she should be taken to mental hospital, all I can say she just wanted to arrested

I agree with most of the things you said except your ‘diagnosis’ of her condition. Even the best Docs have to see/ interview a pt before throwing out a diagnosis. Paranoid personality disorder🤔🤔???

This lady must be having a problem , she’s probably going thro hard times in her life and this is not a case to laugh about ! Please people find out about our Kenyan neighbour who hide from everyone and know what they are going thro pple are ending up commiting suicide lets unite like community and be our brother and sisters keeper

MAJORIY of Kenyans in Diaspora are USERS; and Minority are USEES. This Lady could be a USEE (a Victim of USERS).

I believe she has a mental problem. Let's pray for her.

What the hell are you talking about? What is 'postmotern' disorder? Do you have to comment even when you are clueless as to what people are talking about?!

Collect yourself first and then put down you thoughts .... you come out so bitter all so often when diasporans are involved. You mean Kenya has no mental health and stress issues nowadays? Haiya, and the way you come out like half-mental...

She need help. It could be depression or any mental illness.

I wonder when did y”all become psychiatrists. You all giving diagnosis and y”all ain’t qualified to do so. Please pray for her and her baby instead of diagnosing her. Whatever her case/ diagnosis maybe pray that she and her infant baby receive the best of care.

@ Karen, are you suggesting that prayer can cure mental health problems?Or a headache for that matter.I bet you are praying for her.Good.
In african settings,before Mzungu came with his "Psychiatry", wafrika could tell somebody with mental issues,without any collage degree. It is with this inborn wisdom of psychiatry,that some of these commentators are using.You also have to agree with me that the PHds in mental fields also get it wrong sometimes. Like they say, you ask 10 psychologists a question/diagnosis, they give you ten different answers.

My only question is did she pray before executing her madness and placing her innocent child in the thick of it. This obsession with prayer and never facing problems head on is what is ailing Kenya and Kenyans. Jeez, Kenyans pray so much they could even export prayers to the rest of the world and still be left with plenty. If only it was a valuable commodity!!!. In short it is called wastage of time and digging our heads deep deep in the sand. The reason why our maker created a brain in us is so that we would THINK. Acknowledge when we are in trouble,go see a doctor not buy petrol and a hammer to go kill some people.

Maxiley: Wait until you get Bed ridden or Bed Chained and that's When you will know that there a Supreme God to Pray to in Time of Physical or Mental insanity.

As a Christian, I know prayer changes things. As a Mental Health Practitioner and also a holder of a Degree in Chemical Dependency little facts are known as to why. That being said I will not do a complete assessment on her on the reported facts. Much more goes into psychological assessments and also whether or not she was on an induced psychosis. Poor baby, the woman needs help too.

@Wacha zako, you have to see the behavior of a person first before you can take them to mental hospital. Home diagnosis is a must in order to take those who need help into mental hospital or any another health institution

That stupid country can drive you to do even worse things. That is lady is just desperate, america imemchosha and she is need of money. Unfortunately she got caught.

At first when I saw the headline I thought wow she is a gangster but oh no she is not . No way anybody gonna plan robbing an American bank or any bank with sijui a hammer. No way . This story don't add up and I bet there is more to the story . I could be wrong but am not judging ....

Obviously what Evelyn did was wrong and extreme. But let’s not pass too much judgement and show compassion. Let’s hear everlyn story told from the beginning to where she got where she is. Can someone tell us her story...?

I like assessing issues realistically:-
1. Kwanza weka kando assessment zenu on someone you absolutely know nothing about.

2. Realize that hapa ni Marekani and in these times we live in, under this administration and the circumstances migrants face and at the same time get deported for minor offenses, nani atajisumbua kusikiza kesi ya huyu dada, do you think she stands a chance.

So yes, prayers and sympathies are in order, lakini at the end of the day, wacha tukumbukeni kule tuko. Hapa sio Kenya

SHE NEEDS MEDICAL HELP NOT JAIL TIME.
But in USA the more people they put in jail, the more they make.
Correction facilitis are GOLD MINES.