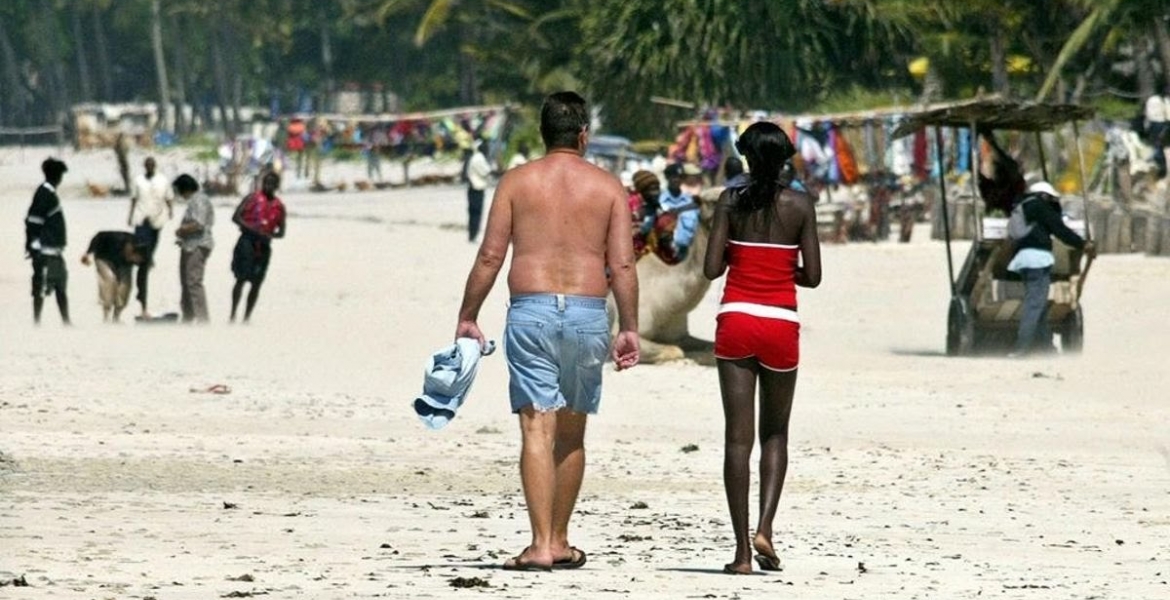 Some Kenyans are offering their spouses to rich foreign tourists in a bid to earn more income to sustain their families, it has now emerged.

Here, husbands agree to have their wives taken by wealthy foreigners who want to have some good time, earning good money in the process, The Star reports.

One such person is James Kimani, a tour guide, who says they have been doing the business with his wife since August 2018, in pursuit of extra income.

Kimani explains that it started when a tourist asked him to hook him up with a woman to spend time with during his stay in Kenya.

Not willing to have the opportunity escape him, he discussed the matter with his wife, who agreed to be the tourist’s companion. The two agreed she would pose to the Mzungu as his sister.

"Yes, I have a nice, bubbly woman. She is dark-skinned, well-endowed and naughty. She is my younger sister, very single and well behaved. I can bring her tomorrow," he reportedly told the white man.

Kimani said they still love each other as a couple despite offering herself to tourists, adding that she has been bringing home up to Sh40,000 monthly. During the interview, he said his wife has been away from home for the last two months.

"Why should I make another woman rich yet my wife is jobless?" he poses.

"We still love each other, we are still married and she supports this family. She is the breadwinner," he adds.

Speaking to the publication, Kilifi County Police Commander Patrick Okeri confirmed he is aware that this happens at the Kenyan coast.

"Recently there was a case of a woman with two husbands, a foreigner, and a Kenyan. She shares her house with the foreign husband when he comes to Kenya and when he leaves the country her Kenyan husband comes back home," he said.

Paul Adhuoch, the head of Trace Kenya, a child rights organization, says underage children have also been engaging in sex tourism at the coast.

He says over 13,000 minors engage in sexual activities along the coastal counties annually, a majority of them being girls. This, he says, has resulted in an increase in unwanted pregnancies and sexually transmitted infections.

Well, we are after all the most generous African nation ....

The Kenyan government has killed the economy of the Coast.

The Kenyan coast is not Kenya.They need their own country so they can build a working economy for themselves.

The Kenyan coast must break free from the rest of kenya.

Mmmm.This makes me ask the question,"is this the beginning of making sex to be not abig deal?" Undoubtedly the husband is the pimp,and the wife is the prostitute.
Usually men would kill at the thought of their wives hankey pankeying with another dude.I guess times have been changed by the need for cash.
What I am wondering is that, did the man really convince the wife to do it,or has she been doing it secretly unbeknown to him, keeping the cash to herself?
I read something in the dailies about male prostitutes in Kenya.These are not gay men.Women pay them for sex...Really!Why pay if you can get it for free,unlike men who have to pay for it one way or another.Yes we really live in interesting times.
LIke I have said before, there will come atime when all that will guide us is the law of the land.Our morals,and ethics are fast eroding,and becoming subjective.Take the issue at hand now for example.How many people will rationalize it as being OK.Iam sure afew. The fact that even that afew are there proves my point. Its just amatter of time before it becomes accepted socially.
By the way, this is not news.Some Families at the coast have been pushing their adolescent daughters on to wazungu for cash.In my view, this is worse than a man pimping his mature wife...

Maxiley, you are completely correct. Two months ago, a close friend's wife propositioned me which left me quite speechless. This is someone whose husband I have known for 7+ years. Besides pleasantries when we meet which is always in the company of her husband, I have never even come close to being friendly with her. She got my phone number by scrolling down her husband's phone. She no longer communicates once I showed no interest and stopped picking her calls after the second conversation when she made her intentions clear. She was surprisingly explicit for someone I hardly know. I have decided to keep my mouth shut and minimize my interactions with them as a couple. I know two more men in my circles who have similar experiences. What was a no go zone before is becoming normalized.

@ Thuraku,till few years ago,it used to be an accepted notion that women are NOT"too sexual". This myth has been debunked as you can see in your case.
You should be happy that the woman after failing to "conquer" you did not turn things around,and claim to her husband that you were making moves on her...it happens.No wonder hell has no fury like a woman scorned

If the wife gets pregnant, will he regard the children as his own? That would be an unhealthy lie. Is money worth more than health? Because as he pimps his wife out to tourists, she will eventually bring a disease back home. Someone who asks for an 'escort' is someone who frequently seeks out prostitutes, even at his home country. He is bound to be a 'carrier' of something... STDs, or HIV.