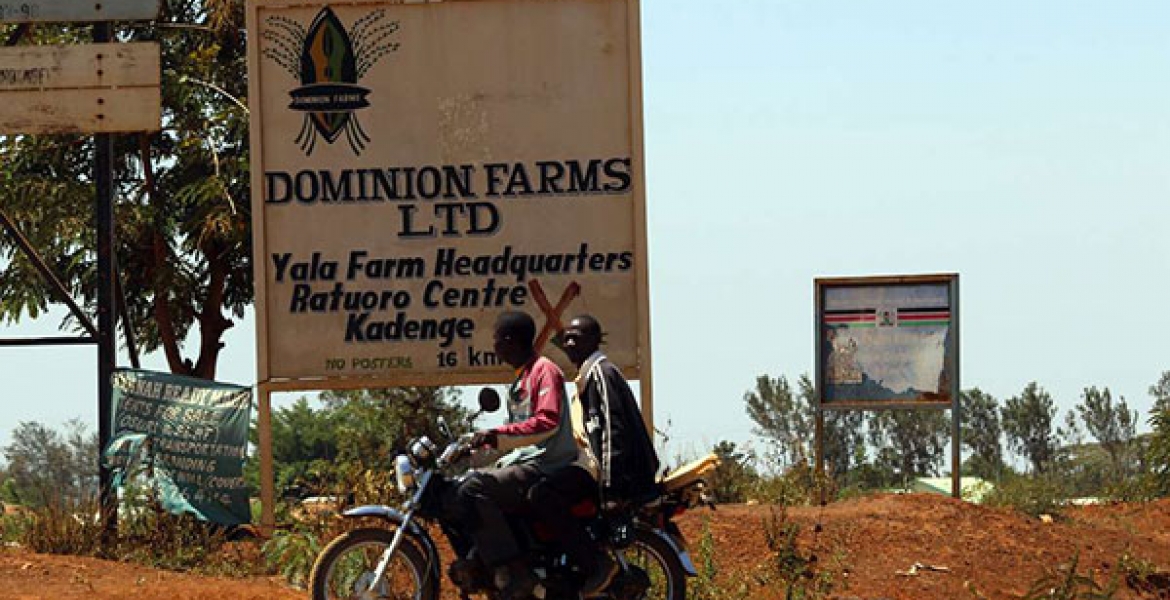 American tycoon Calvin Burgess has reportedly sold out his multi-billion-shilling farm in Kenya following what he termed as frustration by politicians.

Burgess allegedly sold the 3,700-acre Dominion Farms in Siaya County to the affluent Rai family, according to a gazette notice dated January 13th, 2020. Over the years, Burgess has accused ODM leader Raila Odinga and his allies of frustrating him despite investing billions and employing many Kenyans in the farms.

Sunday Nation reported that the vast farm was acquired by Lake Agro Company, which is owned by Jasweet Singh Rai, Tejveer Singh Rai, and Onkar Singh Rai. Burgess is expected to foot all the debts and liabilities that the company had acquired before the transfer is completed.

Burgess, who started Dominion Farms 17 years ago, had expressed plans to make it the largest farm in Africa. In 2017, he released a 22-page dossier accusing Odinga of frustrating his investments after he allegedly refused to bankroll his presidential campaigns in 2007.

But Odinga, through his ODM party and proxies, has constantly dismissed Burgess’ allegations as false. In 2017, former Gem MP Jakoyo Midiwo and other ODM leaders came out to defend Odinga from the accusations.

“We know he is planning to relocate, but we want him to leave the farm machinery intact because they were bought in this country with money generated from the sweat of our people."

"Odinga is not a beggar as Burgess is trying to portray him. We are not going to allow him to continue tainting the image of our leaders,” Midiwo said.

Other reports suggest that Burgess’ trouble with authorities began after he refused to seek the county's approval for some operations. He was also accused of hiving off over 3,000 acres of community land and blocking roads that linked Namonye and Ratuoro Centres in Siaya, in addition to overhead chemical spraying of crops and barring area residents from accessing the river.

It was Raila's corrupt Politicians and Campaign managers were using Raila's name; not Raila himself. Anyway: When I met Burgess for first time some years back, he complained to me about some people, some Politicians wanting him to Bribe them to allow the Rice project to pick up. In fact some of these Rogue politicians Incited the Locals to protest against his Benevolent endeavors. For all he wanted was to create Employment for people he loved in the Lake Basin. He is a very Patient man; very Tolerant.

When you met him in your dreams.

"As the LORD Liveth" I met this Billionaire at least 2 times. Now you go figure. You think every body on Mwakilishi is mere Shit like you. FYI: I dare you to Ask God and He will prove it to you (if you have Spiritual Ears to Hear). Meanwhile: May the LORD rebuke you for your Loud mouth!🙏

So meeting this billionaire makes you a lesser shit than me? It doesn’t take much to get into your nerve uhm.

This MP has to be one of Raila's people who were FRUSTRATING Mr. Burgess. LORD have Mercy on KituKidogoers!🙏

Now who is the biggest loser?
The billionaire investor or the people in the region? Shame :(

The mzungu is the winner, selling land that he never bought.

Kenya is a high political risk when it comes to foreign investors. The case of Dominion Farms Ltd is not unique. Other companies are also planning to exit Kenya because of unfriendly and unfair atmosphere being advocated by NLC, EACC, Attorney General office, Survey of Kenya and the Ministry of Lands. This institutions have taken law in their hands and are frustrating foreign investors by arbitrary repossessing their properties without due process as guaranteed by the Kenyan constitution. The role of Judiciary has been minimized to only petty cases since this institutions are wittingly ignoring Court orders as if Courts no longer have power. In some cases Judges are working in cahoots with this intitutions

Well i think the biggest looser is this white idiot farmer!The time we the blacks will have the control of all our farms will b the best thing ever whether we farm on them or not but having them owned by we the blacks will b the best thing ever thou it's sad it has gone to more idiots indian corrupt too.Raila remains the most corrupt politicians in kenya coz this white farmer had taken them to courts coz they were interfering with him.Arudi kwao akalime huko acreate employment huko kwao pia.What this guys do is to manipulate africans ati they r creating employment yet they r milking our pple in slaverly.

One thing with Kenyans is lack of a concrete thought process.. how does arudi kwao add or progress the underlying issues of unemployment and food insecurity? Not a damn thing we use is produced or manufactured in Kenya.
It would be nice to use our brains for progressive thought.

You absolutely knows nothing you're talking about. FYI: This was Wasteland and "Useless" until Burgess made it USEFUL.

The people in the region are the loser ,job gone,politicians will never eradicate poverty they are are comfortable with empwered people ,that is why they will frustrate anybody with the idea of community empwerement

Exit is most welcome. This is just the beginning. It is time for Revelation and restoration. Anything taken using force,lies, corruption, fake agreements and colonialism is about to be restored to its rightful owners. The exit of "dominion" and dormination is a sign of the times and times to come.
Good bye dominion. Create employment in your homeland. It will be most welcome!! Kenyans and Africans will take care of themselves!!

Kenyans will be starving very soon because the Whiteman knows how to farm and produce..im just quoting how people in foreign lands were saying and still say when they saw Mugabe taking white farms back. And probably they said the same in 1964 when almost all Kenyan so call white highland farmers left. I guess we've been starving ever since that date. I don't know how this guy acquired his farm hence no need to have input unlike the white highlands and Mugabe's. I really supported Mugabe farm take back though I did not support how he was redistributing it.

We all know politicians are opportunists but why would this guy block roads and refuse residents from accessing the river? What kind of nonsense is this? Do foreigners block roads and refuse locals from accessing the river in the Western world? He was only in it for himself not the community and perhaps paying workers peanuts. Kwanza hiyo aerial spraying, was it environmentally safe?

Mr. Burgess built Schools, Dispensaries, and other Facilities you name them in this area. And he wanted to do more; but Envy, Lust, and Corruption by the Locals hindered him.

So, thoughtfully..., unless we are a banana republic to begin with, how would the so called foreigner have such powers? Which local(s) is offering him cover for these actions you allege? We are back to again backing the wrong tree.
In western world people mostly use institutions to solve their problems and ours are corrupted nothing to the fault of the foreigner but to the voter.

Wakwende kwao hawa washenzi wacha tuwe na mashamba yetu sisi wenyewe tukufe na njaa mpaka tunjue kuyalima.Look at southafricans who still fighting for their land back but hawanjaweza juu yote imeimbiwa na this jungus while they squeeze themselves in shacks n slums.Malema keep fighting for the southafrican blacks farms to b given back juu mandela failed terribly in that area.Tusindanganywe ati they know to farm beta than us.That the foolishness black man is always cheated.Come kiambu n see how we farm in small plots n we call the shot by feeding over 5 m nairobians every day