Kenyan Man ‘Over the Moon’ After Trump Responds to His Tweet 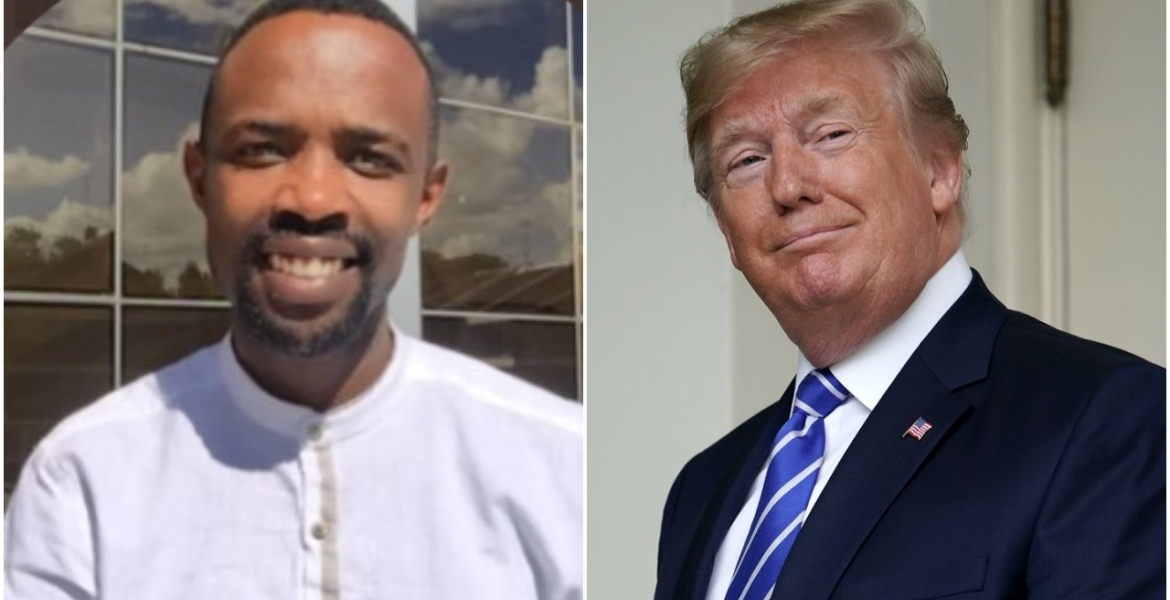 A Kenyan social media user was thrilled after US President Trump responded to his comment on Twitter on Sunday, May 3rd.

This came after the Twitter user by the name David Kyallo Musyoka came to the defense of Trump after he came under fire for attacking former White House Communications Director Nicole Wallace, who currently works for cable television channel, MSNBC.

"She was thrown off The View like a dog, Zero TV Personas. Now Wallace is a 3rd rate lapdog for Fake News MSDNC (Concast). Doesn’t have what it takes!" Trump said in a post.

Responding to the tweet, Musyoka claimed that Trump had done more for blacks than the rest of US presidents combined.

He wrote: "Trump has done more for Blacks than all the other Presidents combined! Are we together?"

Trump agreed with him, saying: "So true, although Honest Abe [referring to 16th US president Abraham Lincoln] wasn’t bad. Thank you!"

An elated Musyoka thanked Trump for the reply, noting: "Thank you Mr. President! I Pray for you as you diligently serve! You are doing a fantastic job. May God grant you wisdom beyond your own understanding and the courage to always choose the right path no matter how narrow the gate! God bless you man of Courage, man of valour!"

Confused Kenyan man from Asshole nation. What has Trump done for blacks? I need to know.

Musyoka you're not Black; you're African. But anyways: What has Trump done for you beyond referring to you as Shithole?

I thought Trump was the only guy who is an embarrassment to the world. Kumbe kuna mwingine called Musyoka. Poor guy you have no idea how much trump hate people of your color

I am happy we have many Kenyans supporting DJT.He is an honest God fearing leader who sees what many have been blinded not to see by the devil.The socialists and extremists wanted you to reduce your population seed discord and destroy your economy before the final assault and take over.To their disappointment DJT was elected POTUS.God's will shall prevail.

From which cave did you emerge, Mr Deteriorating Rapidly (DR) Simon Kibias? A cave somewhere is missing it's dweller. Please go back asap - you are a disgrace to humanity

another educated fool like Musyoka detected. Kweli education is overatted if a full doctor can believe Trump lies then we are doomed

Maybe we can forgive Musyoka as he just looks plain stupid! Wow, but this one with a crazy “dr” title ought to have a severe ass whipping for being an idiot donkey

What a silly shithoke cave man! Return that dr of ignorance to the third rated place where you got it! A true “Gator” during colonialism in Africa! What a snitch!!??

Hata wewe Umezidi na zako za Kino!😂😂😂 What is Kino by the way?😰

KINO - Kenyan In Name Only!

Kenyan In Name Only!

haha, guest one. this guy totally drove me nuts. he thinks while he languishes in poverty in his Machakos hut this guy cares about him? he is a joke and needs to be whooped.

How is this news? Please don't print such crap for smart readers here at Mwakilishi! They ain't got no time for this! Aren't there other news out there that are newsworthy? This is such a degrading news, I honestly thought we Kenyans can do better!

DObetter, I agree. Every time a media outlet gives such people a platform to express their foolishness, and we spend time responding with insults and anger, we are wasting precious time. Mwakilishi, please report important news and help us focus on building ourselves here and back home. We are in the middle of a pandemic. Let's focus, please.

Just a shallow empty SOB, go tell that to the relatives of the 66k and counting dead corvid 19 victims, that the greatest country in the world can not stop a virus because of his silly mistakes missed opportunity and incompetency.

Is it really worth to post such negativity on someone’s opinion? Just an honest question that needs an honest self reflection...

I am so happy for him for supporting President Donald Trump. Trump is an awesome president. American politics has nothing to do with personalities, its party platform that counts. Those talking nasty stuff about this dude: how many of you have read both party platforms. Its not Obama rhetoric Yes we can that affecting us, its his policies like Obama care, gay marriage, stupid regulations that cripples economy and abortion, its not Trump tweets that is affecting us, its his policies like cut taxes that catapult the economy, defunding planned parenthood that kills innocent babies in droves. Democrats are master deceptions. Have deceived millions as you can see from above comments.

White supremacists have landed on Mwakilishi. Go take your believes somewhere else. We are the black people you despise all the time.

Educate yourself by reading both platforms, then you can make a prudent informations. Getting your information from CNN won't do you justice. This is always liberal playbook, when you don't agree with them they hurls insults. It's very juvenile and uncalled for. We can disagree, but still be civil. Trump will win reelection.

Next election will be a referendum on leadership. So, whoever Americans think is capable will be elected. No I'm not a CNN addict; I watch Fox sometimes. This allows me to have an independent mind. I'm not a liberal either. What are you? An evangelical or a supremacist?

Trump is the Godliest best President in the recent past. Recognized Jerusalem as eternal City of the Jews which his predecessors hadn't the stomach to accomplish. He confesses Christ openly. No matter how much abuse and bile from Haters can stop God's movement. I'm praying for Trump win next elections.

Even Hitler pronounced himself to be a very godly man! But that did not stop him from killing 6 million Jews!

We have seen his strength in dealing with China n Korea Russia and the constant insult the is administerd by the media. Where was your outrage when Obama killed libyan leader why are you attacking the guy personally why can't you respond to the comments I understand most of you are on the left and would like to think everybody thinks like you but sorry to say some of us love what Trump is doing

He will be invited to white house soon, then he go to cloud 18..( Drum roll please). Fellow Kenyans we need to get out this mindset of being conditioned that we support certain people based on what someone told us. Democrats acts like they poor, but they are millionaires thru corruption. How come all cities that has democratic mayor has the worst crime, highest taxes, always broke, highest poverty rate and high cost living. Platform is what tie people together. Everyone has an agenda that is trying to drive through. Kenyans thinks that democrats care for immigrants, no they dont. Obama had with 60 senators and majority in the house his first 2 years. Why did he not give papers back then? Reagan was the one gave people papers. Why people keeps supporting people that supports murdering babies is beyond me.

As an actual voter, it's not because I believe the Democratic party is pure or perfect. However there is a reason that the southern racists decamped to the republican party between the 50s and 80s, there is a reason why Nazi sympathizers end up in the GOP, there is a reason why most non white people end up as Democrats. People, unless they are stupid, vote their interests. BTW, black people in the US voted republican (when they could) till the 1940s and changed over the next 40 years to vote almost monolithically for Democrats by the 80s. Republican policies pushed them out. Trump and his party are racists. You are from what he termed a shithole country. Do you know what comes out of a shithole? He is clear what he thinks of you. What do you think of yourself?

Mundumugo, very accurate presentation. Blacks used to be Republicans. It pains me today when I see black idiots supporting people like Trump.

@Sokora unfortunately some of us are too willing to regurgitate Republican talking points espoused by their media arm Fox News. They fail realize that red lining was/is real and accounts for the wealth inequality to this day. It's like blaming the rampant poverty, inadequate sanitation etc in Kibera on the residents as if the government was blameless. I went to school with some of privileged in Kenya and in retrospect, they sounded like republicans. Their are always fools who get taken in by the rhetoric.

All said and done, don't bind people using race to a particular party. That's why I'm a proud independent.

Musyoka, it's true Trump has done a lot for blacks. But haters can't swallow it..e.g. Justice reforms, highest unemployment pre Covid & the list is endless...Trump is just a rich Uncle who doesn't give a shit...He date Models btw.

You really aren't too bright are you? Here are some unpleasant facts for those who kiss Trump's hemorrhoids - I mean you.
The economy for the last 3 years under Obama created more jobs than under Trump during an identical timeframe
https://www.google.com/amp/s/www.forbes.com/sites/chuckjones/2020/02/07…
Obama left Trump a pandemic response team he promptly disbanded
There was no covid 1-18(Kelly Conway) so Obama's team couldn't very well have research on covid 19
Trump has been in control for 3 years 4 months, if the cupboard was bare he has had plenty of time to restock. Republicans would have blamed Obama if the pandemic hit during his regime- they tried. Trump inherited a great economy.
Face it, Trump is a philanderer,a racist, a liar, corrupt and grossly incompetent. So much for being a man of God.

Don doing okay compared with the 1st black pres Clinton and Jezebel who did the most and lasting damage to blacks. The laws they made have had devastating effects on blacks to date. Jehu put the final nail on Jezebel casket 2016. She's no more. Feminism was meant to control the white man but it has destroyed the black family. It's a wrong tool for the wrong family

Kyallo is entitled to his opinion,You don't have to castigate him.Just bring on more convincing objections on board.

Trump is who to never be to qualify as a human

European living in USA.There's no way this president has anything to do with God,that's only a facade he puts for who is so blind and deaf want to his selfishness and hypocrisy.He didn't bring back jobs from other countries,as for his daughter has many interests/businesses in China.He really doesn't care about POC if it doesn't help increasing his TV ratings.
I was born in an ex communist country and I can recognize a narcissist dictator.I went through a lot of this shit,lies,lack of freedom of speech,fear of own opinions,controlled press,etc,etc..exactly what's happening right now,right here in America.I have never seen such an incompetent,ignorant and unfit President in the modern history.
Mundumugo👍🏽Sokora👍🏽

Musyoka the cheap publicity that you wanted has no impact on your life! Trump is the worst America has ever had! The worst treatment blacks or immigrants have ever had to deal with is this old man! Musyoka hypocrisy is so real in you!!

Should I cry or laugh at Musyoka’s level of ignorance!? How did it all happen that creatures of no reason like him do exist? From a little mud hut in Macharia to the largesse of American politics. Let me close this chapter cos it ain’t worth commenting on it!!