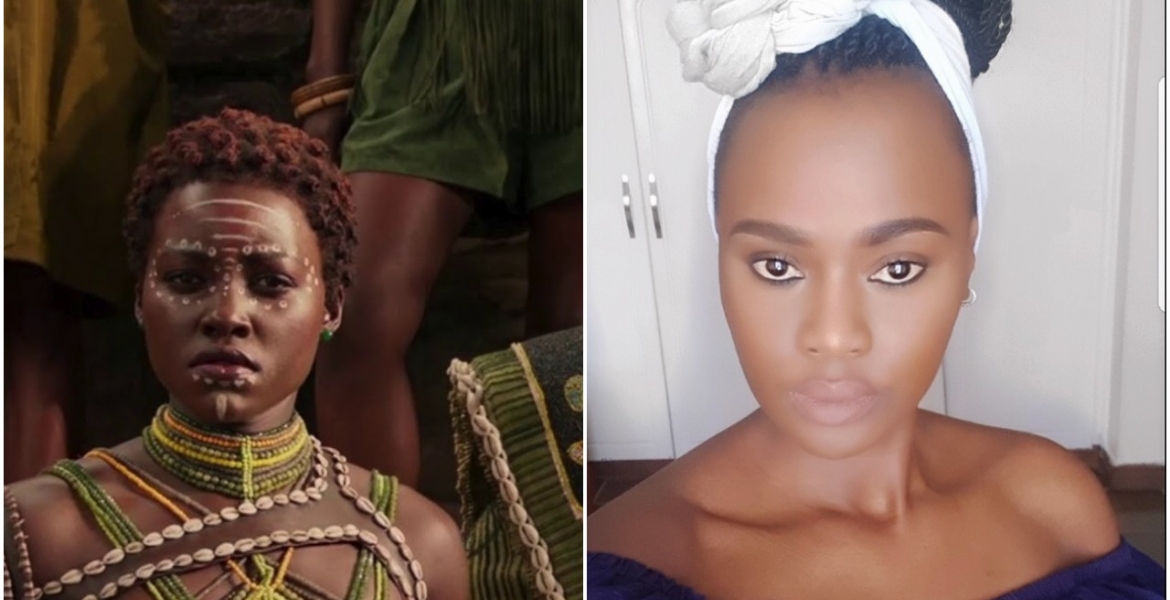 Black Panther, a 2018 American superhero film, became one of the most successful movies of all time. The special effects used on the movie, which featured Oscar award-winning Kenyan and Hollywood actress Lupita Nyong’o, was one of the elements that made it distinctive.

But unknown to many is that Kenyan make-up artist Grace Murema was behind the special effects used in the film. Murema, 28, is the founder of East Africa’s first special effects product line.

Murema said although Black Panther is her biggest project, she was never paid for her work despite the film raking in billions of dollars. Grace however says that does not bother her since the project opened many other doors. “We were not paid, but for me, it was fine because it was exposure for me as it opened other opportunities,” Murema said in an interview with NTV on Sunday, adding that she has worked on a number of Kenyan films and ads.

"I've done two movies in Kenya, Disconnect and 40 Sticks which is yet to be released. I've done some series, there is Mgema Akisifiwa, I did the pilot for Maria and a couple of ads."

Murema sys she developed a passion for makeup at a tender age.  “From high school, I knew makeup was my calling. I didn’t even enroll in the university. I went straight to beauty school. I did the whole beauty package; Massage, nails, facial, hair, everything. However, I was gravitating more towards makeup. Three years later I decided to specialize in special effects makeup,” she said in a separate interview.

“The glam makeup look is a very crowded industry here. Everyone is doing it. I just wanted to do something different that would set me apart from other makeup artists. I did my research on special effects and prosthetics and went to school in South Africa for almost two years. Upon graduating, I came back to launch my career in Kenya,” she added in the interview.

Before any movie starts shooting,
Contracts are signed.
Get a lawyer and take it to court.
They will pay interest on the money plus pain and suffering.
GOODLUCK.

She says she was paid with “Exposure”, by Marvel studios. Which is illegal.

“Exposure“ is not a legal form of payment in the world.

Kenya artists pay people with “Exposure”. All of them belong in jail for fraud and misrepresentation of jobs the advertise.

I agree with those here that this is likely a bold-faced lie, however, I must still state that it doesn't seem the commenters here understand how guild makeup work, well, works. If you're not guild, which it doesn't sound like she is, you can, under special circumstances/by needs of production/in emergency be asked to, or allowed, to work as an Extra Artist on set. However, you very well may not be paid. Most are not but would still have to sign an NDA, course. 'Exposure' pays a LOT of new or non-guild artists; although it's called 'MCC' (Meal, Copy, Credit).

Of course there will be people who abuse this and all artists should take care to make sure they are at LEAST receiving these 3 things (specifically Meal and Credit if working on a guild film/show). This is how you make connections quickly and gain paying work quickly. What makes ME feel "🤨" about this article is that it is very vague and makes no mention of the Makeup Department. Also seems to insinuate that she was in charge of/heavily involved with (like a Key or something) the makeup when to anyone well-read film/tv artist that's false.

Joel Harlow was dept head with Ken Diaz assisting and this can be checked via IMDB. Many veteran artists were on that set. And for day players, interns, etc etc, if they weren't credited via roll credits, they are credited in IMDB (their responsibility). Grace is not credited in the Makeup Department at all. Fishy... All this tied in with the fact she and this article made no mention of the actual Makeup Department, director, producer, no names, no details, nothing. Leads me to believe this is fake and for clout/unearned payment.

If their is more to this story this is one of the situations where it is really on Grace to prove it and provide evidence, as she would definitely have some if she worked this set. Otherwise this looks in incredibly poor taste and could kill her working anywhere major outside of Kenya/Africa. Also, with the things going on in the guilds right now, it is an especially baaad time to want to stir up nonsense. Blacklisting is the best that could happen, being sued is the worst and more likely than you think. If there's more to this story, it has to be proven as it reads extremely unlikely right now.

Wow! You definitely know what you are talking about.. I got lost in the middle.. 😀