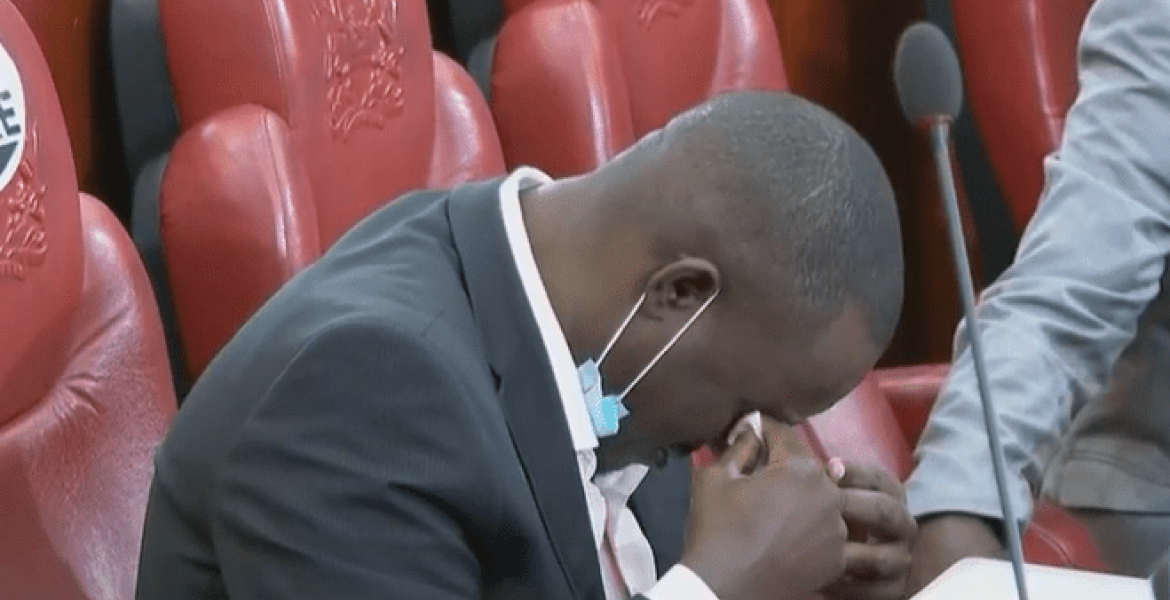 The Senate has asked Inspector-General of Police Hillary Mutyambai to beef up Kakamega Senator Cleophas Malala’s security after he complained his life is in danger.

On Monday, Malala broke down in tears in the Senate as he narrated how he has been receiving death threats in the recent past as well as being trailed by suspected assassins.

“I am a young father and husband… It is very disheartening for people to sit in a corner and think they can take my life. I humbly request this committee and the Inspector General of Police to take note that I have said time and again my life is in danger,” Malala told Senate’s National Security Committee.

“It is sad to walk in the streets of Kakamega and Kenya knowing I could be dead the next day.”

He further claimed that his pleas to have his security detail enhanced has been ignored, adding that a top leader recently accused him of stage-managing his arrest.

“I have written enough letters and called offices in this Republic but they have not taken any action even to give me extra security,” said Malala as he broke into tears.

IG Mutyambai had appeared before the Senate committee on Monday to respond to security concerns raised by Senators.

In a letter to Mutyambai and the Director of Criminal Investigations George Kinoti last month, Senator Malala alleged that a secret and specialized squad unit code-named ‘Bravo Zulu Yankee’ has been formed to trail and possibly harm him.

“As a result of those real and credible threats to harm, injure, eliminate or assassinate me, a Member of Parliament, I now request your office to take immediate action to enhance the security detail assigned to me including additional security provided immediately to my family and my residences in Kakamega and Nairobi,” the letter stated in part.

I can't buy this man allegations. He has all the details of those who want kill him. I mean their full names, images, gun make and model.

Someone tell Malala to call waiguru pleaseeee. Why is he crying, l thought he a total man. He chaired the whole process of waiguru how come now no one want to help this poor luhya man. Used and then dumped and now he is crying, hellpppppp Malala people.

How many young fathers and husbands walk around in fear every day because of uncalled for threats! Our grand mothers receive threats too but they put on a brave face and soldier on.

We all need our security beefed up and not only for a crying baby in the senate! We all live in fear every single day! Pass a law to make all Kenyans feel safe in a country they all love and adore!

Make Kenya a conducive place for all Kenyans to live! So, you beef up his security and the rest of us don’t have anyone to protect us?These politicians are literally stupid! I don’t believe Malala!

@malala - you can quit the senate if no body is willing to protect you! What are you going to do when the voters do not elect you in 2022?

Does an ordinary Kenyan have security officers protecting him/her! No!!

Anne Waiguru need to sanitize malala or baba someone do something....Security, wait 2022 he will be back farming in Kache-mega.

@malala - Kenyans die every day walking in the streets of Kenya, and some others are killed in their own homes while no one cares. So beef up security for all of us and you will be safe!

What is Malala doing that is causing others to want to kill him? Hard Drugs? Change your ways and you will be just fine!

Senator Malala - you never cried when your neighbor got gunned down in the streets of Kakamega! So, it only seems to hurt when it gets personal! We are need security protection but we have no one to provide it to us! Just deal with it!

@ Malala - my wife, my children and I have been crying every single day for lack of security since we voted for you! We had hoped you will fix the security situation in Kakamega but you have done nothing! Maybe you can do something now your life is in danger! Do you think you deserve another term as a senator? I think not!

It is a man’s world! So play dirty with those who are coming for you and everything will be fine! Or you can get a few fighter bulls from Boni Khalwale to protect you! He feeds them Bhang to be ruthless. That’s what you need!

I have never met a coward man from the mulembe nation! Malala, you are the first coward and hopefully the last one! What is your wife going to cry since you have emptied everything from your eyes?

Learn how to fight for yourself or talk to COTU’s Atwoli for a bull dog protection!

Quite chicky, embarrassing, very strange indeed Senator Malala! Why are you crying over the work you failed to do to make the people safe!? Why?? Develop a little thick skin just like my grand dad would say!!

Who is threatening you Malala! Ruto’s rouge gang!? Take it directly to Sugoi and he will never mess with you again!

Why do they want you dead.Security can be bought or should I say bribed crocodile tears can only protect you for so long

Buy an AK 47 or a M16,KAA MBAYA MBAYA.
Protect your self and family.
Or just hire your own security.

Crocodile tears. This dude sneaked Waiguru back. If you dog with the dogs you get fleas. Call Waiguru. Kirinyaga is not too far. It is even better to relocate to Kirinyaga.