'Let Him Go Back to the Streets Where I Found Him': Akothee Disowns 'Adopted' Son Shadrack Mwita 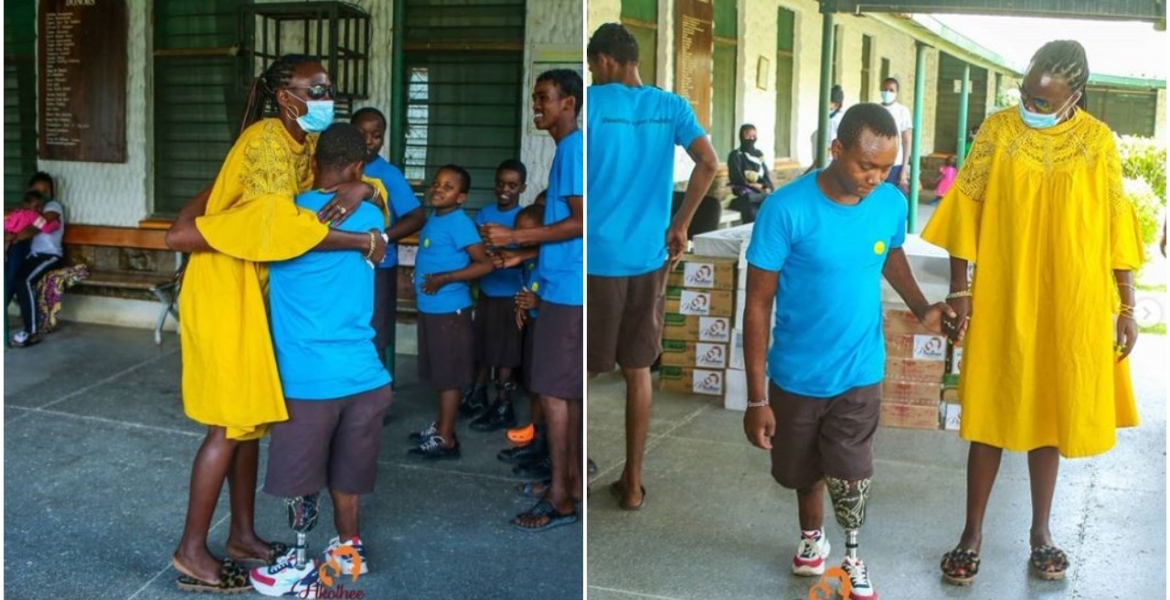 Akothee rescued the young man from the streets in May this year after learning the suffering he was going through having lost his left leg at the age of seven in a road accident where his mother died.

She took him to her house and transformed his life for the better by giving him shelter and had him fitted with a prosthetic leg.

Akothee wrote a series of posts on social media distancing herself from Mwita, saying the man turned against her.

“The day I picked up Shadrach Mwita, I broke up with my brother who is one of my confidants, he told me ‘Akoth don’t pick a lame person from the streets, you don’t know their background, shop for that boy and leave him, Akoth, Akoth leave that boy alone, you are not taking him anywhere.’ Me with my big head, I insisted and thought the boy needs help. He lied he is 18, so I thought he needs a mother love 💔, my bro became angry and drove off, leaving me with strangers since I didn’t want to listen to him. My bro abandoned me for quite some time and never stepped in my compound while mwita was there. One month later after fixing Mwita’s leg, he brought out his greed, misbehaved and hurt me deeply. I then sent him back to APDK (care centre), where I was paying 1000 per day as my anger calmed down,” Akothee wrote.

“While he was there I had so much pain that I could not even talk to him, I rather call the doctor’s to check on him. He would say he missed me and missed home, but I didn’t buy it anymore. I hated him instantly for brining pain to me innocently. 👉I had rented him a house next to my home, which he never cleaned at all, the land lady called me often saying the place is smelling and I had to employ for him a cleaner and someone who could show him how to cook for himself. And maybe take care of the modern toilet. This was before I decided to bring him into my compound,” she added.

Akothee says she tried to find a place in her heart to forgive Mwita but the man did not show any remorse.

“On the 8th of June at home, the following morning Shadrack refused to take breakfast. He then broke the news that I should go build a home for his grandmother and finally his family appears with demands. I was shocked and broken beyond repair. I tried finding place in my heart to forgive him, but my heart refused completely,” Akothee said.

She firmly stated that she does not want anything to do with Mwita henceforth.

“Now with those few remarks, I have never given birth to a child with the name Shadrack Mwita. I have my two boys in France and my 3 girls. They are well behaved and taking care of themselves. Don’t ever call me regarding any Shadrack Mwita I don’t know him nor his family. Let him go back to the streets where I found him. Unfortunately, Tuskys where I found him is closed, let him go to Naivas there are big cars passing there. I am done,” Akothee declared.

Akothee, you didn’t have to disclose all these & do not have to justify or defend your decisions! He’s of age and you didn’t adopt him legally. You’ve played your part and leave the rest to fate/God.

She is Venting her Anger. The BIBLE tells us to Vent our Anger before we sin. She is also WARNING other people against the Spoilt brat.

Akothee the young man needed rehabilitation. You cannot pick him from the streets and expect him to be a well behaved boy.

He is an Adult and beyond Repair. An Old tree is Unbendable.

You cannot pick up a grown man from the streets and call it 'Adoption'. He is fully grown, and so are his attitudes and values. You have to know and them first, before bringing him into your house. Just be thankful that he was not a thief, rapist or murderer.

Me think it was more of SYMPATHY over his Missing leg.

Am I the only one who finds spelling mistakes, and broken English on Mwakilishi, after I have thoroughly screened my post for such errors, before posting?

But why are humans so thankless. Mtu akikusaidia, mheshimu. Kenyans have a tendency to “ cut the arm that feeds you”

I think the part that is missing here is the counselling for the boy / man ..he should have gone through the transition to bring him on board .It is not his fault because he does not understand all that which us being said.

Akothee,dont give up,i have gone through that several times and all i do is delete and fotget the unthankful ones and continue with the needy ones as its my calling and there are genuine needy kids somewhere.Pole for the hurt,you will be well.

Your allegations aren't clear ...you just wanted to do away with the boy ...I'm thinking what if he was your biological son...would you disown him??

Unfortunately he is not her biological son. Huyu mtu is just to lazy, he was given a shop and a house. Lied that he is an orphan with no family eventually asking for Akothee to build a house for his grandma and take care of his family too.

Unfortunately he is not her biological son. Huyu mtu is just to lazy, he was given a shop and a house. Lied that he is an orphan with no family eventually asking for Akothee to build a house for his grandma and take care of his family too.

Akothee I feel you. I have been there for Family, Relatives and Friends. NO more.

Strangers (I have also helped) are even Worse.

Sorry kid!! Mama will knock you out!!!