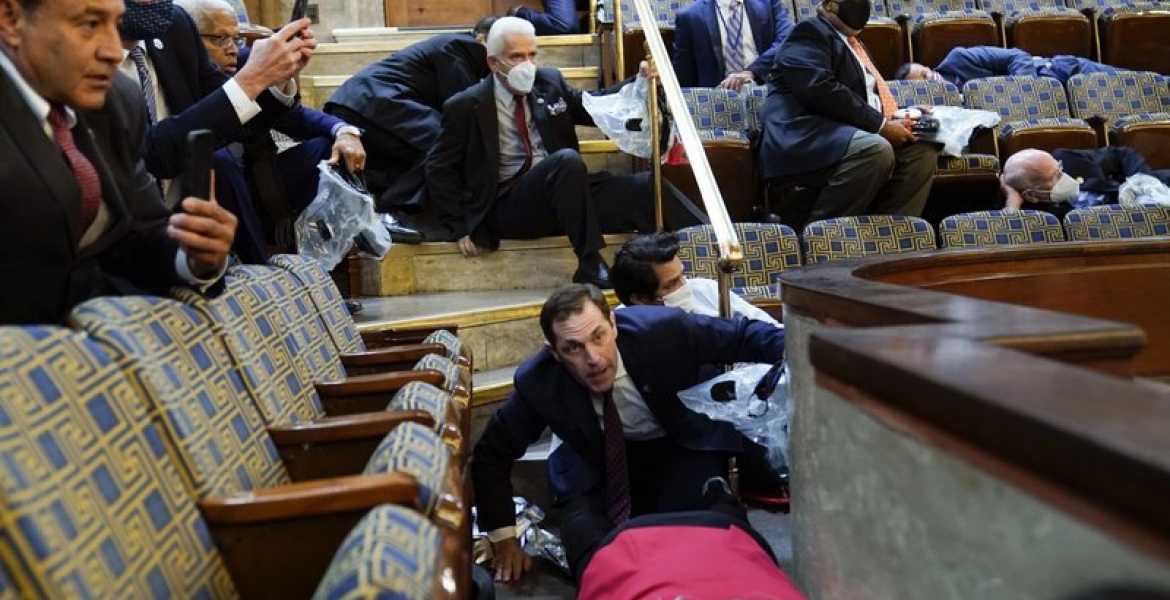 Dozens of people breached security perimeters at the Capitol and lawmakers inside the House chamber were told to put on gas masks as tear gas was fired in the Rotunda.

A chaplain prayed as police guarded the doors to the chamber and lawmakers tried to gather information about what was happening.

An announcement was played inside the Capitol as lawmakers were meeting and expected to vote to affirm Biden’s victory. Due to an “external security threat,” no one could enter or exit the Capitol complex, the recording said.

Both chambers abruptly went into recess. The District of Columbia’s Mayor, Muriel Bowser, issued a curfew for 6 p.m.

The skirmishes occurred outside in the very spot where president-elect Biden will be inaugurated in just two weeks.

Protesters tore down metal barricades at the bottom of the Capitol’s steps and were met by officers in riot gear. Some tried to push past the officers who held shields and officers could be seen firing pepper spray into the crowd to keep them back. Some in the crowd were shouting “traitors” as officers tried to keep them back.
More Stories:

A suspicious package was also reported in the area, Capitol Police said.

The skirmishes came just shortly after Trump addressed thousands of his supporters, riling up the crowd with his baseless claims of election fraud at a rally near the White House on Wednesday ahead of Congress’ vote.

“We will not let them silence your voices,” Trump told the protesters, who had lined up before sunrise to get a prime position to hear the president.

Note to Parents Today - Do not raise your little boys to become whiny little rascals.

This is not Kenyan related news. We don’t need this madness on this forum. Let cnn and others report this ratchetness of white men behaving badly without getting arrested.
One thing is for sure, Kenyan police would be whooping ass right now. No one would break in the parliament and get away with it.

This is a Raila moment-for USA. If he didn't win,the election was stolen! Trump had a mass protest in down-town Washington DC.

KK, this is a diaspora site and the news makes sense to lots of people here. Let's accept diversity...

Kenyan's learn. A woman was fatally shot in this madness!!!
Kenyan's need to find their own path!!

Why wouldn't you want to use the word protester instead of 'woman'? I am sure you're working really hard to appeal to emotions. Good luck with that though.

@Kenyanese, why do you prefer protester instead of her true identity? Yes, she is a woman and now we know her name: Ashley Babbitt of San Diego California. Why is being anonymous important to you. Emotions? it seems like the protesters/demonstrators are the once emotionally charged and enraged, ready to destroy and cause mayhem in the name of their crazy-delusional leader Trump. Anonymity and hiding behind a crowd seems like your thing. You must be one of those Rail's goons that he charges with emotions and drags them in the streets of Nairobi to break up things. beat up people, loot and cause mayhem because his election "victory" has been stolen. Sounds familiar ha! Remember Raila's capital hill offices- does it sound like de-ja-vu to you? Only after looking in the mirror, US Moab in the capital hill, and seeing Rail's madness and violence, do you then realize that we are going down a very dangerous road. BBI is our date with the devil. We shouldn't show up.

@Kenyanese, I feel you. Ruto is a mistake he is super corrupt and blood of innocent Kenyans is on his hands. We must move on and stop recycling same old used-up leaders. They feel entitled and corruption runs in their blood. Away with Kenyattas. Same with Odingas; Odinga Sr was vice president and Raila was prime minister. Mudavadi and Kalonzo were both vice presidents. We don't want them either. Gideon Moi is a wannabe who thinks Kenya is a Kingdom and that he is next in line just-like Uhuru did. We must try someone else. How about Fred Matiang'i? He is not a Gikuyu, Lou or Kelenjin, which, I think is a good thing. Or somebody else for that matter. By the way, its only my opinion.

How many people have been shot in Kenyan protests? It's the price one pays for being stubborn

God knows only if it were black people doing this. There would be a heap of bodies all round the capitol!

When you put idiots republicans in office, that is what you expect. For the first time in my decades of sojourn in the so called land of the free, I saw a replica of African scenarios in America. I mean chaos in such countries like Congo, Liberia, Niger, Uganda, Tanzania and of course, Kenya: only that these mobs were not throwing stones. Did I see a redneck attacking a police officer? Could it have been a black man, bullet holes would have been a parts of his body. White supremacists, racist KKK, are real in America. I got three beside me evry time I clock in.

@KK..is this not the same mess Raila, Miguna et al caused in the Kenyan elections? Same thing and if my memory serves me right, Raila's associates were invited to oversee this US election? Here, here in Mwakilishi I read that, so maybe those guys went in and introduced their chaos model in Trumps ears. Remember, the bible pledging...kura zimeibwa....throwing the toys out of his pram kind of tantrums, people dying in the protests...all has the hallmarks of Raila, MM et al!

@sukari, you may have apoint there.Raila and his cohort may have planted aseed of"election fraud" in Trumps mind.Never has any USA losing president has ever made any claim of fraid till now.If anyone, Hillary by virtue of winning the majority votes by over 3 million could have had a"legitimate" claim of fraid,but she graciously conceded.

Yap, Maxiley..the disgust I felt when I saw the chaos in U.S almost floored me. Who in their wildest dreams would have thought a democracy such as U.S could resort to such measures!! The inaction of the Police was very much akin to that witnessed when Raila was sworn in by MM. It was organised by the man on top right through to their forces. I for one will never respect the US after this. The writing was on the wall for a long time and this guy has been stringing them along since Obama left the seat. Savages.

I guess man is still a "beast" by nature...does not take much to cause a revolution.It usually takes some crazy leader who looks at opposition as the enemy,and any difference in ideology as a serious threat to be uprooted by all means.Remember in Kenya neighbors turned against one another, despite having lived next door peacefully for years.Wow the day science will figure how to contain man's wild,and dangerous mind,and contain it,is the day,I will start my church NEOSCIENSIOLOGY...

Ha, ha, ha! And on that note Maxiley....I will go make myself a nostalgic mug of Kenyan brewed tea. That's the only thing that throws me back to the peaceful Kenya we used to bask in!