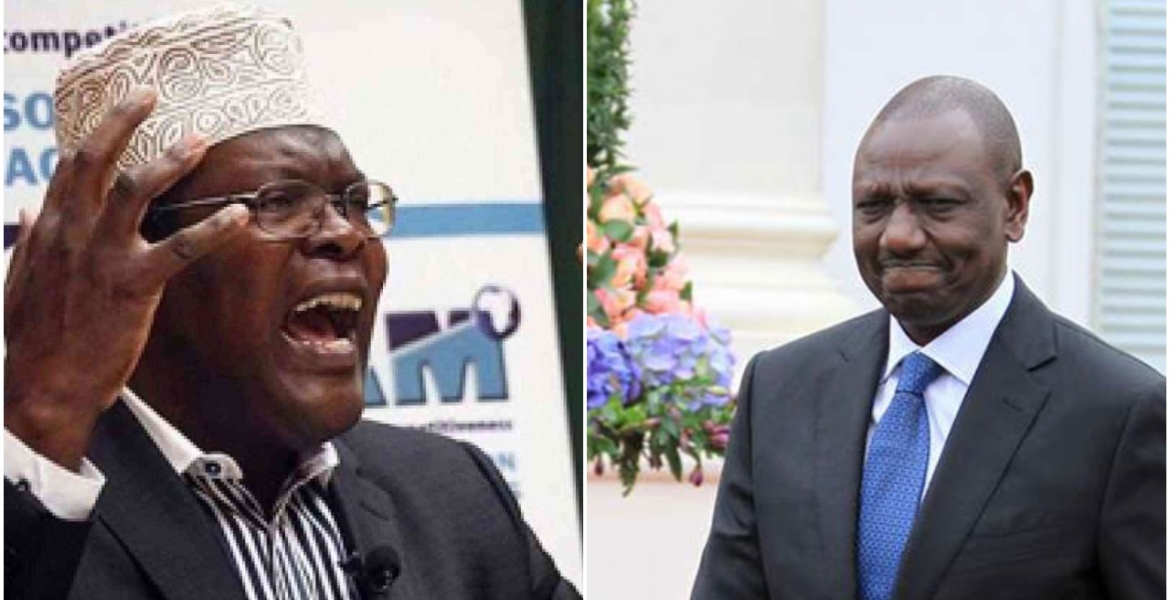 Through Twitter, Miguna questioned Ruto’s decision to throw his support behind Wanjiru, saying it goes against his so-called ‘hustler nation.’

"The Hustler Nation narrative/message is emotionally empowering to 99.9% of Kenyans. However, Kenyans deserve more than soundbites: They deserve leadership with integrity. Fronting Margaret Wanjiru for Nairobi is Anti-Hustlers," noted Miguna who has also expressed interests in the Nairobi Governor's seat.

Speaking at a church service in Nairobi’s Kayole estate on Sunday, Ruto declared Wanjiru as the hustlers’ candidate in the Nairobi gubernatorial election.

“I urge that Nairobians vote in a candidate who cares about hustlers and that candidate is Bishop Margaret Wanjiru, we will give her our full support," Ruto said.

Last week, the newly registered United Democratic Alliance (UDA) party, which has been linked to Ruto, picked Wanjiru as its candidate in the Nairobi gubernatorial by-election.

Wanjiru was issued with the party’s nomination certificate during the party’s official launch at its offices in Kilimani, Nairobi on Friday.

UDA whose symbol is a wheelbarrow rebranded from Party for Reforms and Democracy (PDR).

The Nairobi Governor's seat fell vacant following the impeachment of Mike Sonko who was found guilty of gross violation of the Constitution and other laws, abuse of office, the commission of crimes under the national laws, and lack of mental capacity to run the county government.

Ruto has no vision or development agenda for any hustler Kenyan besides promoting his thugs who, just like him, hide behind their gods. He wants to loot the country dry and kill a few getting in his way. He has done it before & he will do it again. He must be stopped.

Miguna Miguna - did not know Ruto and Wanjiru are seyamese twins in corruption and selling Kenya out to the lowest bidder? Did you expect Ruto to do any better! He is positioning Wanjiru there so they can keep on stealing if she wins! It is just the worst combination of a kelejin thief intertwined with a kikuyu woman thief!

Kenya government is borrowing beyond means of repayment. Getting to nine trillion while the counties right now do have the money. The government is indeed borrowing money to pay salaries. Before you ding of Ruto think of where your government is taking you.

Is Ruto not in the same government? All the money borrowed went into Ruto’s pockets! He is the thief! And by the way, what does a a kid without shoes from mogotio know about money? I’m talking about @assista!

🤣😂😅 the kid without shoes from Mogotio and the money!!

Go Miguna go!! Tell Ruto what you think about the shoddy guy! Ruto is trying to confuse nairobians so the can help him out of the second round at The Hague! Maybe @miguna Miguna can represent Ruto at the ICC!

Ruto is like a very bad preacher who tells the congregation only what they want to hear so he can get the offering.

Ruto is just telling lies to the hustler nation! He is inciting the most poor just like trump incited the thugs to commit insurrection while he is watching them from a safe distance! Ruto is a very good student of Trump!!

Ruto lacks integrity and decency and cares less about the Kenyan people. You should know that @Miguna miguna!

Miguna Miguna is the only dude who can destroy Ruto with his severed verbal diarrhea! Ruto won’t dare kill Miguna Miguna, like he did to Juma, because he knows Miguna will knock out his bulging white teeth!

Keep up the heat Miguna Miguna! You can even call Ruto a lone dog and on one would care!

This is one time I will agree with Miguna.
A thief endorsing a thief....
Kenyans please reject this breed of murderers and thieves.

Miguna Miguna knows that Ruto’s hustler talk will lead to a huge blob shed in Kenya! That is how Ruto rolls with blood in his hands!

Miguna - do you really thinking the guy you are addressing gets the message? This is what has caused all the problem we have in Kenya!

Having guys like DP Ruto, one of the most corrupt creatures in the world, is the serious problem Kenya is facing! And if you look further, just look at all the crooks ruto has drafted in the colt like realms of Ruto himself!

Do you not think we are in huge troubles??