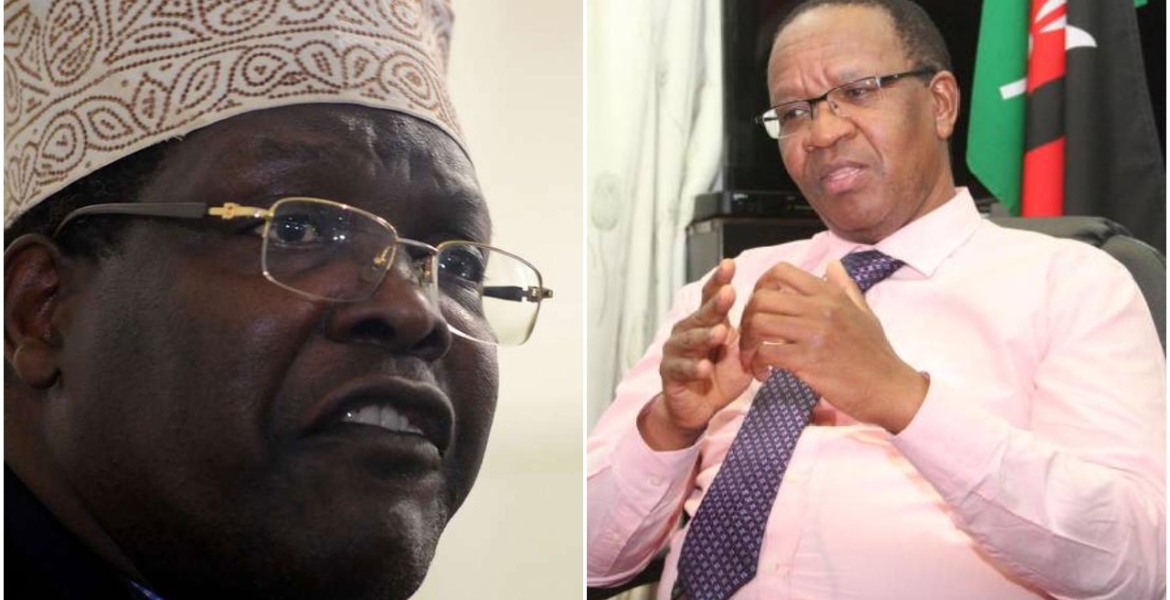 But responding to an application filed by Miguna at Milimani law courts, PS Kibicho states that no government agency has issued any red alert against the Kenyan-Canadian attorney to Lufthansa or Air France.

Kibicho in an affidavit dated November 17th asks the court to dismiss the petition by Miguna, arguing that it is based on hearsay and inadmissible evidence, The Star reported.

He adds that Miguna was advised to visit the Kenya High Commission in Ottawa and obtain an emergency certificate to enable him to travel to Kenya.

Miguna’s Kenyan passport was confiscated and destroyed following his illegal deportation to Canada in 2018.

Immigration Director-General Alexender Muteshi previously stated that Miguna needed to apply for a new passport in line with section 28 (1) of the Kenya Citizenship and Immigration Act.

“Miguna is at liberty to visit the Kenya High Commission in Ottawa Canada where he will be issued with a one-way (Emergency Certificate) to enable him to travel to Kenya,” said Muteshi.

Last month, Miguna disclosed that he used his perforated Kenyan passport to book his flight to Nairobi.

Kikuyus should stop blocking Luo’s from going to Nyanza.

Who is fooling who? The French Airline can’t simply block any Traveller for no apparent reason! There MUST be an alert that they can’t simply ignore.

Why does he need an emergency travel certificate while he’s got a passport?

Violation of human right it is.

@GG I don't know if you missed this part:
Miguna’s Kenyan passport was confiscated and destroyed.
Immigration Director-General Alexender Muteshi previously stated that Miguna needed to apply for a new passport in line with section 28 (1) of the Kenya Citizenship and Immigration Act. He could have obtained the travel document and only used it at his final destination. He chose otherwise.
Further on he admits his passport was perforated. A perforated passport is considered cancelled and therefore invalid for travel. Here's another fact for you. Canada requires Canadian dual citizens to transit to or through Canada by air using their Canadian passport only. In essence MigunaX2 is full of shit. He only produced his invalid Kenya passport in France. The rest of us who lost our citizenship due to the old Constitution went through the process to regain it. We did not use dubious means to get passports illegally. I disagree with the law as it stands but it is the law. Why is MigunaX2 above it and the rest of us. If he were elected to Kenyan office, would be pick and choose which laws he follows as he appears to be doing? A law was just signed about dual citizenship in Kenya. Would he also ignore this and retain his Canadian citizenship? None of MigunaX2 supporters ever address how he got his passport or why he won't follow current law. Help me out here and explain this please.

Why is it so difficult for miguna miguna to understand you have to have a passport or emergency travel document to enter the country?. To me he appears to be pulling this stunt for publicity but it's also expensive. He just has to go back to Canada and obtain an emergency travel documenta . International laws trump Kenyan laws every day. The high court in Kenya has no jurisdiction over international law, miguna as an alleged lawyer should understand this

Adopting the government of Israel policy on citizenship is the right thing to do now as far as Miguna Miguna case is concerned. If you have a tiny ancestry of “Jewish blood" running in your veins, regardless of your place of birth, you have a right to be an Israel citizen and given an Israel passport.
The US has a friendlier approach on who should be an American citizen. It does not matter where you were born as long as one of your parent is an American citizen. Children born out of these relationships are automatic American citizens.
The late freedom fighter in India the late Mohandas Karamchand Gandhi once said, "There are unjust laws as there are unjust men." What is happening to Brother Miguna Miguna is based on unjust laws implemented by unjust men and should be repealed. The judiciary made it very clear that Miguna Miguna’s citizenship should be reinstated and a compensation of seven million shillings given to him for his damaged personal property.
Miguna Miguna did not end up in Canada voluntarily. He is a victim of the late autocratic leadership of the late Daniel Kipkorios Toroitich Arap Moi. During his time in power, many Kenyans were jailed, tortured, and some even killed. His power (Toroitich) was greatly minimized after the fall of the former Soviet Union when he was no longer needed by the European or the American powers.
Let us burry that sad chapter of our history by granting automatic citizenship to all Kenyans who went to exile when life was totally unbearable in their mother country

Miguna should do what others who relinquished their Kenya citizenship, before dual status were a thing, did. Or has he and is still facing a problem?

If MM has done so n still cannot go home.... let him talk to Raila. Pause, remember the swearing in of the Peoples president; RAO should be in jail for that mock apisa-ring you helped him achieve while the witty flower girls were hiding under their beds, RAO should be in jail....but he is polished in his politics and relationships.....he knows to humble himself kikiumana. Since RAO cannot be put to jail, you cannot either. If they can jail RAOMM is being taught how to eat humble-pie. Raila learnt it thro' his journey of teargas, beatings and custration...he is humbled n knows how to take bread home to Ida, coz there lies his

Ever heard of Mwende Mwinzi?

IT'S TIME TO CLEANSE KENYA.
I KNOW FOLKS ARE READY TO PROTECT THEIR ETHNIC BROTHERHOOD, BUT WAY OUT, IS BY THE BULLET. THE BIBLE AND PRAYERS ARE NOT WORKING.
EVEN DURING JESUS TIME THEY HAD BARABBAS.
DURING JOMOS TIME WE HAD KIMATHI.
DURING MANDERA WE BUTELEZI..
MEANING FOR ANY FREEDOM TO PREVAIL, WE HAVE TO HAVE THE ARMED, TO INFLICT PAIN FOR THE ELITES TO HEAD TO THE NEGOTIATING TABLE.
REVOLUTION BASICS 101.